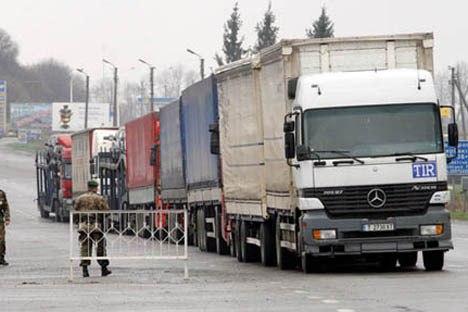 Despite the government's best efforts, Russian logistics services continue to be slow, bureaucratic and unpredictable, a new World Bank report has found. The quality of Russia's trade and transport related infrastructure is subpar even when compared to infrastructural facilities in other former Soviet states, according to the bank's Logistics Performance Index report published on Friday. Russia not only received declining scores in the survey's “ease of arranging competitively priced shipments to international markets” category, but also ranks low in the ability to track and trace such consignments or confirm whether shipments reach their destination.

Russia occupies the unenviable place of 94th out of 155 countries, sandwiched between Georgia and Tanzania, according to the regular Logistics Performance Index compiled by the World Bank. The leading states among post-Soviet countries, based on the assessment of the speed of cargo transit and registration, are Kazakhstan, which ranked 62nd, Uzbekistan, at 68th place, and Azerbaijan in the 89th place. Georgia, which has been investing heavily in surface-transportation infrastructure, and is in the process of expanding its railway network, ranked 93rd, one notch ahead of Russia. "It is interesting that Georgia, despite all the reforming in the sphere of logistics, shared a rather low score – 2.61 – with Russia, and occupied the 93rd line of the rating," said Alexander Karayev, an expert at the Center for Post-Soviet Studies at the Moscow State University. "Of course, virtual ratings do not exactly reveal the real state of communications in any given country, but they describe the general situation and supply data for comparison."

The World Bank experts assessed countries based on a one to five scale, ranging from "very difficult" to "very easy." Russia's customs procedures, which have always ranked near the bottom globally for ease of use, performed particularly poorly in the new ranking, scoring 2.15 out of five. Russian leaders have conceded as much. At a meeting on the country's investment climate in Sochi in August 2010, former President Dmitry Medvedev said the thought of having to deal with Russian customs officials is scaring potential investors away from the country. He ordered a reduction in the number of outdated customs regulations, the creation of a "green channel" for hi-tech goods, and an analysis of the influence of customs on falling trade volumes and business activity.

However, not much appears to have changed since then. About 44 percent of shipments are still inspected in Russia, compared to no more than three percent in the United States and Germany and just two percent in Britain. Companies still need to provide an average of eight documents to export goods from Russia, and 13 to import them, roughly twice the amount of paperwork required in developed countries, according to Economic Development Minister Elvira Nabiullina. “The inefficient customs service is one of the main barriers to business in Russia,” said Boris Titov, chairman of Delovaya Rossia, a pro-Kremlin business lobbying group. “Officials are worried only about following bureaucratic formalities rather than the possible costs they are inflicting on business.”

Along with customs services, the state of the country’s infrastructure is nothing to write home about, with the World Bank’s experts giving it 2.38 points out of the possible five. Part of the problem, experts say, is that Russia, like most other former Soviet republics, still relies heavily on infrastructure created in the Soviet era. "The poor condition of Russian roads and the lack of modern transportation hubs not only hamper the development of the logistics business, but also the entire economy," said Kirill Markin, an analyst at the Investcafe analytical center. Apart from being inadequate for modern needs, it slows down the modernization efforts and appears to create a perennial challenge for the Kremlin. Perhaps in an acknowledgement of such challenges, one of the first acts of the newly-inaugurated President Vladimir Putin was to order the government to establish a mechanism to attract foreign companies with advanced technologies to partake in road construction in Russia.

But industry executives say the Kremlin needs to do more to put its own house in order. For instance, a recent directive by the federal roads agency, Rosavtodor, limits the movement of vehicles carrying heavy loads on most asphalt-paved, federally-funded highways anytime the daytime temperatures exceed 32 degrees. Experts say the directive will inevitably result in unplanned downtime and financial losses for truck and shipping companies. "The current pace of infrastructure development around the country is very weak," said Rustam Yuldashev, the CEO and founder of STS Logistics. "Every slight increase in total freight traffic volumes puts a strain on the capacity of the nation's highways, rail lines and ports." Yuldashev said high transportation costs increase logistics companies’ overhead by up to 17 percent in Russia, compared to about nine percent in the United States or ten percent in Europe. "Without improving the transportation infrastructure, cost reductions at the sectoral level are impossible," Yuldashev said.