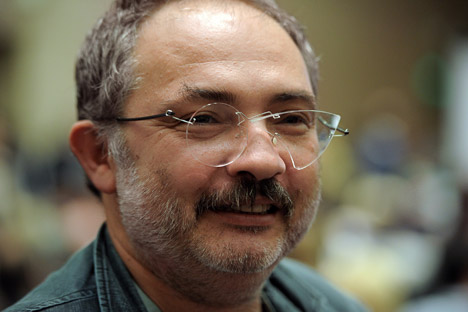 Russia's prominent gallery owner Marat Gelman: 'Non-conformist art was a local phenomenon. It was a very small group of people. Russia’s art world today is a hundred times bigger. We are talking about a whole art environment." Source: Kommerant

A man of many skills and deeds, Marat Guelman is Russia’s most well-known gallery owner, curator, political consultant and an inveterate provocateur. RBTH spoke to the man who calls himself a dissident.

Russia Beyond the Headlines: The two words used most frequently to refer to you are a gallery owner and a political consultant - a pretty odd combination

Marat Guelman: I became well-known in the 1990s when dealing art was my primary occupation. Gallery ratings had just emerged and the Guelman Gallery was always ranked first. Back then, being a gallery owner was an entirely novel concept. So I think that in a lot of ways I became a symbol. And Russia is a type of country where you only need single individual.

RBTH: But you managed to juggle that with political consulting.

M.G.: It was only unusual when I first started. It was in 1996 - I was running my gallery and at the same time co-founded the Foundation for Effective Politics, along with [former advisor to the Presidential Administration] Gleb Pavlovsky. At that time, it was quite rare, yes. But now it is entirely normal. Just think about it:  head of Putin’s presidential campaign was a film director, head of Mironov’s presidential campaign was an actor. It is quite funny.

RBTH: Recently you held a press conference in which you and Aidan Salakhova announced that you are closing your galleries, while another old art gallery “XL” will transition to another format. What is happening to the Russian art market?

Marat Guelman is well-known in Russia as a publicist and the owner of many galleries, including the eponymous Marat Guelman Gallery. He is the head of the Modern Art Center and Perm's Modern Art Museum. In addition, he owns the Guelman Graphics design studio. According to Artkhronika (Art Chronicle) magazine, Guelman is included the list of the Top 50 most influential people in Russian art. First and foremost, he has left his mark on contributing to the cultural development of the Perm Region where he heads the Modern Art Museum. He is also well-known as a political expert. Guelman is the co-funder of the Efficient Politics Fund, one of Russia's largest research centers for political studies. He left the center because of differences with partner Gleb Pavlovsky.

M.G.: Over the last two years the gallery has stopped bringing profit. I can only speculate as to the reasons, but I think the main issue is that the present environment in Russia is not conducive to good market conditions.

RBTH: What about non-conformist art?

M.G.: Non-conformist art was a local phenomenon. It was a very small group of people. Russia’s art world today is a hundred times bigger. We are talking about a whole art environment.

Also, most wealthy people in Russia are now either state bureaucrats or people affiliated with the state and they are not interested in revealing their income, which means they don’t collect.

RBTH: You have attributed poor sales to the fact that many buyers are leaving Russia.

M.G.: When we looked at our list of clients – people who have purchased our art from 1996-2008 – we saw that more than 80 percent of them now live outside of Russia.

RBTH: If such veteran galleries are closing, what is going to happen to the others?

M.G.: They should take advantage of it. This is an opportunity for younger galleries to show the ambition and fervor that the more established galleries have lost. If they can find the kind of enthusiasm that we had in the 1990s when we felt like we were ushering in a cultural revolution and use their management skills, they could even do a better job.

As Nikolai Palazhchenko [art critic – RBTH] said, pioneers create the niche and those who come afterwards make money off of it.

RBTH: Who are the biggest patrons of the arts in Russia?

M.G.: Semenikhin, for instance. [Vladimir Semenikhin, founder of Cultural Foundation “Ekaterina”]. Sergei Gordeev [founder of the Russian Avantgarde Foundation]. I don’t want to give names, but they are very important people with big collections. However, more than half of them now reside outside of Russia. Of course, you shouldn’t forget Dasha Zhukova.

RBTH: What is the chance that Russian art will at some point hold sway over the market?

M.G.: I dare say it has an obligation to. But it doesn’t depend on the artists alone. You see, art is a type of business where you only need a handful of artists to make a breakthrough. Take Sensation, for example. The original exhibition featured only eight artists, who later changed the entire British art scene.

If there were a similar concerted effort to find and invest in talented artists, perhaps we could see a change in the status of Russian contemporary art.

RBTH: What role should the government play in this process?

M.G.: There are some good examples of how that’s done in other countries. In the U.S., for example, business is the main investor in the arts and it happens to be a very effective set-up. But they have developed effective tax legislation, which gives investors tax deductions. Unfortunately, it wouldn’t work in Russia, because it would breed criminality. Our mentality is such that any form of financial incentive would lead to various corruption schemes.

I have found that municipalities make the best partners, because they are interested in the same thing as the artist. Also, Russian regions are in such a lamentable state they stand on equal footing with the arts. They are not in a position to set terms because they need the arts as much as the arts need them.

RBTH: You are now engaged in cultural policy-making yourself. You are the director of the Perm Museum of Contemporary Art – part of a larger effort to turn the city into a cultural capital. What were your motivations for the endeavor?

M.G.: I was 47 at the time and I was going through a mid-life crisis. The gallery was doing perfectly well without me and I felt like all the projects I undertook and the people I worked with were only making use of my name and not my skills or talent. And when Perm came up it promised to be a real gamble. No one thought it was going to work out.

M.G.: You know, I was recently at a museum conference at the Pompidou Centre in Paris and my colleagues from other museums were offended when they heard that Pompidou was only willing to work with the Perm Museum of Contemporary Art. It is now more integrated into the world museum scene than any other Russian museum.

RBTH: What about turning Perm into a cultural capital? How much of that plan has been implemented?

M.G.: Around 10 per cent. We wanted to turn Perm into a normal European city with a rich cultural life. For the moment, however, there is not enough drive for that. So, what we did is we organized a festival, called “White Nights.” It runs for one month. And the hope is that we will see the concept slowly gain a foothold.

In addition to that, we have opened the Museum of the Permian, the Stage-Molot Theater, the Perm Art Residence. We are also about to open the Photography Museum and the Choreography Theater.

RBTH: Still, don't you think that some aspects of the project seem out of place in a city like Perm. Take, for example, the Red People scattered across the city. They look quite incongrous and forced against a run-down Soviet landscape?

M.G.: This is one of the most common complaints that we get. They say things like, “What you are doing is great, but it makes the remaining Soviet architecture look even more miserable,” or “You call Perm a cultural capital, but our streets are squalid.” You have to understand that when we developed the 20-year master plan, we decided that we would start by introducing art that would highlight the ugliness of the city and call for its transformation. Perm’s last mayor told me he started getting twice as many complaints to have the streets cleaned.

RBTH: Do you think of yourself as a liberal?

M.G.: I do, though I have never fought for political power or been part of the opposition. But I always say what I think. I present alternatives. Without trying to change the whole system I want to prove that things can work differently.

RBTH: Pussy Riot’s performance at the Christ the Savior Cathedral is mainly seen as a political protest. But what do you make of its artistic value?

M.G.: I refuse to debate the artistic value of their performance while the girls are still in prison. The most important thing right now is that they are released.

RBTH: Many Russians are already too wary of contemporary art. Don’t you think their performance has only exacerbated this attitude?

M.G.: I can’t even begin to tell you how many problems I have had because of Pussy Riot. At the same time, radicals perform a very important function. On Dec. 10 [during an election protest in Moscow] artists realized that they were no longer the social avant-garde. Society proved that it was ahead of them, that it was more radical. It was a lesson to them, a reminder that there was still no democracy, no freedom of speech and that they should resist being integrated into the system.

RBTH: The case against Pussy Riot appears to be in limbo right now. What resolution do you think is the most realistic?

M.G.: There is only one solution. The girls should be released. Then the charges brought against them should be changed