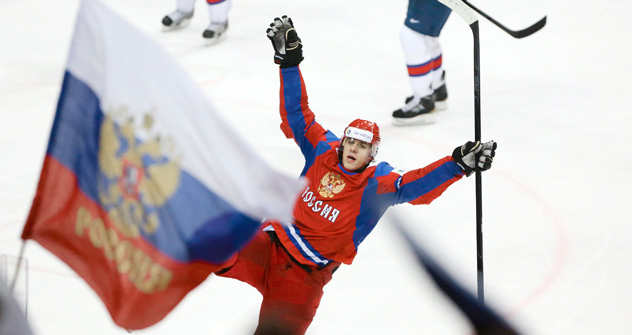 Russia trounced Slovakia 6-2 in Sunday's final to win the world hockey championships title for the fourth time in the modern era and the first time since 2009.

Two goals from Washington Capitals wing Alexander Semin, and four more from Alexander Perezhogin, Alexei Tereshchenko, Pavel Datsyuk and tournament MVP Evgeni Malkin sealed the victory, which marked a clean tournament sweep of 10 wins. It was an emphatic return to the summit of world hockey for the Russians, who, despite entering as top seeds had a lot to prove after last year's fourth place.

The tournament cemented Malkin's status as the world's top forward, finishing the competition with 11 goals and eight assists. The result also justifies the appointment as head coach of Zinetula Bilyaletdinov, announced last June. The 57-year-old was entrusted with taking Russia through the world championships to its home Sochi Olympics in 2014, replacing Vyacheslav Bykov, who took the fall for the 2011 collapse.

The Slovaks opened the scoring a minute and six seconds into the first period, the moment after Semin registered the Russians' first shot of night. The Boston Bruins captain Zdeno Chara shook off Alexander Ovechkin to hit an unstoppable shot from the blue line next to the boards out right that flew into Semyon Varlamov's top corner. In response, Denis Kokarev flew down the left to smack a shot across Peter Hamerlik's goal that the goaltender palmed away.

Six minutes into the period Kokarev collected a pass from Semin but had a point-blank shot clawed away from Hamerlik. Ilya Nikulin spurned a clear chance nearly 10 minutes in, one-timing a shot on an open goal that defenseman Ivan Baranka got a flying stick to.

But the Russians turned their pressure into an equalizer seconds later when Ovechkin skipped down the left and fed it square through a defenseman's legs to Semin, who buried the puck in the corner. Slovak forward Milan Bartovic tested Varlamov's reflexes from the left later in the period.

Any of three shots that opened the second period could have put Russia 2-1 up, with Malkin's final slapshot bouncing back off Hamerlik. It was Perezhogin's fourth goal of the competition that did put the Russians ahead. He directed the puck goalwards after collecting it from Alexander Popov, and neither Chara nor win Tomas Surovi could keep it out, falling over each other on the goal line. Ovechkin went close 13 minutes into the period, hitting from the left as he slipped.

The Russians punished slack defending to go 3-1 up moments later as the Slovaks lost the puck inside their own blue line. Sergei Shirokov fed Tereshchenko for the Ak Bars Kazan center to ram it home. Four minutes remained in the second when Russia increased its lead further. Detroit Red Wings center Datsyuk set up Semin, who flashed the puck over a helpless Hamerlik and into the roof of the net.

Slovakia lost possession cheaply early in the third to allow Russia to put a sheen on the scoreline. Ovechkin near the boards shot the puck to Semin, who in turn directed it to Datsyuk to steer under Hamerlik.

There was small consolation for the Slovaks later in the period, as Chara grabbed his second of the match with Ovechkin off for slashing. Surovy claimed a clever, reverse-pass assist. Malkin rounded off the tournament in typically brilliant fashion, jumping over the boards onto the ice, collecting the puck, rounding a defender and slamming home.

The Czech Republic beat Finland 3-2 in the bronze medal match earlier Sunday. It was the Czech's third-straight bronze at world championships, and left the reigning champions off the podium. Russia failed to find its rhythm early in the competition, registering nervy wins over minnows Latvia, Norway, Germany and Denmark. They stepped it up a notch and a Malkin hat-trick announced their challenge for the title with a 7-3 win over Sweden.

Russia beat the Czechs 2-0, Italy 4-0 mad Norway 5-2 to score a semifinal rematch with hosts Finland that failed to prove the stumbling block many expected. A second Malkin hat-trick pushed them past the Finns 6-2, exacting revenge for a 3-0 defeat in the 2011 semifinals.

The Czech Republic beat Finland 3-2 in the bronze medal match earlier Sunday. It was the Czech's third-straight bronze at world championships, and left the reigning champions off the podium.