A night at The Human Library 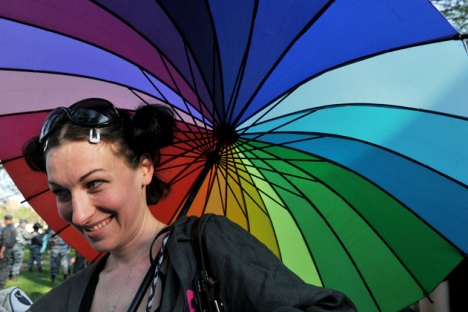 One of the gay rights activists takes part in their rally in Saint-Petersburg on May 17, 2012. Source: AFP / East News

In the wake of a legislative attack on the LGBT community in a number of Russian cities, “The Human Library,” an innovative project designed to promote dialogue, reduce prejudices and encourage understanding, opened its doors in Moscow.

A young man approaches me, his eyes bright with curiosity.  “Who are you?” he asks.

“What kind of Patrick?”  It’s a strange question; I'm not entirely sure how to answer it.  “Are you gay?” he continues.

“Are you an anarchist?”

The man shrugs his shoulders, looks me up and down once more and then, satisfied that the interrogation is over but evidently unimpressed by my answers, leaves without exchanging a further word.  A split second later I am cursing myself for the choice of phrase “just a normal person.”

Many more difficult questions of identity lay ahead during the course of the night.  It was exactly these kinds of questions, and perhaps even some of their answers, that The Human Library was designed to provoke.  Over 100 young and curious Muscovites assembled for the event in a small public library near the city center just before midnight in last month.

The format, we had been told, was simple, and worked along the same principles as any ordinary library. Visitors were invited to choose a “book” to “read” for 30 minutes before returning it to the library. But in this case, the books were people, and the reading consisted of conversation.  The participating “books” represented minority groups in society, often those who are discriminated against on the basis of their race or sexual orientation.

The idea of a human library was the brainchild of youth activists from a Danish non-governmental organization called “Stop the Violence.” The first event was held at the Roskilde Music Festival in 2000. Since winning the support and funding of the Council of Europe in 2003, the project has spread to over 50 countries worldwide. The Human Library first came to Russia in fall 2011 and since then has been held in a number of Russian cities.

And so, for a number of those present, the format was nothing new.  As we made our way to our first readings, Maria, a participant at a previous event in Kaliningrad, explained the appeal: “I was very impressed in Kaliningrad. Each time I talked with someone, I tried to think how I would try to live my life in their situation.” If Maria’s experience is typical, it seems that The Human Library is having some success. This should be very welcome, given the recent signs that the empathy it seeks to promote may be in short supply in contemporary Russian society.

On March 30, a new law, banning the “propaganda” of homosexuality, bisexuality, transgenderism and pedophilia came into effect in St. Petersburg. Those charged with breaking the law face fines of up to 5,000 rubles ($160) for individuals and up to 500,000 rubles ($16,500) for organizations.  The legislation, which had already been enacted in the Russian cities of Ryazan, Arkhangelsk, and Kostroma, came as a particular shock in St. Petersburg, the second largest city in Russia and the city that is traditionally regarded as the country’s cultural capital and its “window to Europe.”  Most recently, the legislation has been adopted in Novosibirsk, Russia's third-largest city, and there is discussion among Moscow lawmakers of introducing it at the federal level.

Critics of the law point out that the enigmatic wording gives little clues as to the nature of what constitutes “propaganda.”  In theory, even the wearing of a rainbow pin could open someone up to prosecution under the law.

Additionally, this trend is legislation is mirrored by a possible growth of homophobic sentiments, which has been highlighted by pollsters at the Levada Center. Their research shows that the number of respondents who think gay people should receive medical treatment, be isolated or altogether removed from society, has risen from 53 percent in 1994 to 67 percent in 2010.

It was with these thoughts in mind that I sat down to my first “reading” with Alexandra, a lesbian in her early 20s.  Three other young Russian women were also present.  Given the momentous importance of the legislation currently spreading through the country, their first questions for Alexandra – whether she wore dresses, how she could gauge another woman's sexuality – seemed frivolous.

Trying to raise the tone of the discussion, I asked Alexandra why there was so much fear of homosexuality in contemporary Russia.  “It was hidden for too long under the Soviet Union,” she explained. “People don't know that we are real people and they are afraid of what they can't understand.”  I asked her what could be done about the situation and her answer, on the surface, seemed simple: “People need to smile more!” she said.

There was little evidence that the participants in The Human Library were deficient in this regard.  Everyone seemed to be enjoying themselves, gathering in between readings to swap notes and exchange their impressions.  Even as the night wore on into the early hours of the morning the participants, fueled by a mixture of youthful curiosity and free tea and coffee, never lost their enthusiasm.

By the time I got to my final book of the night, it was nearly 4 a.m. Even names were not given before the “readings;” books were chosen entirely by their often one-word titles. Sitting down for a discussion with a man known only as “gay” is a powerful reminder of the effect that social labels can exert on individual identity.  Thus there was a palpable sense of relief after the young man, Pavel, introduced himself to us.

After finding out that Pavel was a lawyer, I soon felt sufficiently emboldened to seek his views on the St. Petersburg legislation.  His answer was surprising: “Overall this law brings more benefit to the LGBT community than it does harm.  The law will be difficult to execute and prosecutions will be few.  Meanwhile the question of rights for the LGBT community has been thrust into the public sphere.”

It was during an absorbed discussion a few moments later on the question of parenting rights for same-sex couples that Pavel's answer really began to resonate.  The kind of debates and discussions that I heard at The Human Library are discussed regularly by British teenagers while they are still at school, yet many of the participants at this event seemed to be discussing them for the first time.  In such a context the earlier question about Alexandra's attitude to dresses appeared far from frivolous.

Lyubov, a young woman and one of the event organizers, agreed. Having torn herself away from her demanding role she found a few minutes to talk about The Human Library and its significance in Russia.  “Very few children in Russian schools discuss the questions that are voiced here.  I would like to see events such as this reach them,” Lybov said.

In the meantime, The Human Library is set to open in a number of other Russian cities.  Lyubov is sure that they will have a positive influence: “It's impossible to defeat prejudice overnight,” she explains, “but I see great reactions taking place here between the participants.”

Pavel was right to suggest that the recent legislative attacks on the LGBT community have thrust questions of greater social understanding into the public sphere.  The role of events such as The Human Library and the dedicated people who participate in them is to keep them there.