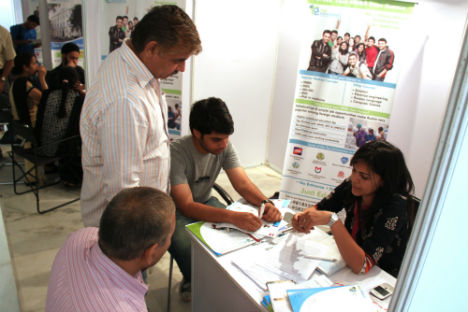 “Indian students adapt very easily and like to study,” said Mikael Davtian, Dean of the Faculty of Economics at RUDN. Source: Olga Nikushkina

Ten Russian institutions of higher learning are participating in an education fair in India to attract the much-valued Indian students. The impressive turn-out the opening ceremony showed the future of India-Russia education ties is indeed bright.

Top Russian universities have unleashed a charm offensive in India. The annual Russian Higher Education Fair is currently on in New Delhi and will be soon moving to other major cities like Mumbai, Chennai, Kolkata, Jaipur, Trivandrum, Coimbatore, Madurai and Ahmedabad.

Organised by the Rossotrudnichestvo Center in India and the Russian Center for International Education (RTsMO), the exhibition seeks to promote the interests of Russian colleges and universities in the Indian market, to recruit students and develop Russian-Indian intercollegiate cooperation.

The exhibition-fair opened on May 17 at the Russian Center of Science and Culture (RCSC) in New Delhi. Ten Russian institutions of higher learning from seven cities in Russia are targeting Indian high school graduates. These include the Tver State Medical Academy (TGMA), the Moscow Energy Institute, the Moscow Aviation Institute, Volgograd State Medical University and Peoples’ Friendship University of Russia (RUDN).

Candidates would be given consultations concerning education in Russia as well and help in preparing and legalizing documents, said F.A. Rozovsky, head of the Rossotrudnichestvo Center in India, on the opening day of the fair. He assured that the Russian Center of Science and Culture and the Russian embassy in New Delhi would do everything to support potential applicants to Russian colleges and universities. Dr. Prasanna Kumar Patasani, a deputy in the lower house of Indian Parliament and the guest of honor at the ceremony, stressed on the critical importance of developing relations between Russia and India in the field of education.

The exhibition elicited an enthusiastic response. Some 150 Indian high school graduates turned out for the opening ceremony. Potential candidates gathered in the center of the hall and then went from one stand to another to see what’s on offer for them.

A group of relatives — three boys (Mohit, Sachin, Sunny) and two adults (J.C. Sharma and Sh. Pritam) — showed a great deal of interest in Tomsk State Polytechnic University and flooded the Tomsk official with a host of questions regarding the application process. “We want to find everything out, and then make our decision. We are interested in economics and engineering,” said Sharma.

“A Russian education appeals to us for its relatively low cost, and also because our countries are friendly and generations of Indians have been educated in Russia. We have friends who studied in Russia. However, we are considering other possibilities as well,” he added.

Pyotr Krug of the Moscow Energy Institute (MEI) said that the MEI, too, is looking forward to receiving Indian students. The MEI has created a special section where courses are taught in English; it accepts about fifteen new students every year, primarily from India. There is also a section for foreigners where courses are taught in Russian (here the choice of professions is greater); it accepts some 50 new students every year. “The energy sector is developing rapidly in India; there is a government programme to develop national energy. Therefore, there is also a demand for specialists in this field,” said Krug.

Talking to students, one found a medical education in Russia has much appeal for a lot of them. Aashray Khannai and Dominic Massey said that they were particularly interested in medical specialties, including cardiology. “We want to receive an education abroad and therefore we are curious about what different countries can offer. What matters most to us are the conditions inside the country. We like what Russia has to offer but we have to talk it over with our parents. We may come back here with them,” they said.

The reason for the popularity of Russian medical schools in India, according to Kamruzzaman Sayed, director of RTsMO and vice dean of the international faculty of TGMA, is because a majority of those medical students who return to India from Russia pass the qualifying exam. According to Indian law, any graduate of a foreign medical school must pass a qualifying examination in India. “I’m proud to say that of our most recent graduates, 97% have already passed the qualifying exam because the preparation of doctors in Russia is very good. And at TGMA, specially for our Indian students, we invite teachers who can help them prepare for the exams administered by India’s Medical Council.”

Foreign students have studied at the Tver State Medical Academy for more than fifty years. It currently has some 800 students enrolled from India alone. “This year we are expecting some 200 students from India,” said Sayed.

The second most popular specialty among Indian students is the Russian language. Nama’s dream is to enroll in RUDN and study Russian there. “I began studying Russian at RCSC,” he explained. “I did fairly well. Then I spent ten months at the Pushkin Institute in Moscow. I am sure that Russian will be in demand in India.”

“Our countries are friends, and contacts between them are constantly developing, so specialists in Russian will be needed,” he added.

Nama, however, rues a dearth of scholarships for foreigners: “It seems to me that it would be to Russia’s advantage to accept a greater number of foreign students who are studying the Russian language and Russian culture. But for that you need more scholarships and a decent stipend. India, for example, gives scholarships to foreigners studying Hindi. We are hoping that the situation will change.”

Indian students are a big draw with Russian colleges and universities where they are well liked and eagerly awaited. Sayed, the director of the Russian Center for International Education,  said that the center has sent more than 10,000 Indian students to Russia. The center has offices in New Delhi, Chennai, Calcutta, Mumbai, Bhopal, Hyderabad and Bangalore.

“Indian students adapt very easily and like to study,” said Mikael Davtian, Dean of the Faculty of Economics at RUDN. “In order to increase the competitiveness of our university, RUDN is now offering Master’s degrees in a broad range of subjects that are taught in English. Moreover, this year a delegation from RUDN will visit Jawaharlal Nehru University (JNU) and conduct negotiations concerning the development of bilateral ties. And this year we are expecting some forty students from India.”

Student safety is a high priority. Foreign students sometimes need purely practical advice about everyday life since cultural differences do arise, and some of them could be painful. Not long ago, for instance, some Indian students had problems celebrating Dussehra (a Hindu festival marking the victory of good over evil). In certain Russian universities, these students tried to burn effigies of Ravana (the god of evil) with accompanying pyrotechnics. This sort of fiery celebration is strictly forbidden by Russian fire inspectors. Indian students planning to study in Russia, say organisers of the education fair, must be well-versed in cultural subtleties and must be told what they can and cannot do.