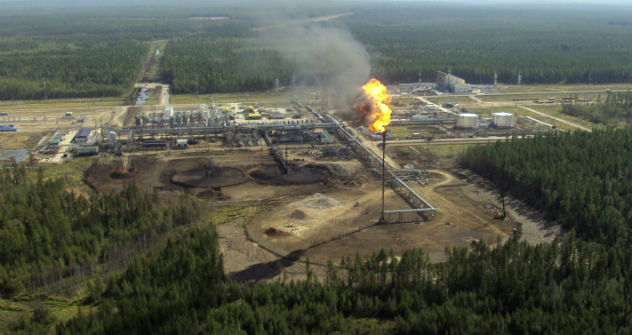 A huge flame burns off gas at an oil drilling station on an oil field in Verkhnechonsk, in Eastern Siberia. Source: Reuters/Vostok-Photo

A new state-run company with vast powers may be created to transform Siberia and the Far East into a dynamic economic region.

It’s one of the pet projects of President Vladimir Putin that seeks to transform the economic landscape of what is called the new 'Far East Republic' through creating a new state corporation. According to the draft of the federal law, the proposed corporation to develop eastern Siberia and the Far East will have direct access to land and natural resources in 16 Russian regions (comprising 60% of the country), bypassing laws on natural resources, forestry, land distribution, according to a leaked copy of the bill. The corporation is supposed to hand out mining licences in the mineral-rich region, bypassing state agencies.

The corporation is supposed to be granted the right to allot licences to mine for natural resources such as gold, which is currently only authorised by the federal and regional governments. The entity will be reporting directly to the president, while other state agencies will not be able to interfere in its decisions.

This overarching body would get 500 billion rubles ($17 billion) worth of stakes in energy, resource and infrastructure companies like RusHydro, Russian Railways, diamond company Alrosa, the Inter RAO energy holding, and the Leninsky Riverboat company. The corporation would also receive unprecedented oversight in the decisions of major state monopolies like Gazprom and Transneft, Kommersant newspaper reported. With its headquarters in Vladivostok, the corporation would get significant tax breaks – such as a zero percent profit tax – as well as rights to develop projects on lands owned by other entities. Federal funds would subsidise travel and living expenses for Russians and foreigners employed in the corporation’s projects. Funding could come from the $90 billion National Well-Being Fund.

In view of the corporation’s sweeping powers, government sources are already dubbing it “a state within a state.” “In essence, a parallel government is being formed that will be [controlled] by [President Vladimir] Putin personally,” says Rostislav Turovsky, an expert from the Center for Political Technologies. “This will limit the powers of Medvedev as prime minister. The country will be split into two parts, just like under Ivan the Terrible, with the zemschina and the oprichnina. One part will be run by Medvedev, and the other by this state corporation.” Medvedev will assume the prime minister’s past under a pact Putin and he made public last fall, but speculation is increasing that Medvedev may not hold on to the position for long. Meanwhile, First Deputy Prime Minister Igor Shuvalov said that the Far East development goals may be achieved through an affiliated company of state-run development bank Vnesheconombank. Both options are being evaluated by the government. “We have decided that the region should be developed, but we are still discussing in what way this should happen,” he said on the sidelines of a Russia-China economic forum in April.

Putin pledged to revive the Far East and set up a state development corporation as part of his re-election campaign platform. He also named the Far East as one of five key priority areas for the Russian economy in a speech to the Duma in April.

While the state company was being created in order to manage state resources more efficiently, one of the main challenges is how it will work with regional governments. “This is the most difficult issue that we have yet to resolve,” Mikhail Tersky, a professor at the Far East Federal University, said. “Projects in the Far East (new bridges, roads) are costly rather than profitable,” he said. “But the state company will be launching projects to generate income, and it will make significant demands on the regional government. There are certain organisational and financial problems for the administration.” Tersky, who was involved in drafting the original idea of the state corporation in January, said the company would seek both state and private funding for its own projects and for those of the regional government.

Other experts were positive, saying the initiative would speed up development of mineral deposits within the next 10 years. “A key question is about the balance of power between the center and the regions,” said Dinnur Galikhanov, senior metals and mining analyst at Aton. “It is possible that regional authorities won’t be able to influence the project. I think no one wants this, so there will still be a lot of consultations on this issue.”

Analysts argue that as the bill has yet to be submitted to the Duma, it is too soon to tell whether some of its controversial points will even make it into the final draft. The bill will unleash a slew of investment opportunities to develop resources worth billions of dollars such as gold deposits in the Sukhoi Log site in the Irkutsk region, iron deposits and undeveloped oil fields in the Krasnoyarsk region, and coal in the Tuva republic. Turovsky added that the move was likely geared to promote the investment opportunities ahead of the Asia-Pacific Economic Cooperation summit, to be held in Vladivostok in September.