Kolomna: Fortress in the Russian heartland 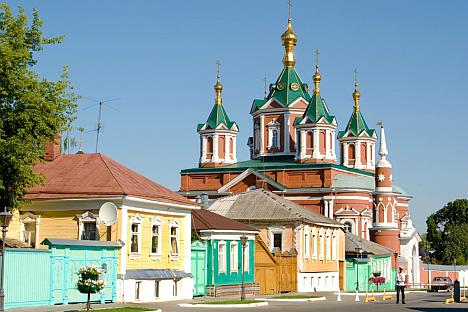 Kolomna is one of the most appealing of Russia’s provincial cities. Picturesquely situated at the confluence of the Kolomenka and Moscow Rivers, this small city (population around 145,000) is easily accessible by car or train. Despite its proximity to Moscow, some 60 miles to the south, Kolomna's rich cultural history has allowed it to maintain a distinct identity. Its monasteries, which add so much to the historic silhouette of the town, are being carefully restored.

The earliest mention of Kolomna in medieval chronicles refers to a clash in 1177 between Vsevolod of the Big Nest, grand prince of Vladimir, and his rival prince, Gleb of Ryazan. Such local struggles were frequent among Russian princes in the 12th and early 13th centuries, but they were soon followed by the far more devastating Mongol invasion of 1237-1241. Overwhelmed in the initial attack, Kolomna was ravaged in 1237, although not without fierce resistance. Kulkan, the youngest son of Genghis Khan, was killed during the battle for Kolomna.

From the beginning of the 14th century, Muscovy's princes valued Kolomna as a strategic citadel guarding its southern border. Located not far from the point where the Moscow River flows into the Oka (the major western tributary of the Volga), Kolomna was traversed by trading routes from much of central Russia. This movement of goods through the town created the basis for an enduring merchant culture.

Despite its increasing prosperity, Kolomna experienced a number of catastrophes in the 14th century, including an outbreak of plague in 1363 and looting by the army of Tatar khan Tokhtamysh in August 1382. Yet during the same period, Kolomna proved its resilience in 1379 with the construction of its first large church, dedicated to the Dormition of the Virgin. It was in the shadow of this church—since completely rebuilt – that Moscow’s grand prince Dmitry Donskoi held a prayer service in preparation for the great battle against the Tatar khan Mamai at Kulikovo Pole in September 1380. The earliest stone church from this period, dedicated to John the Baptist at Gorodishche, is located on the outskirts of Kolomna and has been dated to the late 14th century.


During the 16th century, Kolomna benefited from the largess of Moscow’s Grand Prince Basil III (1479-1533), who replaced the log fortress with massive brick walls that signaled the town’s importance as a citadel on Muscovy’s southern flank. Built between 1525 and 1531 to a total length of 1.2 miles, these walls can be compared with those of the Moscow Kremlin. Of the original 16 towers, seven remain, including one gate tower. The last serious military ordeal faced by Kolomna occurred in the early 17th century, when the town was assaulted by various factions during the decade of chaos known as the Time of Troubles. The southwest range of the walls was anchored by the massive Kolomna, or Marinskaya, Tower.


Within the kremlin walls is the Brusensky Monastery, with its distinctive mid 16th-century Church of the Dormition of the Virgin. A few paces beyond, along an attractive pedestrian street, stands Kolomna’s main cathedral, also dedicated to the Dormition. Rebuilt between 1672-1682, its structure follows the traditional design of large Russian churches, with six columns supporting the interior space and five onion domes above. The interior has been well preserved, with a late baroque iconostasis from the 1770s and an impressive set of wall paintings in a late academic style executed in oil during the 1880s and based on an earlier set from 1804. Adjacent to the cathedral is a massive bell tower, built in 1692. Across from the Dormition Cathedral are the walls and bell tower of the New Golutvin Convent , with its brightly painted Church of the Trinity (1705).

These monastic ensembles inside the Kolomna Kremlin are complemented by two others on the outskirts of the town, both apparently established by Dmitry Donskoi in the 1380s. The Epiphany-Golutvin Monastery, known after 1800 as the Old Golutvin Monastery, is located to the south of Kolomna near the confluence of the Moscow and Oka Rivers. The most colorful feature of the Old Golutvin Monastery is its wall towers, architectural fantasies built of red brick with limestone details. Across the Moscow River and to the north of the Kolomna kremlin is the attractive Bobrenev-Nativity Monastery. All of Kolomna’s monasteries have been enlivened by a church-sponsored restoration campaign has greatly enhanced the town’s visual appeal.


Kolomna also has numerous parish churches. The most picturesque of these is the Church of the Resurrection ''na Posade,'' also known as the Church of Saint Nicholas Posadsky, which was originally built in 1716, then substantially modified in the 1790s before being restored to its earlier form in the 1970s. This distinctive structure, with its decorative gables, represents an echo of ornamented church architecture in Moscow during the 17th century. Nearby is the delightful Museum of Pastila, an apple confectionary for which Kolomna is widely known.


Kolomna rivals Torzhok with the number of its elegant neoclassical churches. The most visible these is the Church of St. John the Divine, located on the town’s main square and originally built in 1733-58. The church gained its imposing neoclassical facades in 1829-1835. Its soaring bell tower (1826-1846) became the center of a trading arcade that enveloped the church structure—an ingenious combination of commercial and religious architecture.


In addition to its churches and bell towers, Kolomna has historic districts with houses from the 19th century. Among the neoclassical houses restored in the town center, the most notable is the Lazhechnikov House, now a museum devoted to one of Russia’s early 19-century novelists, Ivan Lazhechnikov. Also preserved in Kolomna are large numbers of wooden houses, many of them with ornate window frames. Some of these houses near the kremlin are associated with 20th-century writers such as Boris Pilniak and Anna Akhmatova.

During the Soviet period, new forms of housing appeared, particularly for workers at the Kolomna Factory, founded in 1863 and subsequently a major producer of locomotives. Examples of housing projects sponsored by the Kolomna Factory in the 1920s can still be seen on the main thoroughfare, October Revolution Street. However, many workers preferred to live in wooden houses with a small garden plot, and such houses continued to be built throughout the Soviet period.


Contemporary Kolomna’s most notable landmark is popularly called the Ice Palace, a modern arena for ice sports, as well as a community center.  The choice of site, down the hill from the kremlin, was controversial. The architects attempted to mitigate the visual clash by designing the arena with a suspended membrane roof whose low silhouette is nestled at the bottom of the slope. Fortunately, the construction of a bypass highway has relieved the historic center of through traffic on the way to the city of Ryazan. Like many other Russian towns, Kolomna is seeking that essential balance between economic development and historic preservation.