A concert held in Moscow's subway 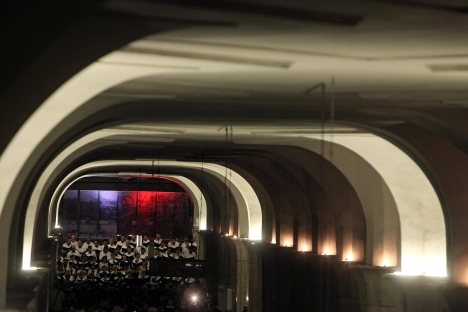 The concert at the Kropotkinskaya metro station in the middle of the night. Source: ITAR-TASS

In second half of May, a very special concert took place deep underground.

Since 2010, every year on the anniversary of the Moscow Metro system in mid-May, there have been live musical performances at the Kropotkinskaya metro station in the middle of the night, after the trains stop running. The lobby serves as the performance hall: chairs are arranged in the center, and there are open trains along the sides where guests can also settle in and enjoy the show.

The first year, there was not enough space for all the people who wanted to attend. The station's capacity is limited, and only 500 people with special invitations were able to go to the concert.

At the first two festive concerts, in 2010 and 2011, The Kremlin Chamber Orchestra under the baton of Misha Rachlevsky performed at the first two festive concerts in 2010 and 2011. This year, however, the decision was made to hold a vocal concert. One of the oldest and best amateur choruses in Russia was chosen, the Academic Grand Chorus of the Russian State University for the Humanities, directed by Boris Tarakanov. For an hour-and-a-half, from 2:30 to 4:00 a.m., the chorus performed along with a Broadway vocal group and international competition winners Irina Sakne and Natalia Kirillova.

This “Night in the Metro” became a continuation of – or, more precisely, an addition to – the “Night at the Museum” project. Held once a year in mid-May, Moscow’s museums stay open late with a showcase special events and performances. Moscow joined the international “Night at the Museum” campaign in 2007.

The Moscow Metro opened on May 15, 1935. Today it forms the backbone of the capital's transportation system. The Moscow Metro currently transports 56 percent of the Muscovites who commute by public transport. Every day, more than 10,000 trips are made along 12 subway lines, with a total length of 305.5 kilometers (190 miles) and 185 stations. The rolling stock consists of more than 5,000 cars, forming over 500 trains.

It made sense to add the “Night in the Metro” to “Night at the Museum” as the Moscow Metro is kind of a museum itself. The extraordinary beauty of the entrance halls has amazed tourists for many years, and residents of the capital never cease to admire them, even when they are rushing to work. The acoustics in many of the stations are also amazingly good.

Despite the late hour, the audience in the improvised concert hall did not fall asleep, but listened attentively. Sometimes they sang along and swayed with the music. The performers said that the audience was very receptive and that they felt a connection with the crowd.

Most of the songs were familiar to all. Arias, folk songs, Cossack songs, church songs, old songs in new arrangements, movie music, works by singer-songwriters and many others rang out into the night.

The audience enjoyed the famous Cossack songs “It's Not Evening Yet” and “Spring Shall Come, but Not for Me.” At one point, it seemed that performers and audience alike had shifted back into the middle of the 20th century, when during World War II metro stations were also filled with song to raise the spirits of the population. During the 2012 concert, the famous wartime song “Dark Night” (1943) was solemnly performed.

Especially touching was the song “I'm Walking the Streets of Moscow,” which is associated with the image of the young actor Nikita Mikhalkov, who sang it in the Metro in the film of the same name. And the no-less-famous “Kalinka” sounded unusual, performed by the Broadway quartet with the addition of a beatbox and motifs from Michael Jackson's song “Billy Jean.” Operatic works also had their opportunity, such as a famous aria from “Tosca.” What was striking was not only the vocals but also the linguistic range of the performers. There were Russian songs, Italian songs (“`O sole mio”), gypsy songs (“My Darling”), as well as English (“Dream a Little Dream”), Hebrew, German, and Arabic songs (“Christ Is Risen”).