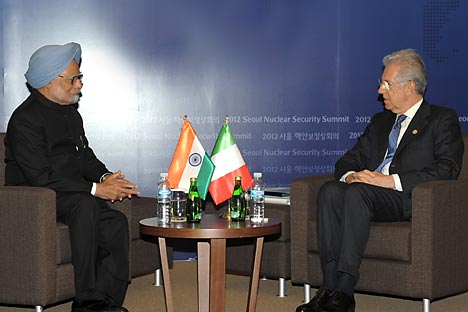 It is only through dialogue and deliberation the standoff between India and Italy over the Italian ship Enrica Lexie can be resolved.

That Italy recalled its Ambassador to India for ‘consultations’ on 18 May 2012 in display of ‘strong displeasure,’ which may also lead to establishment of ‘dangerous precedents’ (words of Italian Prime Minister Mario Minto) in international relations, appeared to reflect changing dynamics in the evolving post-cold war era. It would be hardly imaginable that the standoff between India and Italy over the Italian ship Enrica Lexie could have taken such a course for a period of three months, without any signs of dissipation despite hectic diplomatic parleys and subtle coercion. Without going into merits and demerits of the case, it can be safely assumed that India has apparently taken a strong approach on international issues particularly concerning its national interest. Such an approach was hardly possible in cold war and initial post-cold war days.

There are many instances in the past in which Indian leadership had to bow before the international pressure despite its concerns. For instance, while conducting the nuclear tests in 1974 under the code name Smiling Buddha, it remained reticent to declare itself as a nuclear state and rather declared the tests as peaceful nuclear explosions. Then India’s Prime Minister Indira Gandhi was afraid of international opprobrium over the tests, and she was loath to risk further international isolation aftermath of the crisis in India’s east and creation of Bangladesh. But, her hopes vanished as international sanctions poured in and the country had to undergo severe strain despite the peaceful nature of the explosions. Another instance is the issue of balance of payment of crisis in early 1990s, when Indian government was unable to pay interests on loans and had to transfer gold. But the India of the 21st century despite its numerous problems at home and abroad has raised its stakes in international politics, and been determined to play an increasingly assertive role in the global arena.

Hence, when the differences between India and Italy on the issue of killing of two Indian fishermen by two Italian marines guarding the ship Enrica Lexie galore, and Italian diplomats particularly the Deputy Foreign Minister Staffan de Mistura made whirlwind tours to India to release the Italian marines, and Italian Prime Minister called his Indian counterpart Manmohan Singh and used what sections of Indian media viewed intimidating and threatening, these developments actually contributed to further complicating the issue rather than resolving it. The main difference in arguments of respective countries is: while Italy argues that the two Indian fishermen were killed (on 15 February 2012) by Italian marines in international waters hence the case should be handled in Italian courts, India on the other hand argues that the incident happened in Indian waters hence the marines are subject to Indian laws. The marines were arrested by Indian state of Kerala police four days after the incident and since then they are lodged in Thiruvananthapuram central jail. But, it appears that not mere differences in stand points, but also a difference in approaches to handle the issue has further complicated the matter. As I had argued in one of my interviews to one of Italian websites that it is only through dialogue and deliberation the issue can be resolved. Any sabre rattling or any intimation howsoever subtle will further complicate the matter.

It appears that a lot of efforts have already gone particularly from the Italian side to secure the release of the marines. Staffan de Mistura visited India thrice for this purpose, the Italian Foreign Minister apologised to the families of the victims, and the Italian Prime Minister called his Indian counterpart thrice. Italian government has also given assistance to the families of the victims, as a result of which the families of the victims have withdrawn their cases against the marines. However, the case initiated by the state still continues. The contrasting perceptions on the issue make the matter worse. While Italy perceives that it has already done a lot to secure the release of its citizens, India perceives it as a matter which must be settled through the Indian court of law. On 19 May 2012 the District and Sessions Judge rejected the bail plea of the marines. Italy too had called Indian Ambassador at Rome to its foreign office to express concerns over framing of murder charged against the naval guards.

In the coming days it will be interesting to see how the issue impacts the bilateral relations. For sure, the diplomatic pressure on India will increase to settle the issue on a faster pace. While Italian Prime Minister Mario Monti insisted that the Indian arrest of its citizens will set a dangerous precedent in international law, the Indian Prime Minister hoped that India wants to ‘avoid tensions between India and Italy.’ Monti said, “Any attitude from the Indian side that is not fully in line with international law...risks creating a dangerous precedent for international peacekeeping and anti-piracy missions.” De Mistura said, “We are sending a strong signal (by recalling the Ambassador) to avoid damaging our relationship.” It will not be surprising to see Italy using its clout at NATO (NATO summit took place on 22 May in Chicago) to further build pressure on India for the release of its citizens. However, India appears non-pliable to such pressures at present stage. Rather, the Indian media reported India’s nonchalant attitude to any such pressures. An official of Indian foreign ministry stated, “It does not bother us, but he (de Mistura) needs to understand that it is not a U.N. job in Iraq or Afghanistan, where hands-on diplomacy might help.” He further stated, “It does not work here like that, he needs to understand we are slow, things move through a glacial process, but that is how it is, diplomatic pressure won’t work.”

The best bet will be to resolve the issue through dialogue and deliberation. Gone are the days of the old when intimidation as a foreign policy tool to achieve goals was celebrated. Particularly in the emerging world order where barriers between old and new are crumbling, the dominant and the subordinate are vanishing, and where communication and collaboration have become the basic principle of conflict resolution, India and Italy can do well to resolve the crisis through dialogue and deliberation.