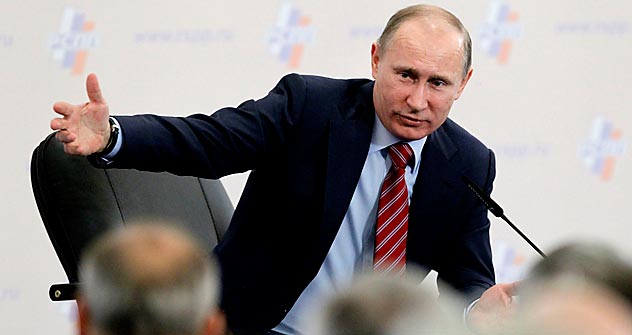 Russians are in favour of strong democratic institutions, reports a US survey, but given the state of the world economy they’d rather be China than Greece.

In what is a clear indication of the growing maturity of democracy in Russia, a new poll by the non-partisan Pew Research Center says an overwhelming majority of Russians like Vladimir Putin but they also approve of political protests, which have been mostly targeted at the Russian leader.

“Following a winter of discontent Russians express an increased appetite for political freedom, and at the same time strongly endorse Vladimir Putin,” says the poll by the Washington, DC-based fact tank.

The poll by Pew’s Global Attitudes Project, which conducted face to face interviews with 1000 Russians between March 19 and April 4, 2012, shows that while 72 percent of Russians voice a favourable opinion of Putin, a solid majority (64 percent) see attending protests as an opportunity to speak out about how the government is run, and more than half (56 percent) approve of the mass demonstrations that followed the December 2011 parliamentary vote.

It’s not merely those steely blue eyes that have hypnotised Russians. According to the survey, a majority of Russians continue to feel that relying on a leader with a strong hand in order to solve problems is more important than relying on a democratic form of government (57 percent vs 32 percent). In addition, strong majorities say it is very important to live in a country where there is law and order and economic prosperity. In fact, 75 percent say they would choose a strong economy over a good democracy – any day.

Putin, therefore, is on firm ground. His base is broad, although he is more popular among women, Russians aged 30-49 and those with less than a college education. It also means he has plenty of work to do to win over younger Russians, who are increasingly vocal and impatient.

Overall, opinion of the newly elected president is more influenced by views of the economy and perceived social mobility, says the survey. Predictably, people who say the economy is good and feel they are better off than their parents are more likely to have a positive view of Putin. On the other hand, those who say an uncensored media is very important are less likely to have a favorable opinion of Russia’s long-time leader.

Putin’s wingman, Dmitri Medvedev, who has stepped into the role of prime minister, is also widely popular, with 67 percent giving him the thumbs up. Their joint high ratings indicate that the Putin-Medvedev power switch – which has been panned by the Western media – isn’t viewed as manipulative by the Russian voter. This is despite Putin’s recent revelation that he and his deputy had planned it all along.

The Tandem vs the rest

In the foreseeable future, few political rivals have the capacity to upstage the Tandem. For starters, if there was any doubt that the Communist Party was on life support, it can be quashed now – the party’s head Gennady Zyuganov is viewed negatively by 52 percent of Russians.

There is no space for brash ultra-nationalism either – Liberal Democratic Party leader Vladimir Zhirinovsky is viewed unfavorably by 66 52 percent. And independent presidential candidate and billionaire Mikhail Prokhorov despite all his style gets the thumbs down from 48 percent of respondents.

With the state of the opposition being such, Putin and Medvedev won’t be needing to make any hard tackles.

State of the nation: Looking up

Satisfaction with Russia’s direction is at its highest level since 2008, says the survey. In fact, 51 percent expect their economic situation to improve over the coming year, just over a third expect the situation to stay the same, and only 9 percent feel things will get worse for them.

Asked how their financial situation compares with five years ago, 32 percent say they and their families are better off today, while 36 percent say their situation has not changed, and 29 percent report being worse off. The mood of the public is much improved from a year ago when 60 percent were not satisfied with the country’s direction.

However, worries persist. While more today (46 percent) than at any point since 2008 say things are going well, a majority (64 percent) continues to describe the economy as bad, says Pew.

Russians are generally seen as moping over their lost empire. This is yet another myth. Sure, Putin has unequivocally said the dissolution of the Soviet Union was the greatest tragedy of the 20th century, but that’s Putin’s view. Extrapolating his views on the Russian people is being overly simplistic. For, the average person is more nationalist that expansionist.

The survey shows that only 44 percent (vs 47 percent in 2009) want an empire, compared with 31 percent who disagree and a quarter who do not have a definite opinion. In fact, Russians who admire Putin are not especially adamant about their country’s imperial claims. Among those with a favorable opinion of Putin, 45 percent think it’s natural for their country to have an empire, compared with 43 percent among those who have a negative opinion of the Russian president.

Russians just want more respect from other countries. Nearly three-in-four Russians (73 percent) say their country should be more respected around the world; only 16% believe that internationally Russia is as respected as it should be. The sense that Russia deserves greater respect is fairly constant across age, education and income groups.

More than half of Russians (55 percent) think people in other countries generally dislike Russia; this is up from 47 percent in 2010.

With Central Asian Muslims – mostly seeking seasonal work but many wanting permanent residency – pouring into Moscow and St Petersburg, ethnic chauvinism is on the rise. Roughly half of Russians (53 percent) say their homeland should be for Russians only. The public voiced a similar degree of narrow-mindedness in 2009, when 54 percent said “Russia should be for Russians”.

In contrast, when the Soviet Union was in its last throes in 1991, 69 percent disagreed and only 26 percent agreed with the notion that Russia should be exclusively for Russians.

Perhaps the most noteworthy fact that has sprung from the survey is that growing numbers of Russians value civic freedoms and institutions, although relatively few see these as a reality in their country. Russians also place the greatest value on a judiciary that treats all citizens equally (71 percent) – this can be construed as a vote against corruption, which has become a key issue with younger voters.

“Moreover, the percentage rating religious freedom, honest elections, free media, being able to openly criticise the government, and a civilian-controlled military as very important has increased notably since 2009, and by double digits over the last decade,” reports the survey.

A decade ago it was popular to pronounce that Russia was in a coma; that it would take decades to establish a post-Soviet system. However, things have taken on a momentum that seems irresistible. Compared with the discontent that’s brewing next door in Europe or across the ocean in the United States, Russia’s problems, although huge, aren’t insurmountable. Russians, you see, aren’t fighting for bread like in those places.

The fallout of unbridled democracy and carnivorous capitalism in many parts of the world is there for all Russians to see. In this backdrop, holding back on democracy and pushing for better living standards is making ample sense. And that’s exactly what Pew reveals Russians are doing.