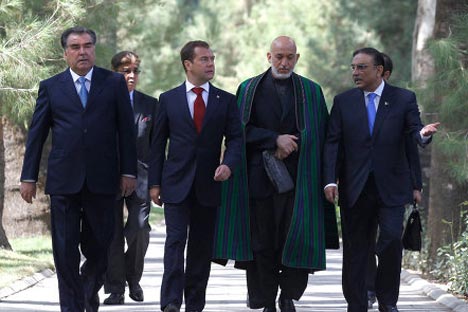 A lot of strategic underbush needs to be cleared before the TAPI can make real headway. It is hard to spot many outside players who can hope to reconcile the contradictions and find acceptance with all the 4 participating countries.

India’s first preference would be, arguably, that the US companies handle the project on a “build-operate” basis – in short, a long-term US involvement in the project as a virtual “guarantor”. But as things stand, this may turn out to be wishful thinking. The US-Pakistan standoff complicates the prospects of US companies. The latest scuffle between Islamabad and Washington over the “CIA doctor” who collected Osama bin Laden’s DNA testifies to the mountain heap of bad blood that has accumulated in the security establishments of the two countries during the war on terror.

Each side is bristling with indignation or injured pride or sense of humiliation – or a combination of all these – and is straining to settle scores with the other side. When the security establishments lock horns – especially for the US and Pakistan with the long history of deep and extensive partnership between the Central Intelligence Agency and the Inter-Services Intelligence – it is difficult to resolve the entanglement. Put simply, it takes time before tempers cool down. Therefore, it is inconceivable that in the present climate of suspicions harbored by Pakistan with regard to the US intentions in the region, Islamabad will feel at ease with the US “technicians” crawling over the highly sensitive Pakistan-Afghan border region through which the pipeline is expected to pass. On the other hand, it is precisely with the intent of pinning Pakistan down to a US-led matrix of regional security cooperation that Washington would like to be in the driving seat of the TAPI.

However, all this is assuming that the India-Pakistan relationship has become smooth as silk, which is of course far from the case. True, the climate of the relationship has markedly improved in the past year or two, but the equation remains fragile. In fact, the positive trend of the relationship might have suffered a minor setback just this weekend with Pakistan holding back at the last minute on concluding an agreement that would liberalize the visa regime with India although the negotiations have been successfully completed.

Islamabad’s grouse seems to be that India hasn’t been substantially reciprocating its goodwill gestures, including some major initiatives such as granting “Most-Favored-Nation” status to trade with India. Pakistan feels that there are “doable” issues in the basket of India-Pakistan differences (such as the demilitarization of the Siachen region in Kashmir or the resolution of the Sir Creek maritime boundary dispute), which India is still keeping deliberately in the backburner from resolving on one pretext or the other, while extracting repeated “concessions” from Pakistan. The weekend’s setback on the visa pact could be a signal from Islamabad to the Indian establishment that there is nothing like a free lunch. Pakistan has been pressing for a prime ministerial visit from India but New Delhi has been dithering.

In the short term, some astute diplomacy is needed to ensure that India-Pakistan relationship doesn’t relapse into a bumpy period. Keeping such a flawed relationship on hold is never easy. This is particularly so today when the governments in Islamabad and New Delhi are both slated to seek fresh mandates through the coming 2013-2014 period and no major initiatives in the relationship seems possible for the next year or two.

Besides, apart from the tempo of the bilateral ties with India, Pakistan is bound to be wary of the US-Indian bonhomie over the TAPI. For this reason alone, the policymakers in Islamabad may still prefer the Iran-Pakistan-India [IPI] pipeline to the TAPI. Indeed, the IPI’s single biggest virtue in the Pakistani eyes is that it shuts the door on the US from entering the energy politics of South Asia. Also, the IPI is distinctly more economical and easily feasible as a project to implement. Although the cost of TAPI was originally estimated in 2008 as $7.6 billion, this is today likely to be in the region of $12 billion. (It remains to be seen whether any major energy company will be interested in financing the project, what with all the security risks of the precarious Afghan situation.)

Evidently, a lot of strategic underbush needs to be cleared before the TAPI can make real headway. The challenge is formidable; it is hard to spot many outside players who can hope to reconcile the contradictions and find acceptance with all the 4 participating countries in the TAPI.

Builder with a brave heart

This is where, perhaps, Russia’s opportunity lies. Indeed, Russia enjoys friendly relations with all the TAPI countries. Pakistan would have been the weakest link, but in the recent years, Russia-Pakistan relations have had a remarkable makeover. The quadrilateral Russia-Tajikistan-Afghanistan-Pakistan [RTAP] forum at its summit in September last year specifically endorsed Russian participation in the TAPI. In a signed statement, the heads of state of the 4 countries pledged, “The sides highly assess Russia’s interest in participating in the TAPI project.” In November last year, soon after the RTAP endorsement, Russian deputy energy minister Yuri Sentyurin explicitly stated, “We [Russia] would like to get a stake in a company, which will be involved in the implementation of the project. Russian companies are also ready to be contractors of the TAPI project.”

So, the big question is whether all the hype on the part of the US is a deliberate put-on act actually aimed at “usurping” the TAPI as a New Silk Road project suffused with the undercurrents of Washington’s regional (and global) rivalries. What the US is doing is to place itself in a tactical position to exploit the TAPI, which provides a rare opportunity to work its way into Central Asia in a big way, where it is otherwise meeting with stiff resistance from both Russia and China. The beauty of the US strategy is that it is not putting any money on the table and is avoiding risk-taking, but finding itself all the same in the happy position of claiming the TAPI to showcase the New Silk Road. The motivation is heavily geopolitical – working in tandem with India to get a hold over Pakistan; creating another justification for the US and NATO’s long-term presence in Afghanistan; inducing the Central Asian states to move toward greater globalization.

From the regional point of view, a far simpler – and preferable – way will be to conceptualize the TAPI as a genuine “peace pipeline” involving the countries of the regions of Central and South Asia. No doubt, the project holds the potential to contribute significantly to the stabilization of Afghanistan in terms of employment generation and other secondary and tertiary level spin-off for the Afghan economy. The TAPI is expected to bring $430 million in revenue as transit fee to Afghanistan. The entire region has high stakes in Afghanistan’s stability and development.

However, the US is unlikely to allow the TAPI to go ahead if it finds itself unable to leverage the project to its geopolitical advantage. The fact of the matter is that there are so many contradictions in the regional situation, which the US could easily accentuate to block the project if it so wishes. (The US’ opposition to Afghanistan accepting “observer” status within the Shanghai Cooperation Organization is a telling example of this dog-in-the-manger attitude.) All indications are that Washington is determined to push ahead with the New Silk Road in the post-2014 scenario in Afghanistan, and the TAPI is integral to this endeavor.

The next step for the TAPI – once the Gas Sales and Purchase Agreement between Afghanistan and Turkmenistan is also finalized – will be for the four participating countries to attract commercial partners to build, finance and operate the pipeline. As things stand, it needs a brave heart to step in to assume the challenge of building a gas route through some of the world’s most dangerous territories. The planned route winds through 735 kilometers of southern and western Afghanistan.

Experts have tabulated that something like 72 percent of all Taliban violence takes place precisely in the swathe of Afghan territory that the TAPI pipeline would traverse. Now that the NATO’s “transition” of security to the Afghan forces has become “irreversible” (as agreed at the NATO summit in Chicago), it all depends on Karzai’s capacity to deliver on the security of the project. Which brings one back to the “understanding” he claims to have reached with the Taliban not act as a spoiler.

In sum, although the TAPI has taken a big step forward in its 10-year trek, many obstacles remain for the project to move on to the implementation stage. The bridge leading to the completion of the project by 2016, as the Indian officials seem to anticipate, still seems a bridge too far.