Without Putin, the show goes on 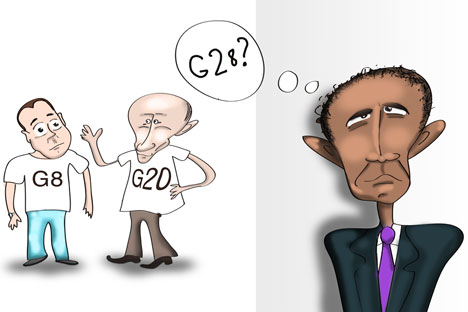 Given the proliferation of modern telecommunication technologies, it would be reasonable to expect that world leaders would be less inclined to travel to remote places for live meetings with their peers, and yet the intensity of international summitry shows no signs of abating. Apparently the heads of states and governments still appreciate the value of face-to-face interactions, a chance to hang out with an ally or look into the soul of an adversary.

Consider, for example, the summit of the Group of Eight (G8), an annual forum of leaders of eight large economies: Canada, France, Germany, Italy, Japan, Russia, the United Kingdom, and the United States. Just a couple of years ago, many experts predicted that the G8 would soon be overshadowed by the more inclusive and representative summit of Group of 20 (G20), a gathering of 20 of the world’s largest economies. Yet, the G8 show still goes on uninterrupted, each meeting gathering attracting abundant media attention –  along with hordes of professional protesters from around the globe who descend on summit sites to express their hatred for the “ruling elites” and transnational corporations.

Although the major point of G8 summits is to provide a venue for one-on-one or group cuddling, each summit has a formal agenda. The agenda of this year’s event – hosted by the U.S. President Barack Obama at Camp David, Maryland – included two major topics: the financial crisis in Europe and global security, in particular, the situation around Afghanistan and Syria.

In all likelihood, the 2012 G8 summit, like its many predecessors, would have gone down the history unmarked by anything memorable if not for an unprecedented breach of a non-official protocol: one of the heads of states represented at the summit, Russian President Vladimir Putin, refused to attend the meeting. In a phone conversation with President Obama, Putin attributed this decision to the need to finalize the structure and composition of his new government.

Given that Putin had two months between being elected president and the G8 meeting to deal with the issue of the cabinet, many analysts questioned Putin’s explanation and instead interpreted his absence at the summit as an intentional snub of his American counterpart. Naturally, there was no shortage of alternative explanations for Putin’s behavior. Conspiracy theories aside, a few factors may have influenced the Russian president’s thinking. First, Putin didn’t want his inaugural foreign trip to bring him to the United States, a country he has often criticized for meddling in Russia’s domestic affairs. Second, Putin naturally tried to avoid the intense media attention that his appearance at the summit would have elicited – with inevitable questions from the press about the protest actions that accompanied his May 7 inauguration. Third, Putin sent a clear message that Russia today doesn’t value its G8 membership as much as it did in the past; these days, Moscow openly favors the G20 format. Fourth, in preparing for a long-anticipated meeting with Obama, Putin wanted to deprive his American counterpart of the home-field advantage; Putin will feel much more comfortable meeting Obama in “neutral” Mexico during the mid-June G20 summit. Finally, Putin made it obvious that he was not going to invest much effort into his relationship with Obama until after the U.S. elections in November.

The majority of Russian politicians supported Putin’s decision to skip the summit. For example, Alexei Pushkov, head of the foreign affairs committee of the State Duma, argued that as pragmatic as he was, Putin had simply no reason to go to Camp David because no “breakthrough” decisions were expected to be made there.

This is a slippery slope. True, due to their “informal” nature, G8 summits are not natural occasions for announcing bold international initiatives. Nevertheless, Pushkov would be hard pressed to name at least one “breakthrough” G8 summit among those Putin attended during his two prior presidential terms, including the one he personally hosted in St. Petersburg in 2006. Has it occurred to Pushkov that world leaders may conclude that no “breakthrough” developments will come out of the 2014 G8 summit scheduled to take place in Russia at Skolkovo and decide to skip it? Or hold a G7 summit elsewhere?

At Camp David, Russia was represented by Prime Minister Dmitry Medvedev, confirming earlier speculations that during Putin’s third presidency, Medvedev will continue to play an active role in foreign affairs, including attending high-profile international events. Yet, Medvedev’s very first mission of honor was spoiled by the way Putin introduced it. For the few weeks before the trip, Medvedev had been actively working on the formation of the future Cabinet. Then, Putin made it obvious that it was him – and not Medvedev – who had the final word on the structure and composition of Medvedev’s own government. Suddenly, the prime minister looked like a child who has been sent to play in the yard while his parents checked his homework.

Hopefully, in the future, Putin won’t abuse Medvedev’s willingness to serve as a messenger. Doing so will leave Russia underrepresented at the world forums, which may eventually hurt its national interests.