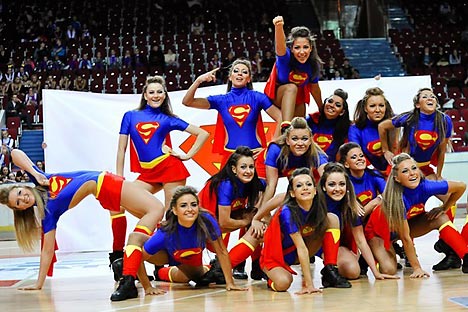 Cheerleading may be a relatively new sport in Russia, but a Russian team just won the world cheer dance championship.

Cheerleading as a sport is relatively new to Russia, and as a result few people know that a Russian team recently won the world cheer dance championship.

Despite the fact that cheerleading developed in connection with American football, this sport has become most popular not as a support group, but as a kind of acrobatic performance. Cheerleading is gradually consolidating its status as a separate sport, and its fans no longer consider cheerleaders merely an addition to the sidelines.

The Russian Cheerleading Federation has 43 regional divisions, stretching from Kaliningrad to Vladivostok. Since 2007, cheerleading has been classified as a separate sport, and each region in the federation trains a team to take part in the Russian championships. The winner of this competition then represents the country at the European and World championships.

Competing at that level requires a huge amount of preparation. “As of 1999, people in Russia thought of cheerleading as ‘girls holding pom poms.’ In the very early stages, we began to work with international organizations, including the American Cheerleading Association. We brought in trainers to work with us during extended visits, without even knowing the competition rules. So we simply watched and learned,” said Valentina Novikova, Vice-President of the Russian Cheerleading Federation.

Today, cheerleading in Russia is developing on the European model, in which a country has a single cheerleading federation that regulates all aspects of the sport, from competitions to costumes. In contrast, in the United States, several commercial organizations work to organize competitions.

One of the reasons cheerleading has become so popular in Russia is the approach taken to choosing and training the young athletes. From looking at American cheerleading films, it seems that only slim girls can become cheerleaders. In reality, that is not the case. Many prize-winning Russian teams place a high priority on having a strong foundation for building complicated acrobatic formations. Thus, cheerleading is first and foremost a team sport and a good way to deal with the complexes experienced in adolescence. It doesn’t matter if a girl is slim or heavy; everyone can find a place on the team.

Another cheerleading stereotype is that it is a sport only for girls, but young men are also welcome on cheer squads. Currently there are more mixed teams than all-girl teams in the regions.

Cheerleading requires serious athletic training, so the majority of those who participate in the sport are already athletes. Radio Zenith journalist Anna Komogorova took up cheerleading after participating in dance competitions while she was a college student.  After graduation, she realized that she missed dancing, so she goes to cheerleading practice three times a week after work. “

This is neither a professional career nor a hobby for me,” said Komogorova. “I don’t get paid for practice time or competitive performances. But cheerleading is not just a hobby, either, because I spend around nine hours a week at practice. I would say that for me it’s a way of life. It’s great to be able to take your mind off work, compete in tournaments, and have a completely different identity. Cheerleading means doing a huge amount of work on yourself, to stay in shape,” Komogorova said.

In 2013, the Russian Cheerleading Federation plans to give an exhibition program at the Student Games in Kazan. Cheerleading fans hope Olympics officials will be inspired by what they see and will include cheerleading as an Olympic sport at some point. In the meantime, however, this sport is so popular that it doesn’t need to advertise or run recruitment campaigns.

“The only problem in cheerleading today is that it’s seen as propaganda for the American way of life,” said Valentina Novikova. “I think this is not true. Sports have no national or geographic borders. And cheerleading is a sport.”

There are several types of cheerleading:

Cheer has elements of gymnastics and acrobatics. It often involves the formation of pyramids and changing dance configurations, done to chants;

Stunt work is the construction of human pyramids

An individual cheerleader is the head of a team and performs solo numbers;