Importance of India joining as a full member of the SCO 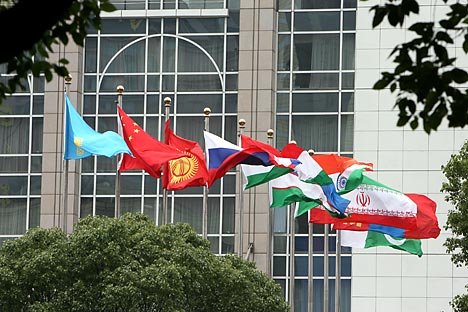 New Delhi has sought a greater role in the SCO for three years but India is unlikely to become a full member into the regional security group at the SCO's 12th summit of the heads of state in Beijing, believes expert Dadan Upadhyay.

India is unlikely to be inducted as a full member into the regional security group, the Shanghai Cooperation Organization (SCO), at its 12th summit of the heads of state in Chinese capital Beijing on June 6-7.

New Delhi has already been knocking at the grouping’s door for the last three years as it sought a greater role in the SCO, in the light of fast changing geo-political situation in the region, in particular, in view of the planned US withdrawal from Afghanistan by the end of 2014. The possibility of an increase in the number of prospective partners of the SCO in the near future, India’s admission into the organization has rather gained an imperative importance.

However, the statement made by Chinese Vice-Foreign Minister Cheng Guoping on Wednesday in Beijing ruled out any decision on admitting India along with other observer members in the SCO at the summit in Beijing, stressing that there was no fixed timeframe for the expansion of the membership.

“The relevant countries should work hard towards political, legal and technical preparations for the full membership,” Cheng told media persons.

Currently, India holds an observer status in the organization, while it awaits the final decision on its application for the full membership of the SCO.

Joining the SCO as a full member will enable India to be a part of one of the world’s most powerful regional groups and increase the level of multilateral economic cooperation and the flow of trade and energy resources. It will also align India’s national security interests with that of region’s countries, especially of Russia and China.

“Indian interests in Central Asia fully coincide with the interests of the SCO member-states, and India’s goals meet the organization’s objectives,” according to Dr Alexander Lukin, Director of the Center for East Asian and Shanghai Cooperation Organization Studies at the Moscow State Institute of International Relations (MGIMO).

India believes when it becomes a full member of the organization, it can involve itself with a greater participation in the six-member state security grouping’s counter-terrorist manoeuvres with massive air-and-ground exercises against armed radical Islamic militant groups in the region. Full membership will also enable New Delhi to closely interact with the SCO’s Regional Counter-Terrorism Structure (RCTS) based in the Uzbekistan capital Tashkent and other regular meetings of the organizations including ministerial level trade and economic summits.

Created in Shanghai in 2001, the SCO includes Russia, China and four former Soviet Central Asian Republics of Kazakhstan, Kyrgyzstan, Uzbekistan and Tajikistan as full members. India, Pakistan, Iran and Mongolia have observer status while Turkmenistan and Afghanistan participate in the meetings of organization as guest countries and Belarus and Sri Lanka have the status of dialogue partners.

At present, while India, Pakistan and Mongolia are eligible for full membership, Iran is not because it is under a string of UN sanctions in relation to its controversial nuclear programmes.

India joined the SCO as an observer member at the 5th summit in July 2005 in Kazakhstan capital Astana. With its historic links to “Silk Road” and economic growth and strong IT sector, India is undoubtedly poised today to immensely contribute to the economic prosperity of region. Indian Prime Minister Manmohan Singh for the first time took part in the SCO summit in the Russian city of Yekaterinburg in 2009, signaling the increasing importance of the SCO at regional as well as global level.

Ahead of the heads of state summit in Beijing, the SCO Foreign Ministers at their meeting in Beijing on May 11, had reiterated that the grouping should create a bigger role for observer members and dialogue partners within the SCO framework.

Russian Foreign Minister Sergei Lavrov called on the meeting to speed up the process of admitting India and Pakistan as full members into the SCO, warning that any further delay in final decision on this issue would be “counterproductive.”

This is not for the first time that Russia as a main supporter of India’s full membership in the organization, raised the issue of inducting New Delhi into the SCO as a full member. It has always  championed the admission of India into the organization to balance Beijing’s dominance and reinforce the SCO’s political clout.

Most recently, in April, after the triangular meeting of the Foreign Ministers of Russia, India, China (RIC) in Moscow, Lavrov said that India with its billion-strong population plays a very important role in the Shanghai regional group and Russia backed India’s full membership in the organization. He also expressed the hope that after the finalization of the legal, organizational and financial aspects of admitting new members in a “short time,” a decision to admit India and Pakistan in the SCO would be taken.

According to some Indian political observers, Lavrov’s warning that delay in final decision on granting India full membership would be “counterproductive” indicated some “resistance” within the SCO members to admit new countries in the organization as full members.

Earlier, media reports said some smaller member-states, including Uzbekistan, Kyrgyzstan and Tajikistan, were opposed to expanding the SCO as they were apprehensive of  new members to the effect that they may inject their own issues and  disputes  into the organization and divert the attention of grouping from finding a solution to their  own issues.

While Russia and Kazakhstan have been strongly supportive to include India as a full member in the organization, China is reported to have long resisted SCO expansion, insisting more on “procedures” in order to admit new members. But the planned US withdrawal from Afghanistan and fear of spill-over of instability to the neighboring countries in the region, have ultimately convinced  the SCO member-states to review its stand on admitting new members.

According to Russian media reports, at the SCO summit in Beijing, a whole range of programme documents is on the cards to be signed, including the Declaration of heads of SCO state on creating the region of enduring peace and common prosperity, and granting Afghanistan an observer status in the organization, which applied for the status in April, 2011.

India believes besides Afghanistan, an expanded SCO could encourage Pakistan to eliminate terrorist groups on its territory which may also promote economic cooperation among the countries in the region. With its greater involvement with the SCO, Afghanistan can become the “geostrategic bridge” between Central and South Asia as well as a trade and transit hub.

India also feels it will immediately gain economically by becoming a part of the trans-Asian infrastructure linkages and energy delivery systems being planned by China, Russia, Tajikistan, Kazakhstan, Kyrgyzstan and Uzbekistan.

With Russia announcing plans for a common Customs Union, India’s trade initiatives could be more fruitful, especially with some other countries expected to join the initiative. Apparently becoming a full member of the SCO will impart greater “visibility” to India in the Eurasian Economic Community.