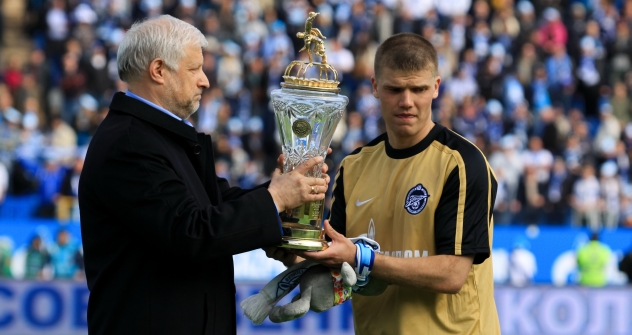 President of the Russian Football Union Sergei Fursenko, left, did his utmost to win the right for Russia to host the 2018 FIFA World Cup. Source: ITAR-TASS

Even before Russia won the right to host the 2018 FIFA World Cup, the country heard that the Russian team would be the 2018 FIFA champion.

Bringing home a victory in the world’s greatest soccer competition was part of Sergei Fursenko’s campaign for the presidency of the Russian Football Union more than two-and-a-half years ago. When Fursenko first declared that Russia would be the 2018 world champion, Russia had just missed out on the 2010 World Cup, and no one else even ran for the office. Despite all of that, Fursenko, a former manager of a Gazprom subsidiary and one-time president of Zenit St. Petersburg ran a full-fledged campaign, brushing off critics’ claims saying, “if you do not strive for the impossible, you will fail to reach the possible.”

Fursenko may have been right to make his boasts. Russia has already achieved one success, beating out England, Spain & Portugal and Belgium & the Netherlands to win the right to host the 2018 World Cup.

Government support for sporting events has never been a problem in Russia; there is a strong lobby in the Kremlin and President Vladimir Putin is known for preaching the virtues of a healthy lifestyle. It is commonplace in Russia for professional athletes to be used as role models and, if that weren’t reason enough, Russia would also like to use the tournament to generate positive publicity abroad.

And so, no cost was spared in pursuit of the tournament. Official figures from the Ministry of Sports calculate the investments needed for the World Cup to be $19.8 billion, $7.5 billion of which should go to improving and expanding streets while another $3.7 billion should go into renovating stadiums. FIFA set up a commission to determine the match locations in April, and will reduce the number to 11 from 13 in September. Currently, Moscow, St. Petersburg, Kazan and Sochi are almost certain to host matches.

Moscow’s Luzhniki Stadium hosted the 2008 Champions League final and is considered to be the most likely location for both the opening and final matches of the tournment. The stadium’s maximum capacity is being expanded from 78,000 to 89,000 by lowering the field so that additional rows of seating can be installed. Renovations to the Spartak Moscow and Dynamo stadiums are projected to be completed in 2015 and 2016 respectively. Both projects are being funded by the tournament’s main sponsors, Lukoil and WTB. In St. Petersburg, hometown team Zenit is receiving a brand-new arena that will sit 69,000 spectators and, after numerous delays, should be ready to go in 2014. Construction projects are also underway in Kazan and Sochi. The recently renovated Central Stadium in Yekaterinburg could be augmented with mobile stands for the World Cup. All of the other stadiums are currently in the planning stages.

The 2018 World Cup is but one of many sporting highlights to be held in Russia in the coming years. The World University Games in 2013 will be hosted by Kazan, the Winter Olympic Games and Russia’s first ever Formula 1 race will be held in Sochi in 2014, while the Ice Hockey World Championships will be in Moscow and St. Petersburg in 2016.