What role will Russia play in the space century? 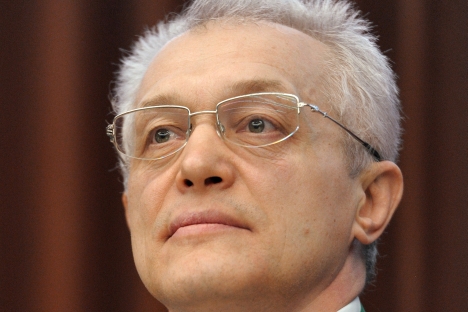 Sergei Zhukov, head of the Space Technology at Skolkovo Innovation Center: "The world economy is becoming more and more dependent on the intensity of space activities." Source: Kommersant

As technology develops and private companies expand into intergalactic travel, vacationing and working in space seems to be less and less far-fetched.

Elena Shipilova of Russia Beyond the Headlines spoke with Sergei Zhukov, head of the Space Technology at Skolkovo Innovation Center about the future of space and the role Russia can play.

Russia Beyond the Headlines: The role of outer space in global politics increased in recent decades, has it not?

Sergei Zhukov: Indeed, the world economy is becoming more and more dependent on the intensity of space activities. The market for space technology production and services is variously estimated at between $300 billion and $400 billion a year. It has several segments, the biggest being satellite communications and telecommunications (over $100 billion), navigation and distance Earth sensing. Russia’s share in these segments is less than one percent. In the production of satellites of various kinds, our share is 7–10 percent. Our share is traditionally high – 33 to 40 percent – in orbiting payloads, but that segment is small, about $3 billion a year.

RBTH: What prevents Russia from increasing its share of the world space market?

S.Z.: On the one hand, state financing of space activities in Russia has more than tripled over the last five years and is still growing. The new space strategy is widely discussed. On the other hand, there is virtually no private sector in the industry, whereas the world trend is toward ever more confident involvement of the private sector in space exploration. Besides, there is international division of labor in high-tech sectors, and Russia should not hesitate to form alliances with leading world producers.

RBTH: Have the Americans gained the lead in world space activities because of the development of the private sector?

S.Z.: The U.S. today is the only country that pursues virtually all types of space activity. And no wonder: if one combines their civilian and military budgets, the sum is sure to exceed the total spending by the rest of the world on space activities. As for development of the private segment, the U.S. policy adheres to a strict division of responsibility: study of the solar system, including planets and asteroids, is the business of the state, whereas developing near-Earth space is the domain of private companies. And you should remember that the giant contractors of the U.S. space agency today, be it Boeing, Lockheed Martin or Orbital, are all private enterprises. They ensure America’s technological lead.

RBTH: What is the situation in the U.S. regarding startups?

S.Z.: The new space companies get government help under the public-private partnership scheme. Space startups are supported by various foundations, such as Small Business Innovation Research. Some small firms have managed to grow into world-class companies over the past decade. One example is Space Exploration Technologies (SpaceX), founded by Elon Musk in 2002. Today, he employs a staff of 1,500 and is developing a manned Falcon spacecraft intended to deliver cargoes to the International Space Station. Another interesting project was launched by Richard Branson, whose Virgin Galactic is developing sub-orbital tourism. The company Bigelow Aerospace, owned by the hotel magnate Robert Bigelow, is going to build a space hotel.

RBTH: Do you believe that some day people will prefer to spend their holidays in orbit rather than on sandy beaches?

S.Z.: The case of Virgin Galactic, which has received payments from several hundred people for a future sub-orbital flight, shows that the space tourism market has a future. People readily splash out for submerging in high-tech diving bells or mini submarines. I am not surprised that many are prepared to pay hundreds of thousands of dollars to experience weightlessness for several minutes and see the Earth from outside. When the technology becomes fairly safe and cheap, such travel could become fashionable. Russia is only planning to enter that market, but we have other promising projects.

S.Z.: The Glonass system was finally put together last year. This is the second navigation system in the world. The first [G.P.S.] was made by the Americans. There are also Europe’s Galileo and China’s Compass, but they are so far only of local significance. The Skolkovo Foundation today supports several navigation-related projects. This is the path towards commercialization of Glonass.

RBTH: Are any domestically made breakthrough products in the pipeline?

S.Z.: That’s a tough question. Russian energy and engine technologies have a good chance, by which I mean rocket engines and space nuclear plants. I do not rule some less spectacular but important technical solutions in the field of small space platforms and elements of on-board service systems. The members of the Skolkovo project are working on such projects.

RBTH: Are there many others who are willing to support private initiatives in Russia apart from the Skolkovo Foundation?

S.Z.: We are not the only ones. Indeed, other development institutions began to support the commercial industry before we did. They include the Russian Venture Company and Rosnano. Vnesheconombank is actively investing in major projects.

RBTH: Are Russian businessmen are lukewarm about the space industry?

S.Z.: Russia has virtually no legislation on commercial space activities. The federal law on space activities was passed in 1993 and has since been amended and supplemented many times but it remains basically a framework law. Private interests simply do not understand what rules to play by and businessmen are afraid to invest in the sector. And there are many restrictions, such as on high-resolution space photographs and on obtaining licences for space activities.

S.Z.: Our strategic goal is to create a site that would attract scientists, engineers, industrialists and entrepreneurs from various countries.

RBTH: Do you think that in the future man will be able to mine minerals on the moon and perhaps on other planets?

S.Z.: So far, this is sci-fi stuff, but I do not rule out that it might happen in a few decades. There is water, manganese and aluminium on the Moon and asteroids that are fit for making fuel and structural elements of spaceships and long-term stations. American business has ambitious plans to develop rare earth elements and deliver them to Earth. I am referring to Peter Diamandis and some of his colleagues, who set up a Planetary Resources Inc. consortium in late April 2012. The world space business in developing rapidly and we shall just have to see what the outcome is.