Who are the Buranovo Grannies? 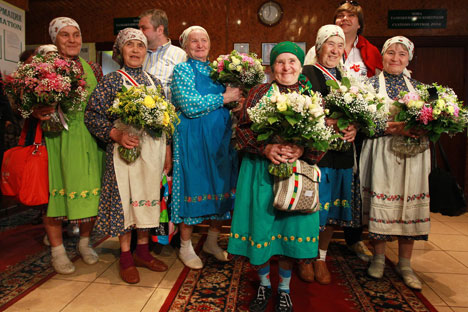 The Buranovo Grannies took second place at the 2012 Eurovision Song Contest in Baku with their hit “Party for Everybody.” But who are the Buranova singers?

“We have always loved singing. When we worked as painters, we would sing so loud that the entire house would hear us!” Baisarova said “They don’t sing like that anymore, I guess.”

Baisarova came to Buranovo with her family in 1976 and worked as a milkmaid for 20 years. She took a long break from singing when her two sons were drafted and sent to serve in Chechnya. When they returned safely, she started singing again.

Baisarova enjoys handiwork. She knits, embroiders and weaves. She always has a ball of yarn and knitting needles with her and she has made colorful socks for the other Grannies to wear during performances.

Begisheva worked all her life as an accountant at the Buranovo state farm. After retiring from the farm, she founded an unofficial history museum at the local House of Culture. “One boy brought an old flatiron and thought we would give him money for it,” said Begisheva. “He was very upset when he learned that we do not pay for the exhibits, but did not take the flatiron back. One man brought a three-kilogram mammoth’s tooth. It has nothing to do with old-time life, but I still put a number on it and show it to every visitor.”

Dorodova worked as a baker at the Buranovo bakery until she got married and moved to the village of Babino. There she worked as a cook and head of a school cafeteria. After her husband died, she returned to Buranovo and worked as a cook in a geologists’ cafeteria until her retirement.

Dorodova is the most staid and taciturn of all the Grannies. She cooks for the entire band on tour.

Koneva graduated from a preschool teacher training college in Sarapul and worked at an orphanage for a few years before returning to her native village. She worked at a kindergarten in Buranova until she retired at the age of 60. In addition to singing in the band, Koneva sews dresses for dolls and has assumed the role of the village elder. She was responsible for preventing a nightclub from opening in town a few years ago.

“I’d rather we build a church, which is more important for the younger generation. We don’t need bars getting our people drunk. Young people should be praying instead,” Koneva said.

Pugacheva was getting ready to enter second grade when World War II erupted. She never resumed her studies and worked all her life at the Buranovo state farm. Pugacheva loves flowers and animals; she and her husband have a cow and breed fowls and pearl hens.

Pugacheva is famous for her pies and cookies, her fabulous sense of humor, smile and flexibility.

Shklyaeva had to leave school after she finished fourth grade to support her brothers and sisters when her mother fell ill and her father was drafted.

After she married, Shklyaeva moved to the Perm Region, where she worked at the Izhevsk Mechanical Plant and as a painter and plasterer at a construction site. She returned to Buranovo after her husband died.

When Pyatchenko completed school, she left for Sarapul to train as a seamstress. Later she went to college became a professional philologist. She moved to Krasnovodsk after she got married, but returned to Buranovo after her divorce.

Pyatchenko lost her right arm in an accident with a buzz saw. While she performs with a prosthesis, she does well with one arm, taking cared of her strawberries, making jam and using a sewing machine. She used to sew dresses for the entire band.

“They offered three options – educator, librarian and director. I chose the last one – I liked the word,” she said.

Her main hobbies, apart from the Buranovo Grannies, include a children’s theater school that she organized at the local House of Culture.