Further thoughts on my speech at Higher School of Economics 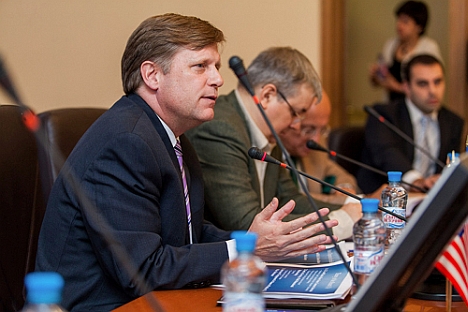 As a proponent of better U.S.-Russian relations, I was surprised by the official reaction to my talk at the Higher School of Economics in Moscow.

The central thesis of my presentation was how much U.S.-Russia officials have accomplished in the last 4 years with the “reset” in our relations. As one of the architects of this policy and as President Obama’s representative here in the Russian Federation, it is natural that I would give a talk applauding the results of the reset. Prime Minister Medvedev said recently in Seoul that the last three years of the U.S.-Russia relationship have been the best period in U.S.-Russia relations in history. We agree, and I am proud of the personal role that I have played in improving the bilateral relationship between our two countries.

The Russian Foreign Ministry on Monday blasted McFaul’s speech delivered to students at the Higher School of Economics in Moscow saying that “his estimates of Russian-U.S. cooperation go far beyond diplomatic etiquette." Russian diplomats were particularly dismayed by McFaul’s statement about the Manas airport in Kyrgyzstan, when the American diplomat told students that Russia had “bribed” the Central Asian state in 2009 to prompt the country to shut down the U.S. military airbase there. He added that his country had also offered a bribe to Kyrgyzstan, but ten times smaller.

The goal of my speech was to applaud how we now cooperate in Central Asia, avoid linking unrelated issues, and are relaxed about claims of internal interference. The point of my digressions into past historical practices was not to “spread blatant falsehoods”, but rather to illustrate precisely how much we have overcome by abandoning these outmoded ways of diplomacy from previous eras. Maybe I shouldn’t have spoken so colorfully and bluntly. On that, I agree and will work harder to speak more diplomatically.

U.S. and Russian officials are now engaged in serious dialogue to stop the horrendous killing in Syria, to prevent Iran from acquiring nuclear weapons capabilities, and to promote trade and investment between our two countries. As I have every day for the last four years, I look forward to working closely with my colleagues at the MFA and elsewhere in the Russian government to return to this real agenda of U.S.-Russia relations.