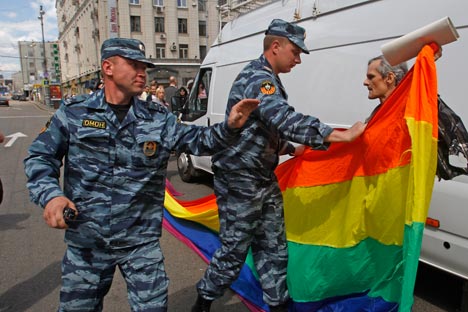 The crackdown of the LGBT rally in Moscow has spurred debates over the sexual minorities' rights in Russia. Source: AP

Less than a week after Russia came in for criticism on the state of human rights in the country from both Amnesty International and the U.S. Department of State, another gay rights protest was broken up in Moscow.

Approximately 40 protesters were detained May 27 during yet another attempt to protest for LGBT rights in Moscow, according to the Russian Ministry of the Interior. The detentions came just three days after Amnesty International's 2011 annual report on the state of human rights worldwide was issued, which included harsh words for Russia. The report read in part, “freedom of assembly had been frequently violated in the context of political, environmental, social and other protests."

Blog: A night at The Human Library

The issue of gay rights was singled out for special attention. "LGBT rights activists continued to face harassment and attacks.  Attempted pride marches and pro-LGBT rights pickets in Moscow and Saint Petersburg were banned and promptly dispersed by police," the report stated.

The LGBT rights situation in Russia was also highlighted in the U.S. Department of State's annual human rights report, issued on May 25. Among other criticism, the U.S. report included the statement that, according to LGBT activists in Russia, "the majority of LGBT persons hide their orientation due to fear of losing their jobs or their homes, as well as the threat of violence."

The official commissioner of human rights in Russia, Vladimir Lukin, believes however that there are few violations of LGBT rights in the country. "This issue is very complex. As Russia's human rights commissioner, I must say that we receive few complaints regarding rights violations of sexual minorities," Lukin said. A new city law in St. Petersburg approved at the beginning of this year, however, questions Lukin’s statements. The law prohibits "promoting sodomy, lesbianism, bisexualism and transsexualism to minors." Gay rights activists say the law could be used to crack down on any public demonstration of homosexuals - from art to gay pride parades.

Lukin, however, does not consider the law a violation of LGBT rights. "I do not think that the publicity of sexual preferences is acceptable. If the Constitutional Court decides that the law goes against the Constitution, then I would be against that law. Any legislation gives rise to criticism, it is healthy," Lukin said.

The Amnesty International report highlighted an increase in civil society movements in Russia after the parliamentary elections in December 2011, noting the importance of "civil and political freedoms" and the decrease in the population's demand for the "stability promised by [Dmitry] Medvedev and [Vladimir] Putin.”

Nevertheless, the organization did not consider these protests an example of progress on human rights in Russia. According to the Amnesty International, the decision of the authorities to allow some street rallies does not excuse continued restrictions on freedom of assembly and the organization reports that many Russian peace demonstrators were detained and arrested.

Likewise, while the report also notes the increasing influence of online media and minor print media outlets which, unlike Russian television, criticize the government, it indicates that opposition journalists continue to face threats, which are very rarely fully investigated by the authorities.

Another problem reported by Amnesty International is the delay in implementation of promised reforms. According to the report, in 2011 no progress was made in the fight against corruption or in the continuation of modernization and the criminal justice system reform. The report also stated: "members of religious minorities faced persecution" and "torture remained widely reported despite superficial police reforms", and also that "the situation in the North Caucasus remained volatile, with serious human rights abuses."

For his part, Lukin did not find the report disheartening. "This is the recognized and complete report on the state of human rights in 190 countries. [Amnesty International] is a qualified organization and its point of view is quite objective. At least, I was satisfied to know that out of all of the countries analyzed, only 21 have the death penalty," Lukin said.