Russia takes “The Road To” Cannes 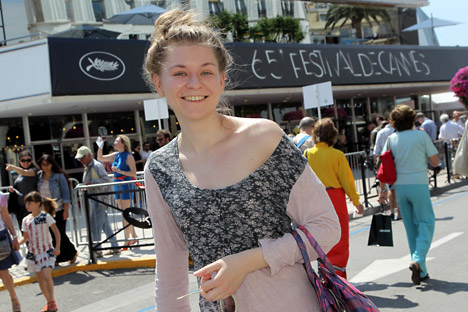 “The Road To,” by Taisia Igumentseva won the top prize in the 15th Cinéfondation Awards for student short films in Cannes. More than 1,700 films were submitted to Cinéfondation this year, and 15 films from 14 different countries were chosen to compete. The winner was chosen by a jury headed by director Jean-Pierre Dardenne, and the top prize carries with it a 15,000 euro award.

Igumentseva graduated last year from the Russian State University of Cinematograph (VGIK), often considered the laboratory of director Alexei Uchitel. Igumentseva’s film is about a young man living in a depressing apartment block in a megalopolis. Igumentseva spoke with Anton Sazonov of Russia Beyond the Headlines about her success and her future plans.

Russia Beyond the Headlines: How did you manage to get into the program at Cannes?

Taisia Igumentseva: I sent my film to the festival by chance. Every year a committee from VGIK sends out a package of approved films, but mine wasn’t in it. I can only imagine the surprise of the jury, who received “The Road To” a month late. I honestly didn’t expect it to be actually accepted anywhere when I was sending it, so I sent out the applications for festivals all together: to France, Russia, Germany. In a month I got a callback. What I liked the most was the voice of the person who called. It seemed like they couldn’t decide what to do with me; whether to take me into the contest or not. The program was already settled by then. There were 14 films in it, and only later in the evening I received a final decision – an invitation to participate in the Cinéfondation contest program.

RBTH: Why do you think the Cannes jury made an exception for your film?

T.I.: It’s better to quote the words of the festival’s organizers: “Thank you for the excellent film, full of humor, wit and with great direction and acting.”

RBTH: What did Alexei Uchitel say about your film?

T.I.: Alexei Uchitel tries to support all sorts of ideas and to direct talents into the right course; he helps you to find your own specific style. That was what I had been looking for when working on “The Road To.” When I was defending it, the committee was going to grade me three out of five – because of the obscene language in the film. But Uchitel didn’t let them, and after a long discussion the decision was to give me a four.

RBTH: What does the title of the movie mean?

RBTH: As I saw it, “The Road To” is mainly about the solitude of a modern man in a huge city, an outsider who cannot fit into any system. Why are you concerned with that theme?

T.I.: The film is not just about solitude. It is also dedicated to love, inner freedom, and many other grand topics.

RBTH: The only thing that seems to please the main character of your film is to go out and heap unprintable words on everyone around. Are you intending to say something about the explosion of civil activity in Russia and especially in Moscow?

T.I: No. This movie was made long before today’s events. For the character, to badmouth is a way to spread his wings, to escape from the dullness of life and to claim his existence. Standing in a yard he feels as if on a stage – he’s wearing a suit; his hair is groomed. It’s as if he turns into a swan from an ugly duckling. With the performance of an excellent actor from the Theatre Arts Studio, Sergei Abroskin, that act of “forced vandalism” acquires a very comic effect.

RBTH: Have you seen the works of other contestants? Whatdoyouthinkofthem?

T.I.: The European films seemed less thoughtful to me. I felt formalism in many of them. The directors tried to speak up on serious topics, but one couldn’t feel their personal attitude and understanding of these topics.

RBTH: What’s the most vivid moment during your stay in Cannes?

T.I.: The victory and meeting great people – like when Jean-Pierre Dardenne and I were walking in the rain for an interview for French TV and spoke to each other as equals. We were laughing, chatting about different stuff. He turned out to be a nice and open-minded man.

RBTH: Do you plan a full-length movie?

T.I.: My favorite screenwriter Alexandra Golovina and I have already finished a plan for a full-length film. Currently we are looking for sources of financing.

RBTH: What is that film going to be about?

T.I.: It is going to be something not less interesting than “The Road To,” alot more topical. The film will be about how modern society is built, about friendship, compromises, and, of course, about love. I can’t tell you the plot now, but the title will be “Slip of the Hooks.”