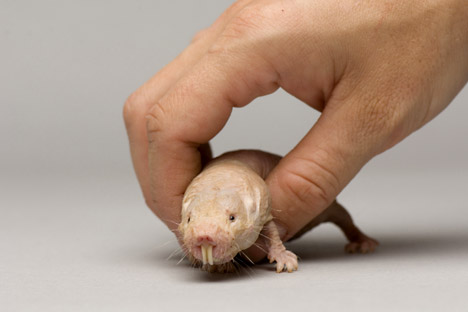 Some Russian scientists believe that the mole vole, like the naked mole rat, cannot get cancer. Source: Getty Images

Underground rodents may hold the key to human longevity

The basement of the Novosibirsk Institute of Systematics and Ecology of Animals is dark and cool: This is the ideal experiment environment. Large metal containers that look a lot like saucepans occupy the shelves. In one of them – at the bottom, covered in sawdust, there is a large carrot and three creeping grey fur balls, either fat mice or skinny hamsters. The experiments carried out by the biologists here should at least interest animal enthusiasts and at most change perceptions of life and death.

Theoretically, humans could live forever, but from the point of view of evolution, aging and death are indispensible. A living being is supposed to mate, produce offspring and provide them with initial support. Once the genome finds a safe haven, there is no need for the predecessor, who will only waste resources. Without aging, diseases and death, evolution would have taken much longer and might not have gone beyond sponges and annelids.

Most scientists tend to believe that a self-destruction program is hidden somewhere in the genetic code. If there is such a program, it should theoretically be able to be discovered and deactivated. The place to start looking for such a program seems to be with the animals that evolution taught to live a long time and almost never fall ill.

The naked mole rat is an African rodent species that lives in Kenya, Ethiopia and Somalia. It has a kind of pig snout on its head with two enormous teeth protruding under it. Rumor has it that the naked mole rat is capable of gnawing its way through concrete with these teeth.

There is very little aesthetically pleasing about these creatures, and yet recently naked mole rats have become beautiful to scientists. The naked mole rat is almost the only eusocial mammal, meaning that communities of naked mole rats are organized like those of bees and ants. The clan is led by a giant queen, which is allowed to mate with selected males and produce offspring.

In addition, the naked mole rat is capable of withstanding lengthy periods of oxygen deprivation; it feels no pain when exposed to acid and has many more unique features. However, what the scientific community is most excited about is that the naked mole rat does not age.

There is a common belief that the more a mammal weighs, the longer it lives. The naked mole rat weighs 30 grams. A mouse weighing the same lives for three years at most, provided it is fed properly. However, the naked mole rat lives until the age of 30 – about 500-800 human years. As it gets older, the naked mole rat does not experience changes in its tissues or cardiovascular system. It as good as dies young.

“This is a mystery that many scientists have been trying to demystify,” said Maxim Skulachev, a leader of the anti-senescence project. “However, no one has been able to make clear what the naked mole rat’s secret is.” There are only theories. For instance, its cells seem to withstand oxidative stress.

Most importantly, scientists have not yet found a naked mole rat that can get cancer. Not long ago, Vera Gorbunova and Andrei Seluanov, Russian researchers at the University of Rochester, managed to find out why the naked mole rat shows this remarkable resistance to the disease. In any organism, healthy cells behave politely and try to avoid pushing each other. This politeness is referred to as “contact inhibition” – as soon as two cells appear too close to each other, they tend to accumulate additional amounts of protein, which slows further cell growth. However, cancer cells do not pay attention to this protein and keep spawning in the body. The naked mole rat has a more complicated contact inhibition pattern, which employs additional proteins. If one fails, there is always another one.

The naked mole rat definitely has something to share with biologists, which is why it is studied in the United States and Europe. But Russia does not investigate the naked mole rat mystery. “It’s a total disgrace! Not a single lab in Russia has a naked mole rat,” Skulachev said. Of course, scientists can afford a few naked mole rats now that there are firms in Africa specializing in the supply of these animals to scientific labs. However, there is a theory that Russia has an animal with similar properties.

“We catch them right here on the outskirts of Novosibirsk,” said Yevgeny Novikov, chief researcher at the Laboratory of Physiological Adaptation of Animals. “We go 50 km south to reach the northern border of their habitat. The mole vole is a steppe beast that normally lives in Kazakhstan, the Volga region and Ukraine. We can only get close to the edge of their habitat.”

The northern mole vole is a very mysterious animal, just like the naked mole rat. For instance, it is not yet clear how this species is divided into males and females. Normal mammals, including humans, have two sex chromosomes – X and Y. These are XX in females and XY in males. But both male and female northern mole voles have the XX pair, so scientists are trying to figure out where exactly sex is inscribed.

Another mystery is whether this creature goes into hibernation. Scientists had heated debates over this before they came up with a tiny thermometer to implant in the rodent.

Tests showed that the northern mole vole does not go into full hibernation. It could go into an intermediate state, when its body temperature falls, but not much, to 30-32 degrees (for comparison, the ground squirrel can get as cold as -2 degrees during hibernation). However, scientists are not so sure about this – northern mole voles might use a division of labor where some hibernate while the rest remain active, heating the lair with their own bodies and causing the odd average temperature.

The most mysterious thing about the northern mole vole is, of course, that it does not age. “Senescence is defined as the age-related deterioration of the state of the body leading to death,” said scientist Yevgeny Novikov. “But we do not see this deterioration here. We measure their indicators – their activity, agility, muscle strength – and they never seem to change. We do not see a decline in energy exchange, meaning that northern mole voles remain young in every respect.”

“The data about northern mole voles never getting old are still unofficial,” Novikov said. “We have not analyzed the statistics yet and have not sent the data to peer-reviewed journals, so we have no moral right to make these statements.”

Maksim Skulachev shares this cautiousness. “A few animals in captivity prove this… But it is not clear how long a northern mole vole caught in the wild will live. It cannot report its age, and the Siberian climate is harsh, which is bad for life expectancy. A few dozen voles bred in Novosibirsk were taken to a lab at Moscow State University. They are being observed now.”

Skulachev believes that the mole vole, like the naked mole rat, cannot get cancer. “We have not found it yet. We believe northern mole voles have their own means of fighting cancerous growths. We want to combine this property with instruments to prevent oxidative stress using our SkQ1,” Skulachev said.

If scientists succeed, the animal will live very long, and its biochemical structure will one day be applied to a human being. This takes time, though. But even a theoretical victory over old age inspires optimism.

The artice is abridged and first published in Russky Reporter. Read the original in Russian here.