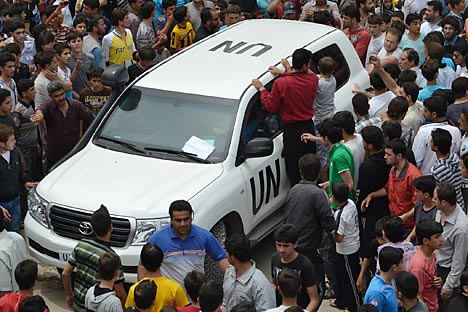 As the U.S. implies it might take unilateral action, Russia, China and several Arab states re-emphasize the need to give the Kofi Annan plan time to work.

The situation in Syria may soon grow into a global crisis. Should the U.S. carry out any action outside the bounds of the UN Security Council, the Arab countries, Russia and China are unlikely to remain neutral.

Speaking to journalists after a closed-door UN Security Council meeting on Syria, U.S. Ambassador to the UN Susan Rice said that the possibility of the U.S. acting outside the UN Security Council to resolve the Syrian problem was “the worst-case and the most likely scenario” at the moment. According to UN observers, this is the first time the Obama administration has declared its readiness to violate the UN Charter.

Victoria Nuland, official spokesperson for the U.S. Department of State announced May 29 that the situation in Syria called for a resolution under Chapter 7 of the UN Charter, which allows the use of military force to counter threats to peace and security. In other words, the United States sees foreign intervention, whether within the authority of the UN Security Council or outside it, as the only way of dealing with the issue.

Several statements by high-ranking U.S. military officers suggesting the possibility of U.S. military action have been rife in the press. On May 28, Martin Dempsey, chairman of the Joint Chief of Staff, announced: “We will be prepared to provide military options if asked to do so.”

The next day, Pentagon spokesman George Little stated with regard to any possible military action: “As far as military options, the focus remains on the diplomatic and economic track. But at the end of the day, we in the Department of Defense have a responsibility to look at the full spectrum of options and to make them available if they are requested.”

Russia immediately responded by warning against bypassing the UN Security Council. “The best way to avoid a catastrophic scenario is to try to implement the Kofi Annan plan, and effort must by made by everybody to comply with UN Security Council resolutions,” Russia's Ambassador to the UN Vitaly Churkin told reporters. Should this fail, Churkin warned, the consequences both for Syria and the whole region will be severe. He therefore urged countries “to think carefully before making gestures, hints of any actions outside of the Security Council and outside of the Kofi Annan plan.”

The Chinese Ministry of Foreign Affairs, in turn, confirmed Beijing’s opposition to any interference in Syria’s affairs.

It should also be kept in mind that although the Persian Gulf monarchies may side with the U.S on military intervention, many Arab countries do not. In February, summing up the results of the Friends of Syria conference, conference chairman Rafik Adbessalem, the foreign minister of Tunisia, said that its major purpose was to proclaim support for the Syrian people. He emphasized that all efforts to this end must rule out any repetition in Syria of the tragedy caused by foreign intervention in other Arab states.

Additionally, even some Syrian opposition leaders strongly oppose foreign intervention. One of the leaders of the Front for Change and Liberation, Qadri Jamil, who refused to attend the first Friends of Syria conference in Tunisia, said: “The purpose of this conference is not to deal with the Syrian issue, but to play as a media campaign for Western countries, led by the United States, to find ways for foreign intervention.”

In other words, the only rationale behind the threats to use force against Syria outside the authority of the UN Security Council is to ratchet up pressure on Damascus to force Bashar al-Assad to step down. This is also the reason for the leak of alleged discussions of the Yemen model for Syria between Moscow and Washington, which implies Assad’s voluntary resignation in return for guarantees of his safety. This is also the reason why Syrian ambassadors were expelled by Western governments after the massacre in the Syrian town of Houla, although investigation into the killings has not yet been completed. Even tougher economic sanctions against Damascus are lined up for this purpose.

So far, no opposition victory is in sight in Syria, and the opposition itself lacks unity, as indicated by reports of repeated dismissals of the Syrian National Council head Burhan Ghalioun. It is also obvious that the Assad regime actually enjoys greater popular support than had been previously thought – hence the urge to expedite the ousting of Bashar al-Assad, a friend of Tehran and an enemy of Israel, from the presidential palace.

The talk of possible action outside the fold of the Security Council – meaning violation of the UN Charter – also serves this aim. It seems, however, that in view of the fates of Libya’s Moammar Gaddafi and Iraq’s Saddam Hussein, the Syrian president will stay the course even if Moscow eases its stance, which in itself is highly unlikely.

“We can hardly speak of Russia making any concessions under pressure,” the Russian president’s press secretary Dmitry Peskov said in response to the U.S. statements.