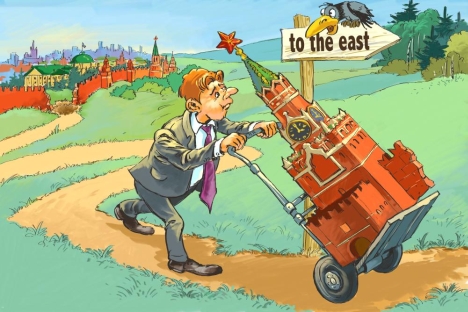 In the midst of the economic instability in Europe and the world, Russia's experts try to make forecasts what foreign and domestic economic policy Russia will follow and whether it will create a new economic center in Siberia.

It’s make up or break up

In the coming years, it’s likely that Europe will lose its status as Russia’s biggest economic partner and that Russia will form closer bonds with the East.

Europe’s unwillingness to take Moscow’s opinion into consideration when it comes to strategic security matters, which became clear during the discussions of the future of the European missile defence system, as well as the economic troubles that the European Union currently needs to address, have prompted Russia to revise the exclusively western foundation of its international policy. An eastern orientation appears to be the natural alternative, given Russia’s geographical location.

In recent years, Moscow has increased its efforts to establish a strong footing in Asia by promoting its economic interests in regional organisations. The feasibility of shifting the centre of gravity eastwards has been repeatedly mooted, but no practical moves have yet been made. However, Moscow has been promoting Russia’s Far East and building up its  economic relations with China, Japan and the rising Asian “tigers”, while also pursuing stronger economic ties with Europe.

But the situation has changed dramatically in the past few months. It is not even just the matter of the election of a new Russian head of state, who appears to be disappointed with the progress of Russia’s European policy. Furthermore, Moscow’s European partners are attempting to reduce their dependence on Russian raw materials and seek alternative energy sources.

This instability, aggravated by the current financial and economic downturn in Europe, has been forcing Russia out of the increasingly inaccessible western markets and into the increasingly available Asian ones, where Russia will be welcomed with open arms.

Crucial internal factors are also conspiring to make the Russian administration revise its future economic strategy and factor in the rapidly expanding economic potential of the Asian countries. The change from the traditional role of Siberia within the framework of Russia’s western efforts to become the vanguard of its Chinese endeavor gives Moscow much more room for competitive maneuver. The only question is how to redirect investment and commodity flows from West to East smoothly enough to turn Siberia, the traditional source of raw materials, into a key modernized sector of the Russian economy.

During the past few years, Russian politicians have discussed two main options for developing the economy of the Far East. The first option was to set up a state corporation to promote the region, and the second involved creating a special state ministry to manage economic development projects there. The new Russian government has opted for the latter and has established such a ministry for the first time. Viktor Ishaev, 64, the former presidential envoy in the Far Eastern Federal District, has been appointed minister for the development of the Far East of the Russian Federation.

Russia has not given up on the idea of a state corporation to implement projects approved by the ministry. Experts agree that Ishaev’s appointment is just the first step in a much more ambitious project, which is currently being discussed in Russia. The idea is to create a so-called third economic capital of Russia in the Far East. During the most recent meeting of the Valdai Discussion Club, a few cities were mentioned that have sufficient potential and favorable locations to make them candidates as the third capital – Ekaterinburg, Krasnoyarsk, and Khabarovsk. Moscow would remain the political capital and St Petersburg the cultural capital.

Those advocating a redistribution of functions between the capitals refer to the successful international experience of sharing capital city roles in Brazil, Germany and Kazakhstan. Those political decisions gave a strong impetus to the development of the areas surrounding the new capitals.

Russia transferred its capital city from Moscow to St Petersburg in 1712, when Peter the Great decided his newly built city on the Baltic Sea was more suitable as Russia’s capital. Russian researchers argue that it was mostly because of that decision that Peter managed to open a window to Europe, providing a major impetus to development of the country for centuries to come.

Experts warn, though, that with all its obvious advantages, the creation of a third capital city beyond the Urals might have unpredictable social and political consequences. The new government does not currently have plans to transfer any capital city functions to a region that is much closer to Asia than Moscow. However, the more complications that arise in relations between Moscow and Brussels, the more frequently the topic of a third economic capital, remote from Europe, will be discussed in Russian corridors of power.

Europe still has a chance to alter the situation, but it seems that the European Union does not have the political will, the economic capacity or any fresh ideas to make a substantial breakthrough in its relations with Russia. This current lack of diplomatic impetus means that relations between Moscow and Brussels can now only progress through links forged long ago.

Russia’s Asian partners, though, are coming up with new ideas and are ready to expand their dialogue with Russia in all areas. The Asian partners do not impose their state systems as administrative models or impose political conditions on economic co-operation.

Moscow has long been disturbed by the attempts made by members of the European Union to encourage it to follow western political models. The idea of punishing the West for its perceived arrogance, especially during the era of perestroika , for what Russia saw as its unwillingness to build equitable relations with Moscow, is deep-rooted in Russian public opinion. If this punishment requires moving some Russian ministries beyond the Urals, a large part of Russian society may welcome this geopolitical decision.

Yevgeny Shestakov is editor of the international politicsdesk at Rossiyskaya Gazeta.

{***Russia needs a new capital in Siberia by Sergei Karaganov***}

Russia’s need to connect to the accelerating locomotive of Asian economic growth combined with the need to redevelop Siberia, especially the struggling areas east of Lake Baikal, calls for the creation of a new capital in the region.

Although U.S. and European companies have found ways to work with China, Russia, which shares a long border with the country, has been dragging its feet, ostensibly over the fear of Chinese expansion into the depopulated areas of the Russian Far East.

There are many reasons for such behavior, but the main one is the inability of the Russian elite to give up its Euro-centrism, which is fast becoming obsolete in today’s world. The elite also refuses to see Asia as anything but a neo-Communist alternative to the European democratic path of development. Nevertheless, in the last two or three years, Vladimir Putin and Dmitry Medvedev have spoken about the need for Russia to look eastward. Trade has increased, although investments are still close to zero.

Then, within the last six months an idea has been making its way through political circles and in the press to create a state corporation, vested with real capabilities and privileges, for the development of eastern Siberia and the Far East. Respected economists have said that such a corporation should not be created. Equally important executives have hinted that perhaps what is needed is not a corporation but a special ministry or deputy prime minister to be in charge of this development. But this discussion has only served to intensify the sense that the idea is not a serious one.

There is a need to develop Siberia, and the Russian authorities should approach this development in a way that is based in today’s reality, not in a desire to restore the past or on outdated stereotypes. Russia should not wring its hands over the worsening trade balance with Asia and harp on the need for new industrialization while neighboring a region with hundreds of millions of far cheaper workers who can work in any industry. Instead, Russia should realize that the new industrialization of Asia, coupled with its growing shortage of water and food, presents Russia with unprecedented competitive advantages and opportunities to produce and export agricultural products with maximum added value.

Creating conditions for the maximum economic opening of the area east of the Urals to the outside world, however, means rejecting the perception of Siberia as a natural-resource-rich semi-colony and instead working to attract as much foreign investment as possible – from China, the United States, Japan, South Korea, the ASEAN countries and, for that matter, from Europe. The Russian government must also provide preferential living and working conditions in the region for talented young people so that those native to the region don’t leave, and those from other regions of Russia will come.

Overcoming the perception of Siberia as a source for raw materials only will be hard to overcome. It requires a dramatic move. And this is why it is necessary to create a new capital in the Far East rather than to continue expanding Moscow, which is already sucking resources out of the rest of the country.

In Brazil, the shift of the capital from Rio de Janeiro to a specially built capital in the hinterland gave a powerful boost to the country’s development. In Germany, the shift of the capital from Bonn to Berlin dramatically sped up the real reunification of Germany and the rise of its Eastern part. If President Nursultan Nazarbayev had not built a new capital in Astana, Kazakhstan would either have collapsed or fallen apart in a very ugly fashion.

The creation of a city vested with some of the capital’s functions in the Far East would pull talented and ambitious young people and businesses there and would make Russia part of a rising world.

To be a modern global country, European culturally and socially and successful in the Asian way, Russia needs three capitals: a political and military-diplomatic one in Moscow, a cultural and legal one in St. Petersburg and an economic one in the Far East. An announcement of such a plan at the forthcoming APEC summit in Vladivostok would dramatically add to the country’s international capitalization, which has begun to diminish due to a lack of development prospects.

Russia needs a project far more ambitious than the Olympics or even a flight to Mars, a project for the new modern development of the Asian part of the country and the construction of a third capital there.

Sergei Karaganov is a Russian political scientist who heads the Council for Foreign and Defense Policy, a security analytical institution founded by Vitaly Shlykov. Karaganov is a close associate of Yevgeny Primakov, and has been Presidential Advisor to both Boris Yeltsin and Vladimir Putin.