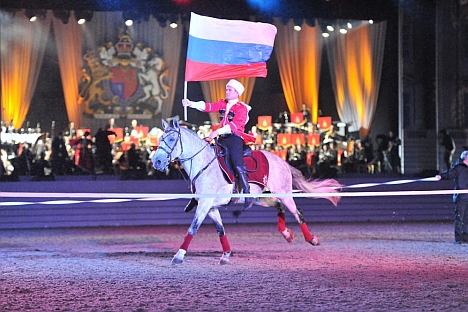 The famed Kremlin Riding School provided much equestrian excitement for the Queen at this year’s Royal Windsor Horse Show.

With what could the Russians surprise the Queen ahead of her Diamond Jubilee? Let me guess - flying past her on horses in the most spectacular way imaginable –this the Russians can do very well.

Slim and athletic, Artyom Vladimirov – what would Hollywood give for him – is famed as the “flying rider”. He stands on horseback, without a saddle, spreading his arms like wings. It takes your breath away.

Andrei Nenashev rides four galloping horses at the same time – he stands on two and controls two more either side of them. The nimble Petr Ivashkov stands on one leg on the back of his sweeping black horse. All these virtuoso tricks are performed at up to 25 miles an hour.

In the final showstopper – and the most dramatic performance – a young woman climbs to the top of a human-horse pyramid; she stands on the shoulders of two horsemen and two perfectly sculpted pedigree horses carry the pyramid as if humans and horses are merged like centaurs.

The horses are magnificent; the national Cossack attire equally so, being designed to resemble the uniform of the tsar’s imperial escort.

This majestic display was part of the Royal Windsor Horse Show staged earlier this month, when more than 1,000 riders from 18 countries arrived with 700 horses in Windsor. For the Russian horses and riders, it involved an arduous four-day, 1,800-mile trip through Europe by truck and ferry to congratulate the Queen on her Diamond Jubilee.

And on whose orders were these ranks of fine cavalrymen dispatched to British shores? The Kremlin. It was Kremlin horses and Kremlin riders. The combined team of the Presidential Regiment’s Cavalry Escort and Russia’s Kremlin Riding School was honoured with an invitation to display their horsemanship before the Queen. So, they naturally sent the crème de la crème to put on a good show.

Almost everyone in Russia knows that the Queen is an excellent rider because almost everyone in Russia is  interested in the British Royal family. I know this from my own experience as London correspondent for Rossiyskaya Gazeta . To report about the Queen too often and toо much is not an issue; there never seem to be enough Royal stories to satisfy the curiosity of Russian readers.

It was Lieutenant General Sergey Khlebnikov, superintendent of the Moscow Kremlin, whom I have known for many years, who told me about the team of Russian riders getting ready to leave for Windsor. The general takes pride in having British guests – the Royal Artillery Band and 19th Regiment Royal Artillery (the Highland Gunners) – attend the international Spasskaya Tower military musical festival held in Red Square at the end of each summer.

It was in Red Square that the British organisers of the Windsor festival spotted the team of Kremlin equestrians in 2010 and invited them to attend the show. All have taken a masterclass at Russia’s Kremlin Riding School, which was established more than five years ago by the Federal Guard Service of Russia and chairman of the board of Uralsib Financial Corporation Nikolay Tsvetkov. The president of the school is the Kremlin superintendent himself.

So why did the Kremlin need a riding school in the first place? To restore the unique horsemanship skills for which Russia has been known for centuries, specifically embodied by the tsar’s elite mounted troops, the Cossack regiments.

Most riders could not even begin to imagine the outrageous exploits a Don or Urals Cossack was able to perform on horseback. In the heat of battle, and at full speed, a Cossack could pass out of sight, hiding under his horse’s belly. Or turn 180 degrees in the saddle to face the enemy – who did not expected a bullet or slashing sabre from that direction.

Cossack tricks on galloping horses were called “spins”, because they left observers with a feeling of dizziness; these “spins” were designed to disorientate enemies on the battlefield. I heard about this from my great-grandfather, who served in a Cossack regiment in the Urals. It was the “Urals spin” that was seen as a particularly complicated manoeuvre.

Trick and treat: the Kremlin School riders thrilled the Windsor crowds with their astonishing feats of skill and bravery. Source: Press Photo

The secret of the Cossack riders’ skills – called dzhigitovka – was passed down from father to son. After the cavalry regiments were disbanded, the art of trick riding was almost lost, but modern Russian riders are rediscovering it using old documentary films and other archive material.

The secret was not only the rider’s mastery, but the specially bred and trained horses. General director of the Kremlin Riding School Boris Petrov says that it is virtually impossible to use foreign horses for dzhigitovka . It seems the indigenous Russian breeds – Donskaya and Budenovskaya – carry the ability to do this sort of work in their genes. “The Russians developed the breeds that could be sent into the heat of battle, where shots are fired and sabres rattle”, Petrov says.

“The Russian market for horse-breeding is currently on the rise, and we hope that, in about 10 years’ time, Russian-bred horses will be traded at auctions and enjoy a strong demand as breeds that are uniquely suited to trick riding. If a country wishes to produce a show similar to that brought to Windsor by our team, it will have to procure Russian horses.”

The Russian programme at Windsor was unique, the Kremlin riders demonstrating horseback acrobatics and mastery of the cold steel that would have made their forefathers, the unsurpassed Cossacks, proud. Truth be told, the role of the enemy on the Windsor “battlefield” was performed by a grapevine with a hat and bottle of water placed on top.

However, if you think that slashing a vine is easy, think again. The blow must be delivered from the shoulder and the warrior should feel the sabre as if it were a continuation of his arm. If the blow is delivered with the wrist only, the sabre will not slice through the vine.

This, along with many other techniques, is taught to would-be Cossacks at the Kremlin Riding School. First of all they are taught to ride standing up on the horse; this is the fundamental skill to master.

In fact, there are only a few riders who have mastered all of these skills; the Kremlin School students have to train eight hours a day to attain this mastery. The riders and their horses must be able to negotiate obstacles – some of which are set ablaze – engage targets at the gallop and throw knives and daggers at full speed.

The Kremlin dzhigit trick riders use special Cossack saddles, because normal tack is unsuitable for stunt riding. The peculiar design of the Cossack saddle and sitting position is ideal fordzhigitovka . When riding in a Cossack saddle, the legs go down in a straight line. Because the legs remained straight, Cossacks never used spurs, but instead had a whip; today, spurs would be dangerous during trick riding. However, the horses of the Kremlin Riding School are so well trained there is no need for spurs, let alone a whip: they start galloping smoothly at their riders’ barely perceptible command.

The riskiest stunts on the horses are carried out by the woman who stands on top of the human pyramid. Angelina Bragilskaya, 24, is said to be the greatest daredevil on the Kremlin team. “We have to cool her off from time to time, because she knows no fear”, Elena Kochetova, executive director of the programme, says of her friend. She openly admires Bragilskaya’s courage, though.

And what will the fearless equestrian do after leaving trick riding? “I will stay close”, Bragilskaya smiles, nodding at her stallion. “I cannot  imagine my life without horses. I guess I’ll always be around them.”

Another star is 27-year-old Yulia Kalinina. A fabulous acrobat, Kalinina is a combat weapons master, showcasing her remarkable skills during dzhigitovka programmes. The audience is mesmerised by the petite performer, who spins on horseback like a gymnast on the bars to chop the “head” off her enemy. Kalinina is a professional economist who started riding at an early age. She worked as an accountant in her native Volgograd before she came to the Kremlin Riding School. Coming from Cossack stock, it is no surprise that she preferred the horse and sabre to her calculator.

Vladimirov, 25, who is famous for his “flying horseman” trick, creates complex stunts together with his coach – a forward somersault or backward somersault to the ground from the galloping horse. Vladimirov, who is from Khotkovo, near Moscow, trained at a private horse club before joining the Kremlin School.

The school accepts children from the age of two. “Children come to their first lessons with their parents, and we train the child, the mothers and the fathers to help them cope with fear”, Ms Kochetova says. “So we have turned into a family school. As soon as they turn 12, they start training seriously to become riders.”

It all sounds very impressive. But is the Kremlin School just a club for the Russian elite and their offspring? “Not at all”, Ms Kochetova assures me. “The school is open to everyone. Many children come from far away regions, and they are from ordinary families.

“We are a not-for-profit organisation; all the money we make at shows is invested in further development. We do it for pleasure, sport and as a history lesson. We are reviving the traditions of which we are so proud.”