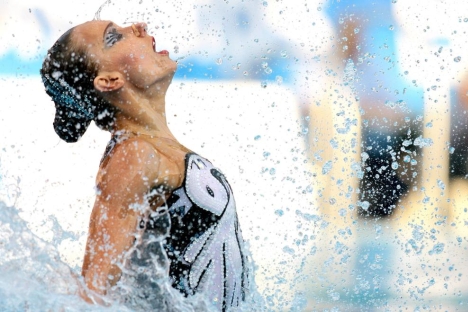 The Russian synchronised swimming team is training hard with its sights set on gold. Its leader Natalia Ishchenko tells RBTH about life at the top of her sport.

When Natalia Ishchenko was taken to a synchronised swimming school aged five, the coaches did not rate her chances, saying she was not flexible enough. They were wrong. Ishchenko, now 26, is one of the most technically perfect and successful synchronettes in the world.

Ishchenko won gold at the 2008 Summer Olympics in Beijing; she now has 16 world and seven European titles. In 2010, she became the first synchronised swimmer in the European championship history to win all four routines – solo, duet, team and combination.

The Russian team are the reigning champions. The British team are not expecting to beat them, having come 14th in the Beijing Olympics, but they are hoping to finish in the top six.

Natalia is the leader and face of the Russian team, used to working 24/7 at all major international competitions. But this year the burden on the Russian team leader and her colleagues has doubled,even before the start of the Games, as they had to take part in the qualifying round, too. Here, Ishchenko describes her team’s preparation for London 2012.

Russia Beyond the Headlines: The Olympic qualifying round for the leading team in synchronised swimming seems too much, doesn’t it?

N.I: The qualifiers have indeed caused some problems for us. We could have started working on our Olympic routines earlier, just like the Chinese and Canadian teams did as soon as they won the Asian and Pan-American Games. Or the UK team, which enjoys the benefit of being the host nation. Although we won the world championship in Shanghai, which would be an automatic pass for us to the Olympics in any other sport, we had to compete for an Olympic licence again and prepare two routines – one for the qualifying round as well as one for the Games.

RBTH: Did you ever think about protesting to get the rules changed like the Spanish did?

N.I: These are the approved regulations which you have to abide by. Because we couldn’t afford to participate at half steam, we decided to put our efforts into resolving the difficulties instead of fighting them. We took that tournament seriously and prepared for it very hard. We increased the number of runs instead of the number of hours in the pool. We had to double our efforts, because running through the entire routine is the hardest thing to do.

RBTH: Do you think you have benefited from going through the qualifying round in London?

N.I: On the plus side, we worked at an Olympic facility so we know what we’re in for. We saw everything, tried everything and found no defects. The London Aquatics Centre looks a lot like the one in Beijing – the pool, the stands.

N.I: We only showed “The Dolls” once, at the world championships, so you can’t say it is an exhausted routine. It is very strong, both technically and artistically. We won the world title with it in Shanghai, and we hope it will bring us luck in London. But we have changed lots of things and added a few new elements. The only thing left is the swimsuits.

RBTH: They are unique. Where do you get such masterpieces?

N.I: The coaches and swimmers tell the designers what they would like to see on the swimsuits. They bring designs to us and we finalise them together. The suits are tailored individually to fit each swimmer perfectly. There are some standards we have to meet – we can’t have very high cuts for example.

RBTH: Who will make the Russian national team at the European Championships ahead of the Olympics?

N.I: We have decided that only two swimmers will go to the Championships in Eindhoven – Svetlana Romashina and I. We will take part in solos and duets, while the team perfect new routines. We will show our free routine for the first time. The Olympic duet will also include some new features.

RBTH: So are you trying to safeguard your unique features and lifts from your competitors?

N.I:  Well, we wouldn’t like to see our elements being repeated by another team; however, it makes it clear that you’re the leader and they use you as an example. They tend to copy the best combinations, and the only thing you can regret is that the element loses its uniqueness and turns into a beautiful yet very hard position. We should be allowed to patent our signature moves but, in our sport, they don’t give names to elements to celebrate the people who invented them, like they do in sports like rhythmic or regular gymnastics.

RBTH: How do you combine your sports career with family life?

N.I: My husband [Sergei Anikin, who won a silver medal at the European Diving Championships] is a former athlete so he understands very well why I have to stay away from home for months, why I get home tired after training or from the camp. His support helps me so much. Besides, we have telephones and Skype. When we train at Ozero Krugloe camp near Moscow, I have one day off every week and go home. There are no privileges for married women.

RBTH: Describe a typical day for you and your team members.

N.I: Our morning training session starts at 8am and we have choreography lessons for one-and-a-half to two hours, followed by three-and-a-half hours in the pool. Then it is time for a massage, after which we sleep for two hours, like when we were children. The pressure is so hard that your body cannot sustain it and you simply pass out.

You cannot have a decent night’s sleep, either – the night session ends at 10pm, then you have dinner, relax after exercise and go to bed, but you have to get up at 7am to be in time for the next session, and this goes on day after day. But we all know why we put in so much effort and spend so many hours in the pool. Our common goal is to win at the Olympics.