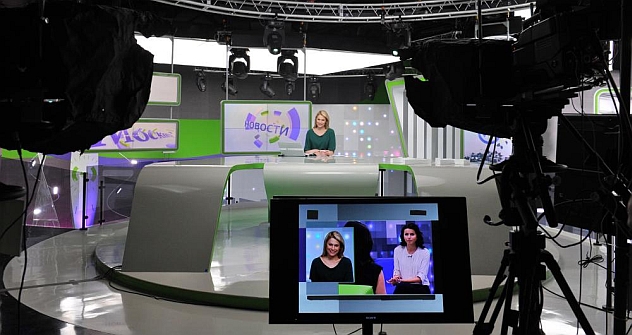 An abandoned Vesti state TV van that angry protesters had splattered with milk, littered with plastic bottles and plastered with slogans was one of the most striking images of the protest on May 6 that ended in clashes on Bolotnaya Square in Moscow. It was a symbol of the mounting animosity between the internet-savvy opposition and the nationwide television networks, which have periodically aired critical documentaries about the Kremlin’s detractors.

But it also pointed to a larger shift taking place: the widening gulf between two Russian media landscapes – on the one hand, the lively, independent online media that in part nurtured and united the opposition and, on the other, the state-dominated television networks that were brought to heel under Vladimir Putin’s first term in the Kremlin.

Related: Television for the elite

In a country that traditionally gets its news from monochrome, pro-Kremlin television, the opposition was forced to rally and unite online. But analysts say that national television’s monopoly on the news is starting to crumble – and not just among opposition-minded groups.

“They are fading, just like the American networks,” said Ivan Zassoursky, director of new media at the Faculty of Journalism at Moscow State University and founder of Chastnyi Korrespondent .

“First of all there are Facebook and Twitter – new global players entering the market. Second, in Russia we have a huge and booming industry of online media which are independent from traditional media because in most cases they originated as independent publications. Most online media are free, supported by advertising, and are profitable.”

In a sign of Russia’s changing media appetites, 24 percent of Russians – up from 11pc in the space of a year – told the Levada Centre poll last February that they now look to the internet for the latest news. The poll also revealed that 28 percent do not trust what they see on television, although the same poll showed that 63 percent do believe the nationwide television channels. “Traditional media are being eroded slowly but surely, although not completely – it  is still enough to sway voters. These are the people who matter in politics,” said Zassoursky.

The trajectory of these shifting media appetites also poses a problem for the state and the country’s media moguls who wish to keep their grip on the levers of news output. In Russia, the state owns the lion’s share of media – three national television stations, 89 regional television and radio stations and three newspapers. The rest is owned by individuals. But much of the so-called “independent” media is indirectly controlled by the state, according to Boris Timoshenko, analyst at the Glasnost Defence Foundation.

The nominally private NTV channel, long seen as a tool of Kremlin spin by the opposition, in March aired a documentary called the Anatomy of Protest in which the channel alleged opposition activists were paid “money and cookies” to demonstrate against Putin’s formal return to power. It also implied that foreign governments were behind the demonstrations, prompting criticism of the channel from its own journalists. Mr Timoshenko said the programme was aired at the behest of the Kremlin but said it was difficult to establish an overall pattern in the relationship between media ownership and its editorial line.

Timoshenko said that, while federal television stations have blacklisted prominent members of the opposition and often toed the government line, the authorities have allowed certain outlets with smaller audiences to be more critical. “We’ve long had the impression that the Kremlin deliberately leaves a small island of free press so that it can turn around and say: what do you mean we don’t have a free press – what about Ekho Moskvy radio station and Kommersant, Novaya Gazeta and a handful of other newspapers?” he said.

“The other reason might be that they don’t want to anger those who don’t agree with what is happening in the country.”

But even these leading outlets in independent journalism came under pressure during the protests that broke out in December, dramatically ending a period of seeming entrenched political apathy in Russia.

The influential Kommersant paper, owned by oligarch Alisher Usmanov, appeared to come under editorial pressure in the wake of December’s parliamentary elections that saw Putin’s ruling United Russia party suffer a severe dent in popularity. The billionaire Russian fired an editor ofKommersant-Vlast magazine after he published a ballot paper cast against Putin that was supposedly made void because it was defaced with an obscene anti-Putin slur. In February, Gazprom Media reshuffled the supervisory board of Ekho Moskvy in a move that the station’s editor-in-chief called an attempt to “correct editorial policy”.

Zassoursky said that the relationship between ownership and editorial line was nuanced. He said that, while in many countries money and business dictates politics, in Russia politics dictates business and money. “The media is always stuck in between,” he said.

LifeNews, a Kremlin-connected online tabloid, in December published embarrassing phone-tap recordings of opposition leader Boris Nemtsov’s private phone conversations, in which Mr Nemtsov denigrated fellow protest leaders. Released in the wake of the largest opposition protests to have hit Russia in well over a decade, the phone tapping appeared to be a clear attempt to discredit and divide the opposition. A criminal investigation was launched, but nothing has been heard about it since March.

It came as little surprise that Nemtsov – who is seldom if ever seen on national television – had to go to TV Dozhd, an independent online television station, in order to publicly respond to the publication of his phone conversations.

While investigations regarding the phone-hacking scandal in Britain continue, and many are being called to give evidence to the Leveson Inquiry, it remains to be seen whether the LifeNewsphone- hackers will be called to account.