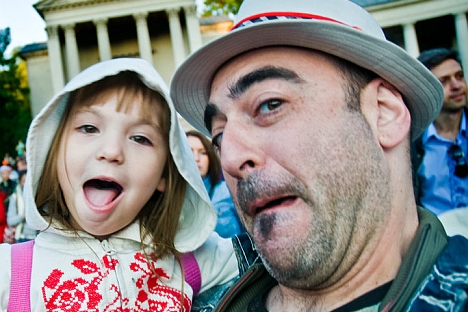 Marco North, a creative director for an International art studio in Moscow, approaches his blog "Impressions of an Expat" very professionally, perhaps because of his parallel career as a novelist. Pictured: Marco and his daughter Eva. Source: Press P

There are clear stereotypes about expats in Russia. They have their own favourite bars, restaurants and clubs. They join expat-oriented religious groups and visit Western-style medical centers. There are even guidebooks with sections dedicated to them and their favorite spots in town.

But expats are far from a homogeneous group. Their diversity is on display in the blogs they write. They all tell the story of life abroad, but each blog belongs to a different person whose life carries different baggage.

Lindsay, an American student who spent a year in Russia studying at the European University in St. Petersburg, took the most traditional approach to blog writing. With her husband back in the U.S. and the intention to move back home at the end of her studies, Lindsay started her blog, Life in Russia., mostly to share her experiences, photos and impressions with family and friends. "I didn't call my family often, so it was their way of keeping in touch with me, I think. My pictures are the highlight of my blog for my family, and of course, when I have a good story to tell, they always appreciate that." Since returning to the U.S, Lindsay has continued updating her blog and sharing her memories of her life in Russia. She hopes that this process will be a way of maintaining her connection with the country.

While for some blogging is a way to collect memories, it can also help get through difficult moments. Many expats cite the therapeutic effect of writing a blog. Jay, a stay-at-home dad from the UK based in Moscow, started writing his blog, English dad in Moscow, in 2009, after his wife's job brought their entire family to Moscow. Being alone in a small apartment with his baby for most of the day, Jay found writing a way to escape the loneliness of being in a big and unknown city and to deal with the challenges of his new role as a stay-at-home dad. “Just the act of writing helps to relive stress, even if you don't get any replies,” Jay said. “It gives a lot of pleasure in helping others and hopefully giving others something funny and interesting to read about.” In his blogposts, Jay explores the social aspects of his life in Moscow, from healthcare to tourism and education. And, of course, space is given to the peculiarity of his situation as a stay-at-home dad. "I have been my own one-man sociological experiment as a stay-at-home dad and expat living in Moscow." In a country where traditional gender roles are rarely subverted – and surrounded by expats that, according to Jay, follow the same diktat – he has always something to share with his readers.

Although for some writing blogs is a private form of analysis targeted at a small circle of family and friends, some bloggers find a way to make a business out of their writing. Jennifer moved to Russia in 1992 to open an office for an American tour operator. She is now a full-time writer and runs two blogs - The Moscovore, designed to guide people through the world of food in Moscow, and Russia Lite, a humor blog documenting her life as an American woman married to a Russian man (referred to in the blog as HRH - "Handsome Russian Husband"). Jennifer started blogging in 2009 after an agent suggested it as a way to build an author platform for a book she was writing at the time. As her blogs gained traction she managed to turn them into a profitable activity. "The easiest way to make a living from blogging is by selling advertising on the blog’s pages, but this is very underdeveloped in Russia. Bloggers can also review products and services for a fee, or place sponsored content into their blogs." One thing that she is decided not to sell out on, however, is the quality of what she writes. Being a professional blogger means that she is aware of the importance of providing her readership with interesting and entertaining material. No ranting or venting is allowed in her blogposts.

Marco, a creative director for an International art studio in Moscow, approaches his blog very professionally, perhaps because of his parallel career as a novelist. Marco’s weekly posts are little works of art, but it's the story behind the posts that makes the blog so special. Impressions of an Expat is the result of a series of events that brought him to Moscow along with his life as a single father. Marco had to leave his home in New York after his ex-wife, a Russian citizen, kidnapped their daughter Eva and brought her back to Russia five years ago. After years spent as the object of blackmail from his ex-wife, struggling with the Russian bureaucracy and clashing with a legal system that favors mothers over fathers in custody cases, Marco has only managed to reach informal agreements with his ex-wife. She currently allows him to care for Eva, who has recently turned seven, most of the time. In order to deal with this situation, Marco had to put his career as a writer on hold. This is when the blog started taking shape. “The blog kept me from going completely crazy,” Marco said. He did not wish, however, to capitalize on the certain aspects of his story. “Quite honestly, there is so much I don't say in my blog,” he said, before adding: “That first day when it's warm enough and I can take my daughter to the playground to play, I could probably cry. These are the things I try to write about in the blog.” 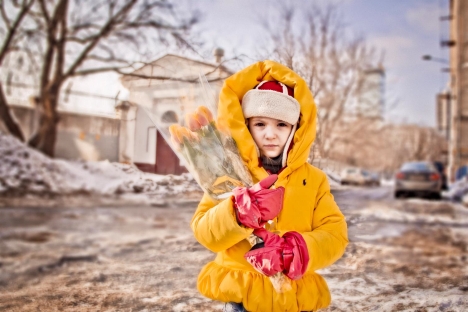 Impressions of an Expat is not a journal, and, despite being an autobiographical account of moments of his life in Russia, it is different from many other blogs. At first sight it appears carefully orchestrated, with a distinctive, poetic writing style. But none of it is fictional. Marco defines it as his "confession," "honest stuff" that he lets out, but also as a real challenge as a writer. He often uses his photographs and the occasional short film he creates as an aid, trying express what words cannot. People are very responsive to it. Through his blog Marco has had the chance to get to know readers from more than 100 countries. "If it wasn't written well, people wouldn't connect to it."