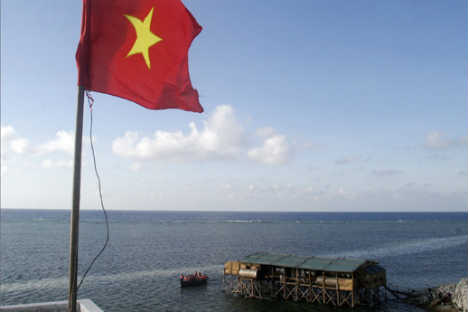 Scent-marking is a common form of canine communication. The dog’s urine tells other dogs just about all they need to know such as how long he’s been around – and if it is a bitch, its sexual receptivity, mating availability, etc. By the way, a nervous dog may also spray urine to reassure himself that everything is all right. Sometimes – but not necessarily – it is also a way of asserting dominance, of supporting the social order. (Dogs like hierarchy.)

To be sure, the United States Defence Secretary Leon Panetta’s visit to Cam Ranh Bay on Sunday was an act of scent-marking – if there is such a thing in the world of international diplomacy. And its leitmotif will be keenly studied by strategic pundits the world over.

A range of interpretations becomes possible. Surely, when a US defence secretary visits the Cam Ranh Bay naval base over three decades after the Vietnam War, it is an act pregnant with possibilities. Cam Ranh Bay sits tantalizingly close to China and finds itself right in the middle of the epic drama unfolding in the South China Sea.

And these are times when the US is racheting up its “assertiveness” toward China. The US State Department just taunted China with another rude missive on the anniversary of Tiananmen Square uprising.

Only the day before he arrived in Cam Ranh Bay, Panetta announced in Singapore that the US would shift the bulk of its naval fleet to the Pacific as part of the strategy of “pivot” to Asia. No doubt, it was a sort of marking of territory.

However, varying interpretations can be made, including that Panetta was actually endeavoring to hold out an olive branch to China – “suggesting that the two often-feuding world powers must learn to work better together for the benefit of the entire region.” At this point, interpretation becomes really hard, if one were to get into details.

Panetta said, “By 2020, the Navy will reposture its forces from today’s roughly 50/50 split between the Atlantic and Pacific to about a 60/40 split between those oceans – including six aircraft carriers, a majority of our cruisers, destroyers, littoral combat ships and submarines.” The big question is, 60% of what?

That is indeed a massive power projection. Thus, China has drawn the appropriate conclusions: A) No matter Panetta’s assurance that no harm is intended to China, the US strategy “must be watched closely”; B) The US reposturing is neither “desperately serious” nor altogether insignificant; C) China should hope for the best, but “prepare for the worst”; D) China has the capacity to hit back if its interests are threatened.

In sum, China’s reaction is as ambiguous as the US intentions. This is where Panetta’s Cam Ranh Bay visit makes things very, very interesting. Enter Vietnam.

Hanoi has a deal with Russia for the refurbishment of Cam Ranh Bay (which used to be a Soviet base). Is it that Vietnam is looking beyond that exclusive deal with Russia and contemplating a move to make Cam Ranh Bay available to the US Navy, too? As the East Asia Summit in Hanoi was drawing to a close in October 2010, Vietnamese Prime Minister Nguyen Tan Dung made the surprise announcement that Cam Ranh Bay would once again be open to port calls by foreign navies.

But Vietnam seldom conveys its desires openly. There have been reports previously that Moscow too would love to “get Cam Ranh Bay back.” After all, it is one of the finest deep-water anchorages in the entire southeast Asia.

The US would be mighty pleased to secure regular access to Cam Ranh Bay for its ships to undertake repairs and resupply. However, Panetta will have to weigh how estranged from China his hosts in Hanoi could be so as to fall into Uncle Sam’s arms – and, indeed, if the estrangement is for real and, more important, whether it would prove durable.

Meanwhile, the Vietnamese hosts also would need to carefully interpret the import of Panetta’s scent-marking. There is apparently an old Vietnamese saying, “A distant water can’t put out a nearby fire.”