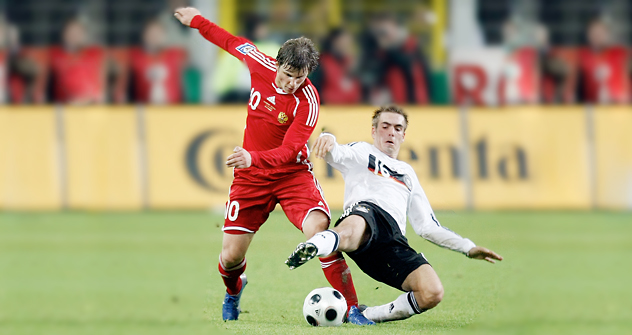 Russia will be sending an experienced team to this year’s Euro 2012 – is that good or bad?

Russian national team coach Dick Advocaat said at a recent press conference that the goal for this summer’s Euro 2012 soccer tournament is for the Russian team to make it to the final. This declaration is in contrast to conventional wisdom, which earlier indicated that Russia would be happy getting out of the group stage of the competition. As a goal, making it out of the group stage is both challenging and achievable. Making it to the tournament’s final, however, would mean that the Russian team not only has to live up to its billing as the favorite in a group with Poland, Greece and the Czech Republic, but also get through traditional powerhouses like Germany and Spain. The road to the final may only be five matches, but experts consider that a long shot at best for the Russians. In the eyes of the odds-makers, not even a highly respected and pragmatic coach like Advocaat can make that big of a difference.

Advocaat took over the Russian team two years ago, replacing fellow Dutchman Guus Hiddink. Hiddink orchestrated a fresh brand of attacking soccer, which was exhilarating to watch when the Russians were in form. The team, built around Zenit St. Petersburg superstar Andrei Arshavin, was all but out of the 2008 tournament until Croatia gave the Russians some help by beating England in the final day of qualification play, securing Russia’s passage and keeping England at home. Such a turn of events made believers out of Russian fans, who considered Hiddink to be a good luck charm.

However, Russia’s success in 2008 did not depend only on luck. The team improved with each passing game and defeated the heavily favored Netherlands in the quarterfinals 3-1 after extra time. The hype soon followed, with analysts saying that Russia delivered a better brand of “Dutch” football than the Dutch themselves. But two days after defeating the Dutch, the Russians proved to be outmatched by eventual tournament winner Spain, losing 3-0 in the semifinal. The Russian team built off its strong European showing in the subsequent World Cup qualifying campaign – until a home loss to Germany in Fall 2009 derailed the Russians. First, the Russian team lost out on the first place in its group before then losing to Slovenia in the playoffs and missing out on the World Cup altogether.

All of a sudden, Hiddink declared his desire to spend more time at home in the Netherlands, paving the way for Advocaat to take over. Advocaat was no stranger to success in Russia; he led Zenit St. Petersburg to glory in the Russian premier league and in the UEFA Cup as well. There was little emotion surrounding the choice of Advocaat as national team coach. The only measure of his success would be whether or not his team qualified for Euro 2012. Going on merit alone, the campaign was a success as Russia won its group – made up of Ireland, Armenia and Slovakia – with a total of 17 goals in 10 matches.

But the team did not pander to the media, and in the days leading up to Euro 2012, the team has encouraged headlines like “Advocaat’s character callous” (RIA Novosti) and Rossiyskaya Gazeta has called the team “selfish” and “moody.”

Despite the bad press, Advocaat continued to handle things in his own unique way. He did not present his preliminary roster for the Euro 2012 tournament himself, but simply turned it into the Russian Football Union. Maybe this is because the roster has hardly changed since 2008. With the exception of Zenit duo Alexander Kerzhakov and Igor Denisov, both of whom missed out on the tournament four years ago, Advocaat has had few viable options to shake up the roster. Despite millions in investments for training centers, few players have been able to progress from the youth leagues to the senior ranks. Moreover, most experts do not see an influx of young talent maturing in Russia for at least another couple of years, if at all.

But even so, this reliance on the senior players is astounding considering that none of the players on the 2008 roster has improved. Four of the five players who started playing abroad after Euro 2008 have since returned to Russia. Arshavin (Arsenal), Roman Pavlyuchenko (Tottenham Hotspur), Yury Zhirkov (Chelsea) and Diniyar Bilyaletdinov (Everton) were all relegated to the bench with their English clubs, while Pavel Pogrebnyak has recently moved from VfB Stuttgart to Premier League outfit Fulham.

The average age of Russian players in a friendly against Denmark in late April was 28.8 years. On the same day, Germany fielded a team with an average age of 24.4. Yet Russia won 2-0, while Germany fell to France 1-2. Maybe Arshavin and his supporting cast really can make the impossible happen and send this generation of players off into the proverbial sunset by reaching the final.