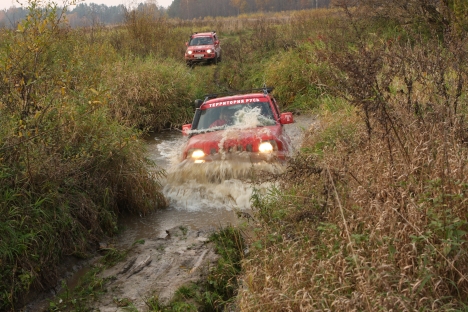 Evy Hua of RBTH took an off-road jeep on a novel tour. What she experienced was a rich portrait of intimate Russia, and that made all the difference.

Once the jeep got stuck in the mud in the deep woods of Yaroslavl, it was obvious that we would be stranded for a while. In the emerging tradition of extreme tourists, we had discovered off-road sightseeing as an exciting way to see the Russia, in this case the Volga River region, most don’t see. The good news about off-road tourism is the freedom of the wind and mud in your face and the absence of notorious Russian traffic jams. The bad news is, sometimes you get stuck in the mud.

Territory Rus, a small start-up operator, offers both weekend and week-long trips. They take small groups in a convoy of red, off-road jeeps. Three entrepreneurs founded the company in 2011; they shared a dream of helping Russians (and foreign tourists) rediscover the country’s rich history outside its two major capitals.

Marco Zecevic, 32, is a Serbian-born professional off-road driver who arrived in Russia as a refugee in 1989. After earning a biology degree at Moscow State University, he followed his passion for extreme sports until teaming up with partners Leonid Leonov, 31, and Igor Ryzhov, 30, to found Territory Rus. Leonov worked as a strategy and investment manager in several high-profile companies before they launched the company, while Ryzhov was a lawyer.

“I actually wanted to be a historian as a youth, but didn’t take this passion seriously enough and ended up flunking my entrance exams,” explained Ryzhov. “After getting my law degree, I was heading the client relations department at a major car leasing and fleet management company, when I finally got tired of pushing papers around all day. I wanted my passion for history not to be confined to two weeks paid vacation each year.”

After investing several million rubles of their own money in startup capital to purchase four Suzuki jeeps, a LandRover Defender (for the guides) and do some promotion, the three enthusiasts learned the real challenge lay in attracting clientele. “Our meeting with a leading executive from Intourist (Russia’s largest tour operator) was a sobering experience. He reaffirmed our worst fears: Russians just don’t like to travel inside their own country,” said Ryzhov.

A recent poll showed only 30 percent of Russians were interested in spending vacations in their homeland (among those, most preferred the resorts of the Black Sea, not trudging around in the mud outside Moscow), with the most popular destinations of 2011 being Turkey, Spain, France, Italy and the Czech Republic, respectively.

“I think our countrymen have a hunger for more exotic places,” said Ryzhov. “This might be because of the travel restrictions that were in place during Soviet times. The fact that we have foreigners among our clientele shows that Territory Rus can compete with foreign destinations.”(Our group had two couples from France and one other group of Russians.)

“We see these kind of tours as a mission. We want to introduce people to interesting cultural places in Russia, but in a fun and active way. Most of the places we visit on our tours are not accessible with ordinary cars and are not connected by paved roads, and that’s where the off-road driving comes in. From the start we wanted to realize this with highest quality of equipment and service,” he added.

Our trip brought us to Alexandrov and Pereslavl Zalessky, cities of the famous Golden Ring, a circle of smaller, ancient towns around Moscow. The tour started with a visit to the famous springs of Sergius of Radonezh, mostly visited by locals. Many springs are connected to a holy place that inspires stories of mystical appearances. Surrounded by small wooden chapels, the springs are famous among pilgrims for a quick, spiritual revival. The complex of Radonezh appears more like a sanctuary spa, with several springs connected by wooden bridges over the swampy area.

Tourists hardly ever make it here. It is a haven for elderly women with headscarves (which are usually worn in orthodox religious places). Dressed in pastel-colored nightgowns, they dip into the holy baptism pool, and emerge drenched, reciting melodic religious prayers. The place is considered ideal for baptisms, which are performed regularly.

A few hours later, we visited the ancient city, Alexandrov, where Ivan the Terrible murdered his eldest son in a fit of rage in 1581, the episode serving as inspiration for the famous painting by Repin. Lunch was served at an 18th-century factory converted into a restaurant, followed by a tour of Pereslavl Zalessky the following day. Pereslavl’s historical center (somewhat ironically called Red Square, even though it is a field of green grass) features a statue of Alexander Nevsky, great-grandson of Yuri Dolgoruky (founder of both Pereslavl Zalessky and, more famously, Moscow).

Pereslavl Zalessky is located on Lake Plesheyevo, where the famous Princess Yevdokiya escaped invading Mongolian armies during the Golden Horde. Legend has it she sailed to the center of the lake; Yevdokia was hidden by a thick fog as the Mongolians burned down the town in a rage. The Znamensky Church in Pereslavl Zalessky honors this event. The Lake is also the place where, many centuries later, Peter the Great constructed and tested the first ships of the Russian Navy in its shallow waters. Today Lake Plesheyevo is a haven for sailors and fishermen.

A more recent monument is the missile-storage facility, a grass-covered relic from the Cold War, which we reached after another one-hour ride on bumpy forest roads. Well hidden in the middle of the woods, it was one of about 50 missile sites placed in two circles around Moscow to defend the city following World War II. “Nowadays we have only two missiles, but those two alone can cover the entire defense of Moscow” added Dasha, our young tour guide, who recently joined the team.

During the trip, there are frequent breaks in idyllic villages replete with emblematic wooden country houses. Comfortable amenities are available for those who don't want to “rough it,” from air-conditioned jeeps to small hotels with a simple, but generous breakfast. The hotel for our trip included a small horse farm, a restaurant with a windmill and small private cottages for rent.

What to bring on the road less traveled

- Warm clothes to change into; lots of layers to put on and off

- Camera to document the moment you are stuck in the mud

- Sport or hiking shoes (Rubber boots as well as rain jackets are provided by the operator.)