When designing is over 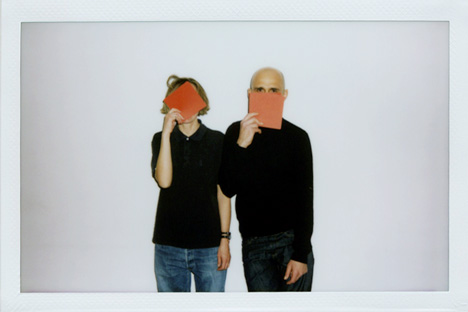 Nina Neretina and Donis Pouppis, who make up the design duo Nina Donis, have been surprising fashion critics for more 12 years with their simple forms based on non-Euclidean geometry.

In an exclusive interview with Ekaterina Mikhailovna of Russia Beyond the Headlines, Neretina and Pouppis discuss the connection between politics and the fashion industry.

Russia Beyond the Headlines: Both of you graduated from Moscow State Textile University. In your opinion, is it possible to get a decent education in the fashion industry somewhere in Russia?

Nina Neretina: A few years ago, searching for an assistant, we visited that university on the day students passed their final examination, and we were horrified to discover that time stood still there. We saw the same degree works, based on the same scheme that we had been taught in the past. And, in fact, when we entered the university, the works created in the previous years were absolutely the same – cheerless and formal. And that is very sad, of course. Now some new design institutes have appeared, including private ones. And I want to believe that they follow the European path.

RBTH: In 2005, you showed your autumn/winter collection at London Fashion Week. What did it give you? What new prospects did it open for you?

Donis Pouppis: The most important thing was that we were noticed on a broader level. We got orders from England, America, France, Korea, and Italy. But in the end we failed to organize dealings with these customers. In Russia, everything is arranged in such a way that it was simply impossible to do that. Laws, rules and bureaucracy put insurmountable obstacles for the development of a small business. Export and import, customs, certificates, etc. – all this creates problems that suppress business development in general and close any path leading to the international level. The only way is to do everything using black or gray schemes of work. But this way didn’t suit us and it doesn’t suit us now.

RBTH: Why do you avoid advertising in glossy magazines?

N.N.: We don’t advertise because at this moment and at this level we simply don’t need that and it is senseless for us. And, generally speaking, one has to understand that laws and rules of advertising that work in the Western world are ineffective here, as in Russia there is no fashion industry as such. There are many fashion weeks and even more fashion shows of various levels, and that’s it.

D.P.: In Europe or America, if an editor-in-chief of an authoritative glossy magazine notices some new designer and writes about him, the next day this designer will get many commercial proposals. He is given a powerful incentive and a big chance. And the entire industry begins to work for him: production, textile manufacturers, retail trade, show rooms, logistics, press agencies, advertising, etc. Thus, the entire mechanism is started up.

RBTH: In 2008, you said that in Russia people are afraid to stand out in a crowd, that they are “gray” for the most part. In your opinion, has the appearance of a Russian changed within the last 5 years?

D.P.: In this context “gray” doesn’t mean that everyone wears gray clothes; it means that all people are equally cheerless and featureless, though they may be dressed-up well all over. Of course, there are other people as well, interesting ones, who don’t want to imitate anybody. But there are so few of these people that they stay practically unnoticed in the crowd. If we look at people in the metro, the crowd is featureless and gray there, and this time – literally. And if we take, for example, people who walk about a big shopping center on a day off, there is a riot of colors and smart clothes, but, in fact, they are all equally featureless, they are simply dressed according to the formula: “The more glamorous, flashy, ringing, shining it is – the better.”

N.N.: I think that not for everyone, but for the majority of people in Russia, the rule to follow in one’s clothes is: “not to be, but to seem.” And, as a rule, it means to seem rich. This is the reason for all these full-length fur coats, gold, rhinestones and diamonds and all kinds of other pseudo-attributes of luxury. But now it is more and more often that I notice some young people who use their clothes as a method of self-expression and communication between each other. And that is the diversity that our society lacks so much. And it is not one group of people – there are punks and people of fashion, and hipsters, and office staff, and so on. It gives me hope that all these subcultures will develop and finally Russia will escape this dullness.

RBTH: What does sexuality mean for you? How is it expressed in your clothes?

D.P.: The longer we work in this sphere, the more we are convinced that “clothes don’t make the man”. It may, of course, help tell something or, on the contrary, hide something, but in the end clothes can’t make a person be someone else, for example, they can’t make a stupid man clever.

N.N.: Sexuality comes from within. It is a person’s behavior, manner of speaking, look. Clothes may just help a little here. If you put some sexy clothes on an unattractive, flabby body, that won’t look sexy, rather to the contrary.

D.P.: And, generally speaking, the notion of sexuality is individual. Very often things that someone considers sexy may seem vulgar and obscene to some other person and vice versa. Everything that we want to express, including sexuality, may be seen in our collections.

RBTH: Do you have any favorite designers in Russia or abroad?

N.N.: We have our favorite designers and there are certain collections of theirs that we love. But I can’t say that there is a designer whose absolutely every collection we like. There is no “absolute” authority for us. Martin Margiela and Helmut Lang are the great modern designers. It is a pity that they’ve left this sphere. Some great designers, of course are: Jean Paul Gaultier, Vivienne Westwood and Rei Kawakubo – in their early collections.

D.P.: There are, certainly, many worthy designers in Russia. But again, due to the difficulty of working in our country nobody will ever get to know them. As from those who manage to break through all this, we like Tatiana Parfionova and Vika Gazinskaya.

RBTH: Have you ever considered launching the second, more democratic and affordable, line?

D.P.: Of course, we’ve considered that, but one should understand that this kind of line will require even more investments. Less expensive clothes must be produced in bigger quantities and, correspondingly, the number of people engaged in this cycle (production, trading spaces, etc.) increases several times as much. The assortment must be updated much more often. And to make all this cycle work, there must be much more investments. We understand that prices for our clothes are rather high, but we can’t work in a different mode now.

RBTH: Have you ever considered selling the NinaDonis brand? Have you got any proposals of that kind?

N.N.: We have had proposals of that kind. But these proposals were not based on a desire to develop this business, they were aimed at kind of self-promotion or satisfaction of some personal ambitions, for example, “I’m the owner of this and that.” Therefore, such proposals are not the ones that should be considered seriously.

D.P.:: Besides, very often such proposals lead to your losing the freedom of creative work. You are directed in your actions. And that kills the design. We want to continue our work and our desire to develop our business hasn’t disappeared, but now we are deciding on our plans and strategy for the future.