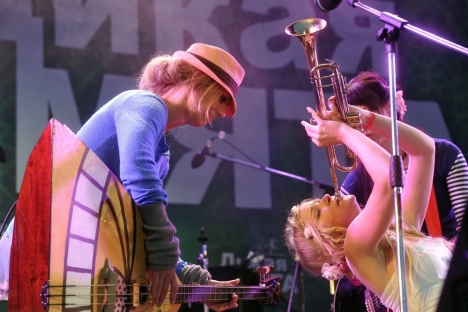 The fifth Wild Mint festival of world music gathered together more than 10,000 fans at the Ethnomir center in the Kaluga region.

Eventually, the snow does melt in Russia, and the arrival of spring brings open-air festivals. The unpredictability of the climate does complicate things a bit, but the hardy Russian spectator is not afraid. This year, the fifth annual Wild Mint summer festival of world music attracted more than 10,000 spectators despite the rain, hail, and generally un-summery weather.

For the fifth anniversary of Wild Mint, the festival was held a place that organizers believe best corresponds to the spirit of the event – the Ethnomir Cultural-Educational Center in the Kaluga Region. Perhaps the most unusual hotel complex in Russia, Ethnomir offers visitors the opportunity to spend the night in an ancient Ural hut, a yurt, or a tent, which are the traditional dwellings of the peoples of Siberia and the Far East. Guests can also meet representatives of native groups living in Russia, dance the dance of the reindeer herders, and savor traditional cuisine. Ethnomir also boasts the world's largest Russian stove, which can accommodate several people.

"Wild Mint" folk music festival from Russia Beyond The Headlines on Vimeo.

This year the weather put the “wild” in the festival's name. Only the Moldovan group Zdob si Zdub was able to perform in the sun. Others were forced to deal with rain and even hail. But even the poor conditions did not prevent Wild Mint participants from practicing Qi Gong and Pilates, learning how to make pottery or write Chinese calligraphy, or taste traditional dishes from around the world.

"We also have these festivals," said Monique, a Belgian yoga trainer, deftly bending her leg behind her head, "but in Russia it is quite different. Here things are really extreme: there was torrential rain on the second day, and the number of people did not diminish. When the sun comes out for a minute, people ran out to sunbathe."

After the rain subsided, celebrations under the open sky continued for three days. Only about a third of the guests had rubber boots, so the rest had to deal with the situation using the means at hand.

"It seems to me that when the Russians are in nature, they become kinder," said Frenchman Etienne, dancing in a pool with two plastic bags wrapped around his legs, "I am in my second year living in Moscow. I think that the city changes people: in the capital it is very important how you look. And here people could care less about external appearance."

Hosting the festival at Ethnomir allowed a wider range of people to experience Wild Mint.

"I live in a tent camp," said Lena, a journalist, "but, thanks to Ethnomir, people with children can stay in small hotels and cottages. This is a 'semi-urban' festival – it is possible to come for just one day, and unlike other open-air festivals, it is very close to the city."

The main idea of Wild Mint – and Ethnomir— is to show the general equality of cultures, regardless of their level of economic development and international status. Festival organizers hope that in coming years, Wild Mint will really become an "ethnic and cultural crossroads" in Russia.