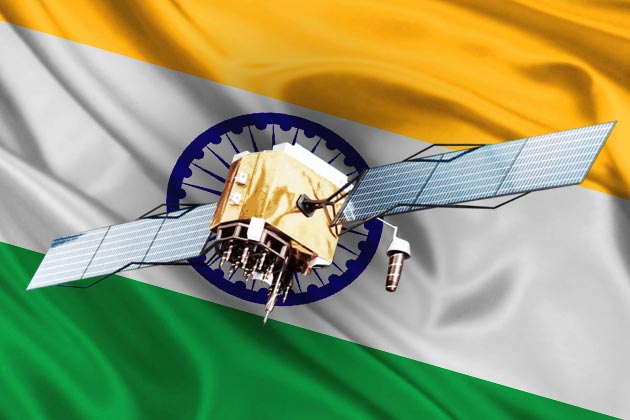 India becomes the fourth country whose naval forces include a satellite group.

India is preparing its first military satellite for launch. Once in its geostationary orbit, the satellite will carry out monitoring of the Earth's surface and provide communication functions in the interests of the Indian Navy. Thus, India becomes the fourth country whose naval forces include a satellite group.

The Indian Navy has always been one of the most powerful in the Asia-Pacific region. It only lacked a so-called “space component” to meet modern standards. And today the first element of this component is ready for launch scheduled for this month.

The new satellite’s tasks include observing the Earth's surface and ensuring uninterrupted satellite communication for the Indian Navy. It will provide sharp growth for the Indian Navy’s capabilities; the fleet will be able to exchange large amounts of information in real time. Theoretically, the launch of a military satellite may be the first phase in creating a full-fledged information network that will make it possible to coordinate actions of the whole fleet from one command post which provides remote targeting and target distribution. In order to create a full-fledged intelligence and information system, India also needs low-orbit satellites, patrol airplanes and unmanned aerial vehicles that could provide total coverage of the selected area. (For naval intelligence purposes, the Indian Navy is likely to buy the American P-8I aircraft. India is also going to increase the purchase of the Israeli drones Heron and Searcher Mark II).

Today only the US and NATO possess the complete set of relevant capabilities. Russia, Japan, and to a certain extent China have the potential to create such a system in a reasonable time. The launch of the Indian satellite means an expansion of the “elite club”, but it will take a lot of time for the Indian Navy to actually integrate these capabilities into its daily practice.

Placing the satellite into a geostationary orbit is an important task. Today, India does not possess a reliable enough carrier for its implementation. Theoretically, the placing into an orbit can be provided by means of a GSLV type missile, but the launchers’ statistics – four failures and one partial failure out of seven launches – cast doubt on the fact that the Indian military will trust the launch of their first satellite to an unreliable carrier.

So far there are no official reports about how, where, and by what means the satellite will be placed into orbit. There are not too many alternatives, and the Russian alternative seems to be the most probable. The geostationary orbit, in which a satellite takes a position strictly above the equator, provides additional benefits for India. In this case it provides virtually perfect conditions for observing the Indian Ocean, which is the Indian military’s main concern.

Preparations for the launch are not taking place in a vacuum; the Asia-Pacific region is becoming a scene of growing rivalry betweenthe great powers. In addition to the strengthening of China’s military and Indian progress in this sphere, the growth of Japanese potential and concentration of American forces in the region should be noted. By 2020, the US Navy is going to concentrate up to 60% of its battle ships, including six multi-purpose aircraft carrier battle groups, in the Asia-Pacific region.

It was just yesterday that the US began the re-targeting process in the Asia-Pacific region, and the change of priorities has been confirmed by organizational activities. For example, the disbandment of the US Navy 2nd fleet, historically responsible for the Atlantic theatre.

US Defense Secretary Leon Panetta has twice recently confirmed the intention to relocate the greater part of the US Navy to the Asia-Pacific region. This direction already enjoys priority in regards to the latest technical equipment. Practically half of all combat-ready F-22 fighter jets are concentrated in the Pacific Ocean. Bases in this region will be the first to receive F-35 aircraft, and it is to the US Navy’s Pacific Fleet that the new Gerald R. Ford aircraft carrier will be handed.

The US strategy is quite clear: they are increasing their strength in accordance to the growth of possibilities of their main geopolitical rival, and for now it is definitely China. Pursuing this strategy, the US is trying to rely on Beijing’s natural opponents. After Japan, South Korea, the Philippines, Australia and New Zealand, the US is trying to include both a somewhat aloof India and one-time enemy Vietnam in its strategy.

During his visit to India, Secretary Panetta said that India and the United States should conduct more regular and complex joint war games. Observers paid attention to the fact that this idea was expressed in New Delhi on the same day, when Russian President Vladimir Putin – who is in China on a state visit – called for the development of military cooperation with China.

Admittedly the United States have good chances for building an anti-Chinese coalition – traditionally Beijing is not too popular in the region. But there are two possible obstacles on this way. Tokyo historically does not enjoy the love of its neighbors either, and cooperation with India requires significant concessions in favor of this country, as well as taking its interests into account, because India is too serious a player for the role of a junior partner. The future launch of India’sfirst military satellite is yet more evidence of its ambitions and possibilities.