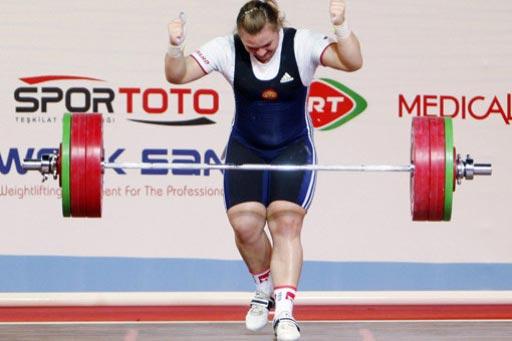 She knocked on the wrong door at the gym, and instead of going to a dance class she went into the weightlifting room.

The London Olympics are just around the corner, and one of Russia's youngest stars in weightlifting, Tatiana Kashirina, aims to clinch the country's maiden gold.

Weightlifting used to be very popular in the Soviet Union, and the names of Olympic and World champions were well known, around the country. Those halcyon days are over. Not only because the sport is no longer so popular, but also because of the many myths, prejudices and negative publicity surrounding weightlifting.

“Now, television broadcasts weightlifting only rarely. People don't know about the sport and believe false stories. Once a mother brought her son to me and said she wanted him to start weightlifting so he wouldn't grow very tall. It doesn't work like that,” says weightlifting coach Vladimir Krasnov.

Luckily, one of Russia's brightest stars in women's weightlifting, Tatiana Kashirina, didn't listen to all the stories, and put the burden of restoring the country to its place among the sport's heavyweights on her own shoulders.

It's hard to imagine that the woman, who can lift more than twice her own bodyweight, got involved in the sport by accident. She knocked on the wrong door at the gym, and instead of going to a dance class she went into the weightlifting room.

“I got into the sport by accident but I have never regretted it. Girls will be girls, even if our sport is weightlifting. I think that weightlifters have strong characters. Some women have a much stronger personality – that's what can scare men,” Kasirina says.

“It wasn't hard to discover her talent. When she first arrived in the gym you could clearly see her potential. At the age of twelve, she could lift the weights of amateur athletes. I have never heard of young weightlifters who could do that, anywhere in the world,” recalls Krasnov.

Russia has never won the Olympic gold in women's weightlifting since the sport was introduced in 2000. Four-time European champion and 2010 World champion Kashirina is just 21 years old, and it seems the athlete from the Moscow Region has plenty of time to claim the world's strongest woman title.

“I give lots of respect to all my opponents. There are always many good competitors. But I don't compete with them. I don't really care WHO they are. My main rival is a barbell, and my aim is to beat it,” says Kashirina.

Her results have become much heavier over the past two years, and she holds the world record of 148 kilograms in the snatch. However, due to the strength of the Chinese and South Korean rivals even this weight might not be enough for the gold in London.