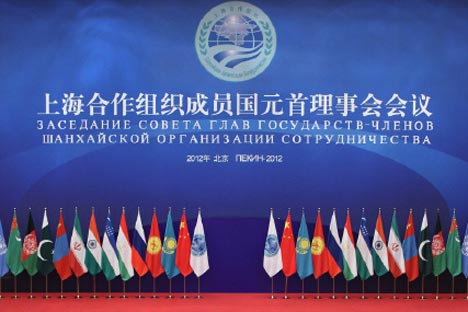 The 12th SCO summit in Beijing saw India seeking a bigger role and Afghanistan inching to the centre of the regional body's agenda.

The leaders of the six-nation Shanghai Cooperation Organization ended their 12thsummit in Beijing June 7 on an upbeat note, with an ambitious multifarious mid-term plan mapping the mid-term future of this influential organization over the next decade. The summit unveiled a host of new initiatives, including a SCO Development Bank and a revised counter-terror strategy, that are set to reinforce the grouping’s growing stature as a preeminent platform for enhancing regional economic and security cooperation.

The summit culminated in the signing of ten pacts, with an all-encompassing declaration on “Building a Region with Lasting Peace and Common Prosperity,” as its showpiece. The member states also cleared a revised SCO strategy for prompt response to events jeopardizing regional peace, security and stability.

The expansion of the grouping loomed large on the agenda of the two-day summit, with the SCO granting Afghanistan an observer status and accepting Turkey as a dialogue partner. However, the observers like India wanting to get inside the SCO tent will have to wait for some more time as the procedures for admitting new members are elaborate and ponderous. It’s only at the next summit in Bishkek that the leaders of SCO countries will formally kickstart the process of admitting new members. At the summit, India’s External Affairs Minister S.M. Krishna made a strong pitch for “larger and more constructive role” in the SCO as a full-fledged member and highlighted myriad strengths it could bring to this Central Asia-focused grouping. Russia has vigorously backed India’s full membership of the SCO and feels that India’s presence could be a game-changer for the SCO. China has welcomed New Delhi’s likely inclusion in principle, but made it clear that the prospective members will have to work harder to get in. However, India is now only looking at 2014 as the target year for getting inside this influential body as a full-fledged member.

Besides economic and strategic issues, the Beijing summit saw Afghanistan climbing on top of the agenda. Kabul, a long-time special invitee, was upgraded to the status of an observer, giving the grouping an enhanced role in stabilizing the country in the run-up to the withdrawal of the US-led international troops in 2014 and beyond. Nearly every leader of the SCO member countries and observers mentioned Afghanistan and voiced concerns about the fragile security situation in that country.  Chinese President Hu Jintao held separate bilateral talks with Afghan President Hamid Karzai, who has been attending the SCO summits as an invitee since 2004, and firmed up strategic partnership with that country. In his speech, Karzai sought more funds from the SCO and exhorted the SCO leaders to be proactively involved in bolstering security and economic reconstruction of his country. These trends indicate that China and Russia, the big two of the SCO, will push for a greater SCO role in Afghanistan. Informed sources say that given the critical importance of a stable Afghanistan to the country, Kabul could be admitted as a member of the SCO along with India and Pakistan when the SCO expands. The SCO’s greater proactive involvement in Afghanistan could be a game-changer as it provides an alternative regional platform for stabilsing Afghanistan after the Nato-led troops leave in 2014.

India, which has enormous stakes in a violence-free Afghanistan, has welcomed the SCO’s role. Speaking at the plenary of the summit, India’s External foreign minister described Afghanistan as the “most important security challenge” and underscored that the SCO “provides a promising alternative regional platform to discuss the rapidly changing Afghan situation.”

The dangerous mix of Islamist militant networks and narcotics trade in the region that directly impinges on the stability of Afghanistan is a key factor driving India’s desire to seek an upgrade as a full member in the SCO. India is also looking to join the counter-terror mechanisms of the SCO. India has already opened dialogue with the Regional Anti-Terrorism Structure (RATS), the SCO's premier counter-terror body, and feels that the SCO provides another powerful platform for boosting greater regional cooperation in combating terrorism.

In this context, Russia and India, which partnered along with Iran in the Northern Alliance that played a key role in the overthrow of the Taliban regime in 2001, share similar concerns. Russian President Vladimir Putin met Karzai in Beijing and offered greater security and economic assistance in the reconstruction of Afghanistan, the hub of opium trade, the raw material of heroin, which has spawned an epidemic of drug addiction in Russia.

China, on its part, is also set to be more proactive on Afghanistan. Chinese President Hu Jintao told the official People’s Daily in an interview that China “will continue to manage regional affairs by ourselves, be on guard against external turbulence and play a bigger role in Afghanistan’s peaceful reconstruction.”

As the grouping enters the second decade amid a mutating international order, the SCO is also in the midst of a raging debate about its character and role in world affairs. In the context of Afghanistan, Chinese officials and state media are at pains to allay the West’s worries about the SCO becoming a “Nato of the East.” The Beijing summit also saw Russia and China joining hands to oppose military intervention in Syria and underlined that the use of force against Iran was “unacceptable.” The admission of Turkey, a Nato country friendly to the West, however, is aimed at sending the message across that the SCO is not an anti-West grouping, but is driven primarily by imperatives of security and economic integration.  As the SCO evolves, the world will be watching how its expansion will affect the regional grouping which aspires to provide a counterpoint to the West-dictated narratives and discourse on leading international issues.