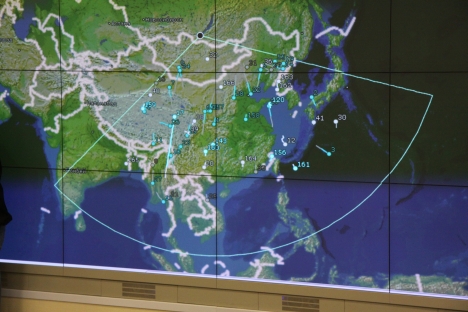 New radar systems are being put in place in Siberia and the Russian Far East to monitor the Pacific Rim.

Earlier, Russia installed the Voronezh-M early warning radar in Lekhtusi near St. Petersburg, the Voronezh-DM near Armavir in the Krasnodar Region and one more Voronezh-DM in the exclave region of Kaliningrad. These three form a sort of an anti-missile arc to monitor missile-threat directions and work together with the operating early warning radars: Daryal, Dnepr, Dnestr and Volga in Olenegorsk (Murmansk region), Pechora (the Komi Republic), Gantsevichi (Belarus), Gabala (Azerbaijan), on Lake Balkhash (Kazakhstan), in Usolye-Sibirskoe and Yeniseisk in the Krasnodar region.

New Voronezh-M and Voronezh-DM radars are planned for other regions of the country as well.

The military has made no secret of the fact that these radars are a response to U.S. and NATO plans to establish missile defense in Eastern Europe. Lieutenant General Oleg Ostapenko, Commander-in-Chief of the Russian Space Forces, said radars of this kind “are employed as elements of the nuclear deterrence system. It is only natural that each new radar put into duty is an additional reason for the concerned parties [the U.S. and NATO] to think about their actions.”

The new radar located near Irkutsk monitors an area with a radius of 3,700 miles covering a 120-degree arc. Its field of vision includes Japan, China, both Koreas, Vietnam, the Bay of Bengal and most of India. And this is only the first component of the radar unit; a second one is projected to be launched in six months to monitor an area with the same range and the same arc, but also covering the central and northern parts of the Pacific, including the west coast of the U.S.

All missile launches in this area will be detected by space monitoring system satellites, and launch information will be received by the early warning radars. The computer will calculate the trajectory of the missile and its target, and transmit the data to the Moscow-based central control of the space forces in Solnechnogorsk. The launch will be reported to the president and, following his orders, the central control will respond appropriately. If the incoming missile threatens the country and its population, it may be intercepted; the control center may also opt for a retaliatory strike or retaliatory counter-strike. All of this must be decided in a matter of minutes. The military believes that if a potential enemy is aware of Russia’s capability, it is unlikely to make such a reckless move as launching a missile.

The Voronezh-M radar is a key element of this system. It is capable of detecting and identifying modern and advanced threats and acts as an instrument of deterrence preventing missile attacks and increasing the effectiveness of retaliation. Along with the space monitoring system satellites, it is capable of detecting launches of strategic ballistic missiles, intermediate range missiles, short-range missiles, cruise missiles and various aircraft ranging from strategic bomber to fighters.

Viewed at close range, the Voronezh-M radar unit looks like a football field standing on its end at an angle of 75 degrees to the horizon. It has 1,566 radio transmitters or transmitter-receivers. Compared to previous models, it has enhanced functionality and is much cheaper.

“Unlike the previous-generation radars Dnepr and Daryal, the new radar unit does not include a plant to make distilled water for cooling the transmitters; they are cooled by wind instead. Also, the new unit requires much fewer personnel to run it,” said Sergei Boev, director general of the Radiotechnical and Informational Systems company.

Old radar systems that use such cooling plants will be phased out and as soon as new units have been ready for combat duty, according to Boev.

“Russia does not have plans to deploy new radars abroad,” said Ostapenko. “The track record of our relations with Ukraine concerning the Mukachevo station and the one near Sevastopol, with Azerbaijan concerning Gabala, and minor problems with the radar on Lake Balkhash require us to rely on our own resources and territory.”