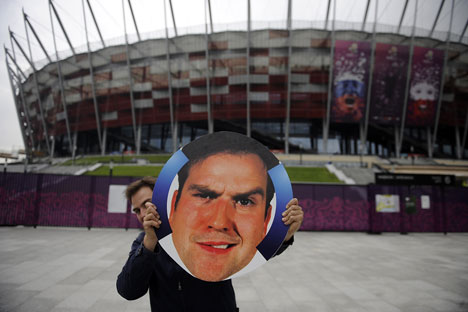 On the way to Sulejowek, where the Russian national team’s training camp is located, I noticed gloomy signs saying “Sklep” (which sounds exactly like the Russian word for “tomb”) and arrows pointing to the stadium. It turned out that “Sklep” just means “store” in Polish. We were luckier with the name of the stadium; “Victoria,” which was hosting the first open practice of the Russian national team.  The practice session lasted about 90 minutes – the players jogged first, worked out a bit, then went on to pass and move in squares, followed by a few physical drills and quick bursts with the ball, and finishing with two parallel games.

Since Russia destroyed Italy in a pre-Euro 2012 game the team has earned more respect. A vendor of the Polish national team’s merchandise in the historical part of Warsaw shakes his head skeptically when asked about his team’s chances against Russia and it seems this game will be pivotal for Poland. Even the central stadium features giant posters of a man and woman painted in the colors of Russia and Poland’s national flags, although it would be logical to use Greece instead, as Poland play the opening game of the tournament against Greece.

Fans also seem to enjoy special attention. There used to be a legislative ban on Soviet symbols here, but the ban was lifted. However, it obviously remains in Poles’ minds, which is understandable given the history of relations between our countries, the pacts, the Katyn massacre, Tukhachevsky and Piłsudski, etc. A fan warns that you won’t make it more than 100 meters in Warsaw if you are wearing a T-shirt with a hammer and sickle on it, although he adds that all the girls in the capital city will admire your bravery for the entire 100-meters.

Info: On the 4th of June Poland celebrated the anniversary of the vote that determined the country’s national identity – in the election on 4 June 1989, the non-communist Solidarność party won 99% of all Senate seats and 35% of Sejm seats. Poland became the first formerly socialist country where civil society had the opportunity to effectively manage the state.