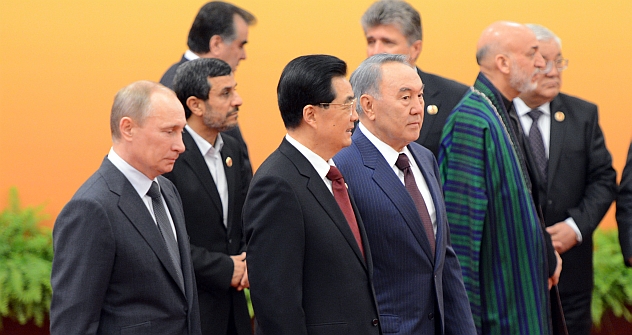 The leaders of the Shanghai Cooperation Organization at the 2012 summit in Beijing. Source: Reuters

Like NATO a few weeks earlier, the SCO focuses on the country’s future.

Like the NATO summit held in mid-May in Chicago, the recent summit of the Shanghai Cooperation Organization (SCO) summit in Beijing was dominated by the issue of Afghanistan. While NATO and its allies were discussing a plan of action for after the withdrawal of NATO forces from the country in 2014, however, the SCO focused on Afghanistan’s long-term future. The SCO put its relations with Kabul on the fast track by granting Afghanistan observer status. It joins India, Iran, Pakistan, Mongolia and Turkmenistan in this category. The permanent members of the SCO are  China, Kazakhstan, Kyrgyzstan, Russia, Tajikistan and Uzbekistan.

The fact that Afghanistan is being drawn into the SCO at this point in time is significant. Several years ago, the SCO encouraged Afghanistan to apply for observer status, but Kabul was reluctant, worried how membership in an organization dominated by Moscow and Beijing would affect relations with Washington.

But last year, when the format of future relations with the United States became clear, Afghan President Hamid Karzai finally agreed to negotiate with the SCO. From the Afghan perspective, closer relations with the SCO hold the promise of financial benefits and political support from the eastern powers. One proof of this was the recent report from the Afghan foreign ministry that Beijing and Kabul are planning to announce that relations “have reached a new strategic level.”

Speaking to the Chinese newspaper Renmin Ribao, Chinese leader Hu Jintao said:   “We will continue to solve regional issues independently, protecting ourselves from upheavals caused by instability outside the region and will play a more serious role in promoting the peace process in Afghanistan. We will intensify communication, coordination and cooperation in addressing important international and regional problems.”

Afghanistan’s promotion to observer status was also notable because Iran was once again denied that rank. Iranian President Mahmoud Ahmadinejad, who has for many years been trying to become a full-fledged member of the Shanghai club, was reminded again that under the rules of admission to the SCO, countries under UN sanctions cannot become new members.

As a consolation, however, Ahmadinejad had a series of bilateral meetings with SCO leaders, including Russian President Vladimir Putin. According to the Russian president’s foreign policy adviser Yury Ushakov, the talk with Ahmadinejad was in preparation for the multilateral talks on Iran to be held in Moscow on  June 18-19. “We will persistently, aggressively promote the thought that Iran’s right to develop peaceful energy under the oversight of the International Atomic Energy Agency should be approved,” Ushakov said.