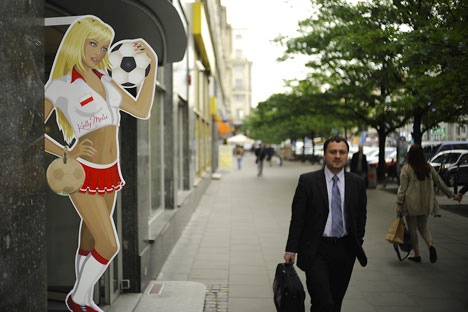 The Polish Ambassador to Russia Wojciech Zajączkowski confirmed during a press conference marking the start of the European Championship that the Polish Criminal Code contains no ban on the use of Soviet symbols. There used to be one, but it was abolished on 11 July 2011 by the Polish Constitutional Tribunal. So there will be no legal problems if some fans wear shirts with the hammer and sickle on them.

However, these symbols are not only associated with sports, but also have historical and political significance. One should remember that these symbols might be met with disapproval by locals. It all depends on why you use these symbols; together with Communist slogans and in a clearly political context they would be perceived differently, even from a legal point of view. This issue was frequently discussed in Poland before Euro-2012 and the arrival of foreign visitors.

We decided to test the attitudes of the locals and visited a hair salon that offers a new service - you can get a crew cut and have it dyed to look like a football or your country's national flag. My colleague chose the "light" option, getting our flag's colors and the word "Russia" on the back of his head. After the procedure, the entire salon applauded us.

Twenty meters from the hair salon,  guy dressed in the colors of the Polish team ran up to us and started beckoning us away from the busy street, saying in poor Russian that his Russian friends wanted to meet us. Then he saw the two Caucasians not far from us, suddenly changed his mind and disappeared. The two Caucasian guys, Timur and Azamat, appeared to be from Dagestan. They moved to Poland with their parents eight years ago. Now they both work at a construction site and supplement their income by taking part in wrestling events. They praise Poland, saying life here is peaceful and comfortable.

When we were ready to say goodbye our two new friends decided to walk us to the car... just in case.