Democracy in action or shashlik? 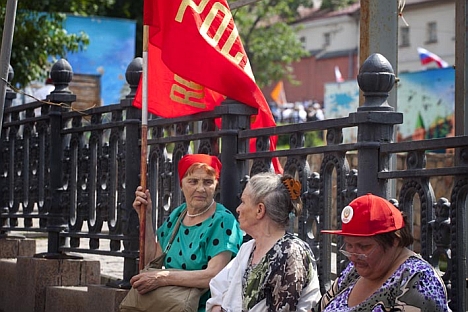 Before the most recent protest, Jennifer Eremeeva and her husband faced a dilemma: whether to join the protesters or go for a tasty barbeque in the country.

The news from Russia lately has hardly been encouraging, but British Petroleum pulling out of their landmark joint venture with TNK has about it more than a hint of rats deserting the sinking ship. Can we blame them? BP has had its share of global trouble in recent years, but managing an oil company with four headstrong Russian billionaires might, at times, have made cleaning up an oil spill seem like rinsing a few tea cups in comparison.

Bad news is great fodder for the anti-Putin protesters who geared up for another assault on the Kremlin during the long holiday weekend in June. Since I missed May’s barricade event, “Literary Stroll,” I am anxious to go to the June event, which has been dubbed “Russia Day. Without Putin.” HRH – my “Handsome (although maybe here “Hesitant” is more appropriate) Russian Husband,” is anxious, I’m not.

“You’ll get arrested,” he warns.

“Gosh, I hope so!” I gush, picturing myself catapulted onto Katie Couric’s couch looking exactly like Nicole Kidman in “Hemingway & Gellhorn,” dusty camera bag slung over one shoulder.

“I would seriously rather spend three nights in a Russian jail than one at the Potapovs’ dacha,” I say firmly.

“It’s dangerous,” he says, continues, “the government plans to really crack down and the fees for unlawful assembly are going up to $300,000. We can’t afford it.”

“No,” says HRH, “I don’t want to be a part of it. I just want to get out of the city for a long weekend and have some shashlik. And what’s going on is not a revolution…it’s just a PR stunt, and not a very successful one at that.”

As revolutions go, this one is a bit two-dimensional. This could be because most of the action takes place on Facebook and Twitter, with only once-a-month real time clashes between protestors and police. Since the real time clashes aren’t covered on Russian TV and HRH refuses to acknowledge any form of social media, it’s easy to see why he might not feel a sense of urgency about the protest movement Occupy.

If  I were in charge, I might have thought twice about putting socialite Xenia Sobchak in such a prominent leadership role. I might also have put a little more thought into the top heavy name of the go-to Facebook fan page: “We were at Swamp Square and We Will Be There Again,” (27,462 Likes). Swamp, when used in a revolutionary slogan is unfortunate, as I suspect the Kremlin crowd foresaw when they moved the initial protest from “Revolution Square” to “Swamp Square” back in December. It lacks the pith and punch of “Liberte, Fraternite, Egalite,” or “All Power to the Soviets!”

Nevertheless, I’m determined not to miss “Russia Day. Without Putin.” Even though that phrase also seems awkward somehow. Sort of like TNK without BP.