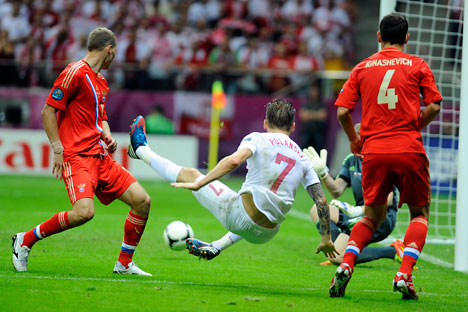 The Russia - Poland match finished in a draw, leaving Group A finely poised ahead of the final round of games.

A fiercely-struck equalizer from Jakub Blaszczykowski gave Poland their reward for a battling display in a 1-1 draw with Russia that showcased flowing, end-to-end football.

Defeat would have left the Euro 2012 co-hosts needing a win against the Czechs and some luck on Saturday to reach the quarterfinals, but a draw leaves Group A finely poised ahead of the final round of games.

Russia go into their match with Greece as the group leaders on four points, followed by the Czechs on three, Poland on two and Greece with a solitary point.

The match was played in a tense atmosphere after clashes before the game involving Russian and Polish fans saw at least 100 people arrested, Warsaw police said.

Alan Dzagoev, Russia’s two-goal hero in their opening win over the Czechs, darted forward to knock in Andrei Arshavin’s corner and put Russia ahead on 37 minutes.

The diminutive midfielder from North Ossetia lost his marker and appeared to deflect the ball in at the far post with his shoulder.

Poland striker Robert Blaszczykowski evened the scores on 57 minutes, cutting inside from the right as the Russian defense backed off before unleashing a powerful, curling left-foot effort that left the outstreched Vyacheslav Malafeev with no chance.

Both teams started aggressively, with Russia striker Alexander Kerzhakov pulling the Polish defense out of position but failing to develop any chances without falling foul of the offside trap.

The Poles started slowly but gained confidence after defender Sebastian Boenisch forced an unconvincing save from Malafeev on seven minutes with a header from Ludovic Obraniak’s free kick.

Four minutes later, Robert Lewandowski, Poland’s goalscorer in the 1-1 draw against Greece on Friday, flicked the ball up before firing in a volley from the edge of the area, but he missed the target.

Eugen Polanski hit the back of Malafeev’s net with a calm finish on 15 minutes after a neat Polish passing move, but he was two yards offside when he picked up the ball and the goal was disallowed.

Headed chances for Russia forward Alexander Kerzhakov and Poland defender Marcin Wasilewski yielded little, before Kerzhakov’s cross on 27 minutes sliced open the Polish defense, but Arshavin was unable to tap it in.

After Dzagoev’s opener, Poland pushed for an equalizer but saw Blaszczykowski’s powerful effort parried by Malafeev.

Early in the second half, Poland created a good chance for Lewandowski on the counter, but his charge was stopped by a brave punch from Malafeev.

Poland’s Przemyslaw Tyton, in for the suspended Wojciech Szczesny, had little difficulty saving from Dzagoev on 67 minutes after a good Russian move.

A minute later, the same was true for Malafeev stopping Polanski’s close-range shot from a wide angle.

The pace of the game slowed slightly, but that did not stop Lewandowski setting up Obraniak on 80 minutes, although the Bordeaux midfielder’s low shot lacked the power and accuracy to really test Malafeev.

The final Group A games on Sunday see Russia face Greece, while Poland take on the Czechs, with the winner of that game certain to qualify.