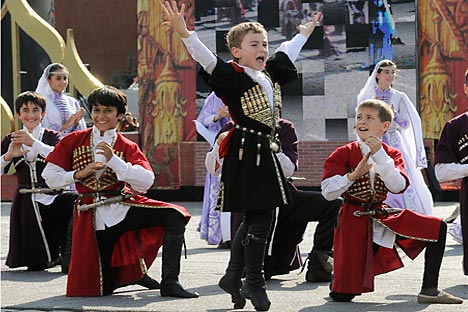 Despite an overwhelming Slavic majority, Russia is diverse ethnically and culturally. Source: ITAR-TASS

With as many as 160 distinct ethnic groups and indigenous peoples, Russia is a land of incredible diversity. Yet in the face of an overwhelming and at times hostile Slavic majority of 80 percent, how can these disparate peoples hope to retain their cultural identity?

The term “Lezgian” is familiar to many Russians as a style of folk dancing with origins in the Caucasus republics of southern Russia. Yet considerably fewer are aware that the name actually extends to a whole people with ancient origins. The Lezgians, of whom there are currently some 800,000, trace their history back over a thousand years. While many live in Azerbaijan, the majority live in Dagestan, Russia's southernmost republic.

Last month the Moscow-based Lezgian community in cooperation with the social project “Face to Face” organized a “lunch with the Lezgians,” to celebrate and showcase their unique culture and history.

The chosen location for the event was a cafe with the curious name of “The Prancing Dreadnought.” Although the venue was not a small one, it was clearly struggling to accommodate what was proving to be an unexpectedly large number of guests. Yet the resultant discomfort was far from being a cause for concern. Throughout the afternoon the turnout was frequently commented on with pride by our hosts, and gave a noticeable boost to their spirits and confidence.

“All that is necessary is for people to listen,” said the founder of “Face to Face” Bella Shakhmirza. “When given a willing audience, ethnic minorities can talk endlessly about their culture.” Thus the proceedings were opened by a Lezgian anthropologist, who enlightened the audience with a short lecture on the historical roots of his people.

Fittingly this lecture about ancient ancestors was followed by a performance by the very youngest members of the Lezgian community, who took to the stage to demonstrate their well-known folk dance. The music to which they danced, positing Lezgian melodies over a backing track of sterile European style house music, was a seemingly unintentional reminder of the difficulties indigenous cultures face from westernization.

It was reassuring to hear, after the children had finally been coaxed into relinquishing the stage, that the next item was to be a concert of Caucasian folk melodies played on a traditional woodwind instrument known as the “duduk.” Guests and hosts alike fell into a profound silence during this performance, which demonstrated the spirit of this ancient and historically unique people.

Of course no sampling of a foreign culture is complete without a taste of its cuisine, and this gathering was no different. Our hosts invited us to learn the art of preparing the traditional Lezgian dish of “Afarar.” The dish, which somewhat resembles a Mexican quesadilla, is made from a thin pastry filled with cottage cheese. It was simple yet delicious, and followed soon after by a course of Khinkali, which is well-known in Moscow as the dumpling-like dish that is eaten throughout the Caucasus.

After the meeting drew to a close, I had time to digest both literally and figuratively the contents of the afternoon. My acquaintance with Moscow's Lezgian community had been fascinating, opening my eyes to a previously unfamiliar link in the diverse web of ethnicity that constitutes Russian society. Yet certain reflections were more disquieting.

One cause for anxiety was the encroaching westernization that I had noticed in the “Lezgian” pop music our hosts had played. Helene, a French student of linguistics at the Moscow State University who also attended the event, shared this anxiety. “When I was little, I fell in love with the unique sound of Caucasian languages,” she said. “Now I study those languages but, having been to the Caucasus, I fear that some cultures there are losing the wealth of their traditions.”

Bella Shakmirza, who is herself of the minority Noghai ethnicity, shed further light on this: “In Russia there is a great variety of different ethnicities and cultures, but we learn only European languages and take our holidays in Turkey and Egypt. This leads to a restricted understanding of our country, which is limited solely to the distinctions of 'Slavic' and 'non-Slavic'. Ancient peoples like the Lezgians are condemned to the status of invisible ethnicities,” Shakmirza said.

Lumping all the non-Slavic ethnicities in together also plays into the “us and them” mentality of Russian nationalists, feeding the tension between Russians and other ethnic groups in Russian society. According to the research of academics at the European Social Survey cited last year by Russian sociologist Antonina Noskova, in a comparative analysis of 23 European countries, Russia ranks in last place for racial tolerance. While Moscow streets have in recent times been relatively free of racially motivated violence, memories of the nationalist riots that shook Moscow and other Russian cities in December 2010 still linger.

As with the challenge of multiculturalism in Europe, the key to peaceful coexistence in Russia lies in an integration that brings different ethnic groups into close and productive contact with each other while preserving their unique cultural identities.  Our afternoon with the Lezgians, where representatives of about twenty different ethnicities were numbered amongst the guests, demonstrated very effectively that such an integration is possible.  Shakmirza created her project Face to Face in the hope of encouraging this process.

At Face to Face events, representatives from different communities are approached with the offer of giving a lecture about their culture. At the lecture, as at the event I had attended, academics speak of history and culture, performances of traditional music and dancing are given, national dishes are prepared and eaten together, and workshops are held in which the hosts teach all these cultural practices to their guests. Participation is free and open to all.

Face to Face has already held meetings in Moscow, St Petersburg, Samara, and even as far afield as Italy. Shakhmirza dreams of extending the project's reach by renting space in Moscow for a permanent meeting ground. Currently financial restraints prevent the realization of this plan; since its creation the organization has had to rely entirely on local communities for funding.

In order for Russia to avoid the danger of racial conflict, and realize the potential that lies in its ethnic diversity, two processes need to take place in parallel. First, on a grass-roots level, Russian citizens need to employ their own initiative to create more associations like Face to Face. Secondly, the government needs to allocate resources to these projects without interfering in their organization.

The results of such efforts would be a great blessing not only for Russia's invisible ethnicities, but also for the Slavic majority.