Moving the action from the classics to the present 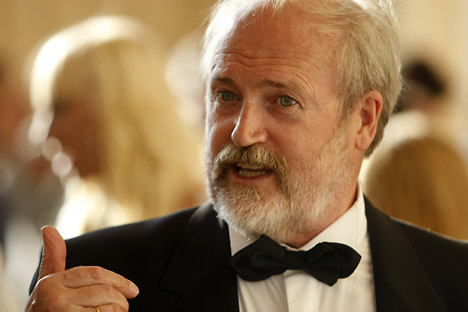 Russian director Vladimir Khotinenko: "Right now there is a trend in film: to move the action of classics from its time to the present day, since history repeats itself ... . It will be repeated and repeated: we enter and exit the same state." Source

Born in a small town in the Altai mountains, Russian director Vladimir Khotinenko originally worked as an architect, but eventually he felt drawn to work describe “the architecture of the human soul.”

Khotinenko spoke with Stefania Zini of Russia Beyond the Headlines about classic authors, Russian cinema, and his mentor, actor and director Nikita Mikhailov.

Russia Beyond the Headlines: You were first educated as an architect. How did you suddenly find yourself in film?

Vladimir Khotinenko: In 1976, I graduated from the Institute of Architecture and then suddenly, as you noticed, I realized that all my illusions about architecture, which I wanted to work in, were destroyed by the Soviet reality: the dreary, gray five-story buildings, the panel 12-story “skyscrapers…”

I didn’t know what to do so I joined the army, to think and decide what to do next. I was a showpiece in the recruiting office. Everyone tried to dodge the army, especially after college, but I joined on purpose. Although then I drew, wrote stories.

After six months of service I was given leave in Sverdlovsk, where I had graduated from college. By coincidence, Nikita Mikhalkov – already known across the Soviet Union – had come there to meet with creative young people, and a friend of mine almost dragged me by force to this meeting. And we suddenly got to talking with Mikhalkov.

He left me his telephone numbers and when I finished my service and came to Moscow six months later, we got together. He was signing up students for a degree two-year course for screenwriters-directors, where, by the way, I now teach. This was the golden dream for all future filmmakers, getting into his course. I got in and then completed his workshop.

So that’s the author of my fate - Nikita Mikhalkov. Later I worked as an assistant for him on Oblomov. Without him, I have no idea how it would have all worked out.

RBTH: Your recent work is on Feodor Dostoevsky. After the mini-series Dostoevsky, you’re now working on Demons. What drew you to this author?

V.K.: You know, I wasn’t drawn. It was just fate. The TV channel Rossiya 1 proposed. I shoot it and I agreed, despite the fact that I always said I had nothing to add to the classical works.

I reread all of Dostoevsky and rediscovered him for myself. Filming of Demons should begin in the fall. Right now we’re working on the script.

RBTH: Will the action of Demons be set in its time?

V.K.: I can reveal the secret. I want to shift it a little, bring it a bit closer to now. Right now there is a trend in film: to move the action of classics from its time to the present day, since history repeats itself – especially what’s in Demons. It will be repeated and repeated: we enter and exit the same state.

Shifting the time of action is a really fashionable trend, especially in opera, where simply everything is moved to the present. I do not support updating because I think there’s no need to improve what’s already there. You just need to understand it and try to translate it into another language.

In Demons I shift the action a bit in texture to remove the kind of archaism of the environment, rather than the content. For easier comprehension, perhaps the language will be a little less archaic, but in any case I won’t move the action to the present, otherwise we’d have to completely change the language and the system of relationships. So why would you need that? You’d be better off just going and writing a new story.

RBTH:Which of your films have left you most satisfied with yourself?

V.K.: The first impression that I got what I wanted was when I shot Mirror for a Hero 25 years ago. Then it was the film Roy. Overall, everything that’s in the past—those are grown children. Now I love Dostoevsky.

RBTH: Is there a film you haven’t yet made, but would like to?

V.K.: At one time, my friend Valery Zolotukha wrote a screenplay, The Great Campaign for the Liberation of India. It’s a fictional story but done as if it really happened. The script was written a long time ago, in 1995–1996, but it’s not at all outdated. History passed on top of time. There’s a wonderful model of our country there, fantastical but real: the fantasy element helps to see it.

In general I’ve had a strange destiny unfold. I don’t have time to come up with something myself, as there are suggestions appearing. Cinema life is grim - you can dream about anything, but if you don’t have money, your dreams will remain modest dreams.

Destiny has thrown me plots in strange ways. One, for example, I found on a plane. There was a magazine in the front seat pocket. I began leafing through it and saw this scene: a black dog that had escaped its owner creeping toward a blinded bear and starting to lick its eyes. It’s a story of how animals that are supposed to be enemies become friends, I was very shocked. I shot this scene for the film Roy.

I call this “hearing the sounds of destiny.”