Why Bobby Jindal wants to be white 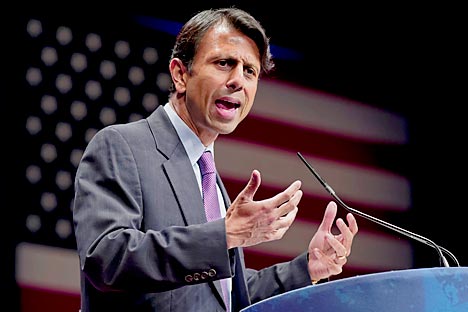 The Louisiana governor says US president Barrack Obama is incompetent and cowardly. Perhaps Jindal should fess up to his own cowardliness.

Bobby Jindal has a unique problem. He wants to be white. But because a full skin transplant is not a possibility, Jindal, the governor of Louisiana, America’s poorest state, has gone to great lengths to attain honorary white status. This he has achieved by becoming even more conservative than the lily white Republican Party. However, as a brown convert to ultra right wing Republicanism, Jindal, the son of Indian-born parents, feels he has to constantly reaffirm his hard-won white status. This he does by mouthing off Bible Belt inanities, which no doubt reassures his southern voters and party bosses that they made the right choice in picking him.

He called Obama “the most liberal, most incompetent president in the White House since Jimmy Carter”, and accused the US president of cowardice for deciding to keep away from a recent recall election.

Coming from a man who governs a state that has been described as “half under water, half under indictment”, that’s rich.

You have to understand where he is coming from. At first glance, the governor seems like any other high-achieving Indian American immigrant. But look closer and you’ll realise he’s different – in a Sarah Palin creepy kind of way.

Here’s a quick quiz. If your mother is a nuclear physicist, your father is a civil engineer, and you have a biology degree from Brown University, what are the chances of you becoming a card carrying creationist? Answer: smaller than small. But if you are Bobby Jindal, then the equation changes.

In a state known for deep-rooted, Third World style corruption, Jindal has been described as highly ethical. But a better insight into his personality can be got from observing how he views his own ethnicity, what he feels about his parents’ culture and his country of origin, and his obsessive desire to be accepted as a white American in the Republican Party.

Murder? Not my problem

Flashback to March 2008. A series of unexplained deaths of Indian medical and engineering students culminated in the brutal murders of two Indian PhD scholars at Louisiana State University.

In the immediate aftermath of the university attacks, repeated calls were placed to the newly elected governor by Indians demanding a thorough probe. But strangely Jindal, who had campaigned vigorously on a platform to crack down on crime, did nothing. Finally, after nearly a week of silence, he released a tepid statement through a low level secretary, expressing his condolences and confidence in local law enforcement in bringing the culprits to justice.

What was his problem? According to Jindal camp insiders, the governor didn’t want to make a direct statement about the murdered students – let alone visit the campus – because he did not want to risk being tarred by the minority brush.

Minorities? The murder victims were not green card grabbers; they were students, and one of them was a brilliant doctor who planned to build a hospital back home after his training at the university.

But then Jindal has a consistent record of airbrushing anything that clashes with the image he wants to project to the white Republican voter base.

Take the July 2009 interview with Morley Safer of 60 Minutes on CBS, where both Jindal and his wife Supriya gloss over their ethnicity. Safer asks if their family maintains any of the Indian traditions, and the Jindals look at each other as if they've been asked if they are hiding illegal aliens in their basement.

Supriya tells Safer: “Not too many.” “No, they've been here for so many years that…,” pipes in Jindal. “We’ve sort of adapted. And we were raised as Americans, you know? We were raised as Louisianans. So, that's how we live our lives,” Supriya says with practised ease, but still comes across as unconvincing. Morley Safer voices over: This oyster and crawfish-eating Louisianan tends to downplay his ethnic background. “When we sent a reporter and photographer to India to write about his family and their origins, the Jindal family was very queasy about that undertaking,” says the editor of the New Orleans Times Picayune, Jim Amoss.

This at a time when the US President calls himself Barrack rather than Barry and openly talks about his Kenyan roots. Also, Obama despite ruling over a country built largely by British immigrants has never tried to hide his dislike of the British for their genocide in Kenya. (He reportedly packed off to the British embassy a bust of Winston Churchill kept in the Oval Office since the 1950s.) So who’s the coward here?

Jindal’s disingenuousness drags on. Asked if he felt any racial tension growing up in Baton Rouge, Jindal tells Safer, “Not at all. You know, this has been a great place to grow up. The great thing about the people of Louisiana is that they accept you based on who you are.”

Who is he fooling? As Safer says, “That’s quite a declaration in a state that not so long ago gave former Ku Klux Klansman David Duke nearly 40 percent of the vote. But that sunny, ‘Leave it to Beaver’ optimism is classic Bobby Jindal, a man so determined to be true blue American, he changed his name.”

This sets up another Jindalism. Safer asks him if he was born “Paiyoosh”. Jindal (born Piyush) answers in the affirmative with a straight face, not bothering to correct the CBS journalist that the right way to pronounce his former name is Peeyoosh.

But from where Jindal comes from, that would be like signing his death warrant. He wants Safer to quickly move away from his ethnicity; he doesn't venture into that territory any longer.

And that’s typical Jindal. His jettisoning of his liberal Indian ethos and conversion to the redneck religion of rustbelt America at an extremely young age is a clear sign of a person who thinks far ahead and thinks with cold logic.

Culture critic and opinion writer Jimi Izrael feels Jindal isn’t an Indian American who just wants to be seen as an American; Jindal is an Indian American who wants to be white. “Embracing difference makes white folks nervous: any brown person who aspires to assimilating will get high marks. He channels a certain brand of sincere self-loathing heretofore only seen in golf caddies and Larry Elder,” he says. (Larry Elder is a black guy who trashes black guys and thinks he’s white. He is the author of the book Stupid Black Men. Incidentally, like Jindal, he studied at Brown University.)

Americans, especially of the Republican variety, are projecting Jindal as their Great Beige Hope. Arch-racist and right wing talk show host Rush Limbaugh is so enamoured of him that he calls Jindal the next Ronald Reagan. But while Reagan’s appeal cut across party lines, Jindal is a highly polarising figure. He is at his core an opportunist who appeals to baser American instincts. Despite coming from an Ivy League family, he wants creationism taught in schools, and stop stem cell research. His mantra is “God Bless America and No Place Else”.

This is the second election year Jindal’s name has been suggested for vice president. From there, the office of the president is just a step – or heartbeat – away. If you think that’s unlikely, try and imagine a black American president before 2008. During the 1970s, stand-up comedians used to say “President Reagan” to get audiences cracking up. Like Jindal, Reagan was known for his irrational outbursts in his early political career.

If Jindal somehow squirms his way to the top, he is likely to introduce nausea-inducing neocon spin into mainstream American politics that will make Reagan look like a socialist in comparison.