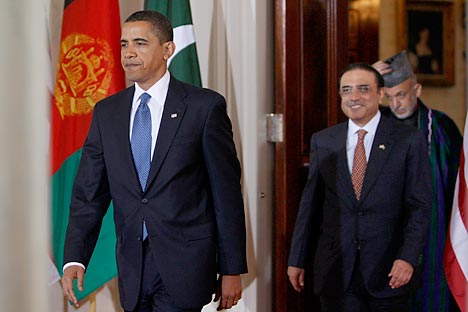 What one can expect from Pakistan in the coming days and weeks will be a step forward to re-engage the US politically via the resumption of the peace talks.

For the first time, there has been a public estimation by Washington of the actual ‘damage’ being inflicted on the United States by Pakistan’s closure of the two transit routes via its territory for the military supplies for Afghanistan. Secretary of Defence Leon Panetta put down 100 million dollars per month as the amount that the US needs to spend extra on account of the non-availability of the Pakistani routes. He also re-confirmed that the Northern Distribution Network cannot be a substitute for the Pakistani routes. Panetta revealed that the US’ dependence on the Pakistani routes in material terms works out to 30 percent of the total flow of war materials.

Obviously, Panetta’s testimony at the US Senate appropriatiosn committee makes it clear that the pulling out of the negotiators from Pakistan in no way meant that the file is closed. In other words, negotiations will resume sooner than later. The compulsions are very strong – for both sides.

No doubt, Pakistan also seems to be in a mellowed mood, signaling that the tariff issue for the transit routes is not so much the sticking point as an apology from the US for the November massacre of the Pakistani troops in US airstrikes. In sum, an apology by President Barack Obama could save the US exchequer the princely sum of $1.2 billion. Will Obama mellow since money is involved?

The conference in Kabul among the ‘Heart of Asia’ countries on Thursday would have given an opportunity for the Pakistani foreign minister Hina Rabbani Khar and the US Deputy Secretary of State William Burns to have an exchange of views to kickstart the negotiations that are at a standstill following the withdrawal of the US negotiators.

Conceivably, Khar and Burns would also have reflected on the path ahead in political terms. The fact is, the peace track has run aground. Interestingly, while harping on the need to kickstart the peace talks during his speech at the Kabul conference today, Afghan President Hamid Karzai singled out Pakistan and Saudi Arabia as the two countries that Kabul regards as meaningful interlocutors to initiate some moves. (Karzai ignored Qatar.)

What one can expect from Pakistan in the coming days and weeks will be a step forward to re-engage the US politically via the resumption of the peace talks. It will be a sound strategy as Pakistan would factor in that the US is keen to resume the engagement of the Taliban. The upcoming ‘transition’ in Afghanistan is meaningless for the US without a resumption of the peace talks and the post-2014 scenario will remain gloomy without the reconciliation of the Taliban.

However, the issue is going to be whether Taliban or/and Pakistan could come to terms with the long-term US military presence in Afghanistan. The opening of the US consulate in Herat in western Afghanistan (which Iran considers to be within its ‘sphere of influence’) on Wednesday, which Burns attended, is yet another affirmation by Washington that the US isn’t going anywhere from the Hindu Kush for a very long time to come, no matter what the Taliban or Pakistan and other regional powers might say or do.