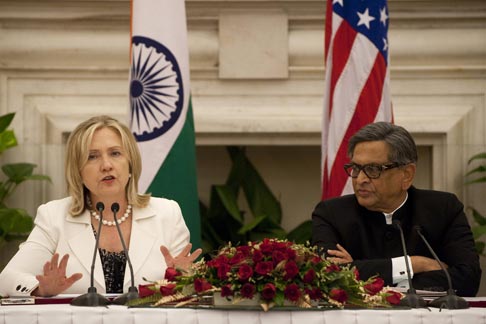 Simply put, the US wants India to allow greater access to American firms. Krishna made a valiant attempt to hold out assurances of providing “level playing field” and to promise that Indian economy would bounce back but the US business leaders do not appear convinced.

At the joint by press conference by the two foreign ministers – Hillary Clinton and S. M. Krishna – who co-chaired the third session of the United States-India Strategic Dialogue on Tuesday in Washington, not a single American journalist present asked about the event.

At last year’s session of the US-India Strategic Dialogue, President Barack Obama dropped by at the US state department building to say ‘hello’ to Krishna, but this time although he was in the city alright and even probably came to the building where Krishna happened to be, it was only to meet a group of donors for his election campaign.

A wrong impression may form that the lamentation during the recent months regarding a drift in the US-Indian relationship might after all be valid. The Economist magazine assessed the US-India Strategic Dialogue as an effort to “try to define a new sort of relationship” where the “impetus” seems to have drained out, but the two countries, although “less than allies”, still remain “more than friends”.

The relationship has consolidated as a factor in the Asian power dynamic. The political will exists undoubtedly on both sides to build on the relationship. There are no vested interests or lobbies in either country whittling away at the relationship. On the contrary, it seems a uniquely “popular” relationship among the elites. So, why is it losing the ‘impetus” that the George W. Bush administration injected into it by proposing, in 2005, international acceptance of India’s civil nuclear program?

Part of the reason why euphoria was lacking at the Strategic Dialogue this week could be that leaderships are far too preoccupied currently with their existential problems in domestic politics. But Clinton has a way with words to choreograph the new relationship. She called it a “new and mature phase… one defined by near-constant consultation… and working through the inevitable differences … [in] steady, focused cooperation” without the need for “dramatic breakthroughs that marked earlier phases” of the relationship.

There were no “dramatic breakthroughs” this week. The US once again voiced unease over the implications of India’s nuclear liability legislation – although the Indian side eagerly cited the signing of a Memorandum of Understanding between the Westinghouse and the Nuclear Power Corporation of India just this Monday committing both sides to negotiate an Early Works Agreement for the preliminary licensing and site development work associated with the construction of the new Westinghouse reactors in Gujarat state as “tangible progress” on nuclear energy cooperation, which “should put at rest some of the interpretations and some of the confusion that was prevailing.”

Clinton didn’t publicly share Krishna’s happiness that “nuclear commerce is now beginning to expand itself and we [India] hope more Indian and American companies will be involved in the course of the coming months.”

Again, India repeated appreciation for the “strong support” by the US for India’s full membership of the four multilateral export control regimes – Nuclear Suppliers Group, Missile Technology Control Regime, Wassenaar Arrangement and Australia Group – but the US made no further pledges and merely noted the steps India has taken in “pursuing outreach with each of these regimes.” The US didn’t make any pledges either to help India secure a permanent membership of the United Nations Security Council.

Of course, it is unrealistic on India’s part to expect Washington to “deliver” in a multipolar world setting, but then, if one were to hark back to the halcyon days of the US-India nuclear deal of 2008, a glaring shortfall appears in the fulfillment of expectations raised at that time.

Equally, despite the big push from the US side, a “high standard” Bilateral Investment Treaty couldn’t be concluded. Meanwhile, both sides continue to reaffirm their “desire to strengthen defence cooperation through increased technology transfer, collaborative joint research and development, and co-production of defence items.” Much still remains stuck in the realm of hopes and desires and wishes.

Two subtexts of the Strategic Dialogue mattered most to the US side – bolstering bilateral trade and investment and expanding the sale of weapons. Trade in goods and services reached $58 billion dollars in 2011 and the Americans hope to tilt the balance tip in their favor. (China did more trade with India – $74 billion.)

But the US companies feel frustrated about the caps on foreign investment in India and on regulatory uncertainty and policy gridlock. It didn’t help matters that on the eve of the US-India Strategic Dialogue, Standard & Poor’s warned once again that India could be edging close to being downgraded to junk status.

The White House decided to do some plain speaking. The US deputy national security advisor for international economic affairs Michael Froman said in the presence of Krishna at an open meeting of the US-India Business Council on Tuesday that US companies have grown increasingly “concerned about the economic relationship, fearing that the investment environment has deteriorated, that domestic political challenges are slowing the pace of reforms [in India].”

Froman pointedly urged the Indian Prime Minister Manmohan Singh to recommit to economic reforms and market opening “as the best way to assure our [US-Indian] bilateral relationship continues to deepen and broaden and the best way to ensure that India’s place as an emerging power remains secure.”

Energy figures as the single most interesting sector and India’s portfolios at the US’ two of the most important overseas investment agencies – Overseas Private Investment Corporation and the Export-Import Bank – are expected to become the largest in the near term. Clean energy, nuclear energy and the so-called shale gas – all these are engaging the attention of the US business. The Strategic Dialogue devoted a special session to energy.

The signing of the MOU with the Westinghouse probably gains for India some respite from mounting US pressure to ensure American companies begin to reap the benefits of the 2008 nuclear deal. To quote the assistant secretary with the US state department Robert Blake, “US civil nuclear firms are poised to play a significant role in the 40 billion dollar commercial nuclear sector as the Indian government seeks to add 14 new power reactors in the next five years.”

Froman also listed that the landmark nuclear deal has so far failed to deliver the lucrative contracts it promised to American companies. More talk in this vein can be expected when the US Treasury Secretary Timothy Geithner visits New Delhi at the end of June.

Simply put, the US wants India to allow greater access to American firms. Krishna made a valiant attempt to hold out assurances of providing “level playing field” and to promise that Indian economy would bounce back but the US business leaders do not appear convinced. The new chairman of the US-India Business Council and CEO of MasterCard Worldwide, Ajay Banga commented caustically, “Disturbing flip flops and increasing signs of an absence of predictable investment and business climate … are hampering India’s progress and scaring away foreign investment.”

In the near term at least, taking into consideration the great fluidity in Indian politics in the period ahead, it will be an uphill task for Indian Prime Minister to rise to the White House’s high expectations of accelerating the US exports to the Indian market. The Indian economic milieu will ultimately determine the prospects of the ruling coalition in the next general election, which is hardly 2 years away. Neo-liberal economic policies will come at a high political cost. Therefore, India’s options have narrowed to one of giving as large a share as possible in the Indian market for the US arms exports, which, hopefully, would please Washington and ease the growing pressure for “reforms”. But then, this is already happening. Again, nuclear commerce has a long gestation period. Simply put, this is a lean season for the US-Indian economic relationship and President Barack Obama is a man in hurry to promote exports and create jobs.

Besides, cracks have appeared in security cooperation. The US continues to stonewall Indian requests for access to the two terror suspects in US custody who they implicate in the 2008 attacks on Mumbai – David Headley and Tahawwur Rana. Also, the US is apparently fighting shy of sharing with India any information as regards what it has done (or failed to do) to follow up on the case of the Pakistani Islamist leader Hafiz Saeed on whom the Obama administration recently placed a $10 million bounty in a trail of media publicity in India. (India alleges that Saeed masterminded the Mumbai terror strikes in 2008.)

Unsurprisingly, the long-winded joint statement of the Strategic Dialogue strives to convey the impression that a highly productive discourse just ended, but on closer examination, it happens to be, by and large, a cataloguing of activities in the past year and is more like a status report.

Even there, the most glaring omission hits the mind’s eye: not a word has been said in the joint statement about the US’ “pivot” to Asia and the consequent “rebalancing” of the American forces, which, arguably, forms the hard core of the US’ regional strategy in Asia. Evidently, India didn’t feel comfortable to be identified with the US’ grandiloquent strategy, which has been heavily criticized by China.

This unspoken disharmony over a core geostrategic issue alone should underscore the complexities of the US-Indian relationship. Just before Krishna travelled to Washington, he undertook a visit to Beijing where he made a forceful pitch for India’s membership of the Shanghai Cooperation Organization (which the US sought to stifle in its cradle as a rival regional security organization). And, no sooner than the Strategic Dialogue ended in Washington, he headed for a 3-day visit to Cuba (a country which the US regards as a pariah state for half a century).