US to apologize to Pakistan 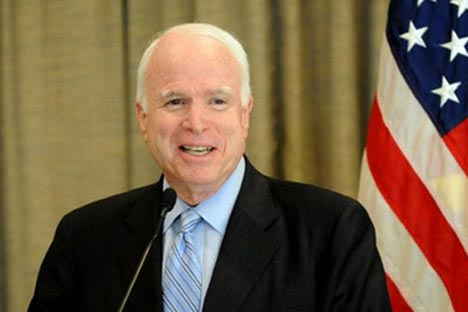 Senator John McCain suggests that the US should prioritize its national interests: Pakistan is the US’ key ally today and now, while India could be the ally of tomorrow or the day-after-tomorrow.

One could borrow Mao Tse-tung’s famous words and apply them aptly to the United States – Pakistan relationship, which is also like China’s with North Korea, an inseparable entanglement “as close as lips and teeth.”

One important outcome of the ‘Hearts of Asia’ conference in Kabul on Thursday could be that the US-Pak ‘normalization’ process is getting under way.

When things get difficult for the United States in certain theatres (such as Afghanistan), it is often the case that Britain appears from nowhere to ease the path ahead. The timely visit by the British Foreign Secretary William Hague to Islamabad early this week certainly helped inject rationality into the emotion-charged US-Pakistan standoff. Hague demonstratively ticked off Washington’s handling of matters when he said in Islamabad, “as a friend of Pakistan, I want to urge a greater understanding of Pakistan and the challenges your country faces.”

Britain ensured that Pakistani Foreign Minister Hina Rabbani Khar and the US Deputy Secretary of State William Burns got together in Kabul on the sidelines of the conference on Thursday. The opinion piece entitled “Pakistan, UK and peace” in the Pakistani daily News by Adam Thomson, Britain’s high commissioner to Pakistan, gives the distinct impression that things are on the mend.

Khar of course made a spirited demand for ‘unconditional’ US apology for the November massacre of Pakistani troops by the US. She did it ably in her speech at the Kabul conference so that no one is in doubt in Pakistan (including Imran Khan) that the government is dictating a pre-condition to the US (which is a superpower) and safeguarding Pakistan’s national honor before it reopens the transit routes for the NATO.

Meanwhile, in Washington, too, there are stirrings. To be sure, Hague briefed the Americans on his mediatory mission and suggested that the right thing to do is to strike when the iron is hot.

But it is also a tricky decision for the Barack Obama administration – and to the president personally – to apologize so soon after snubbing Pakistan’s president at the NATO summit in Chicago. This is where some ‘bipartisan’ Congressional urging on Obama may help. Obama needs to make sure that his audible apology that will indeed ring through the valleys and mountains of the Hindu Kush doesn’t cost him politically in an election year.

At any rate, two influential voices on the Hill have just spoken, urging Obama to go ahead and do the right thing – apologize. Senator Dianne Feinstein, who heads the powerful Senate Intelligence Committee, says, “National Security of the US will be better served with a positive relationship with Pakistan.” She counseled that mistakes have been made by both sides and “with some civilian acceptance of the mistakes”, the NATO’s transit routes could be got re-opened.

But what is of greater interest is the statement by Senator John McCain, who has accused the Obama administration of needlessly damaging the US-Pakistan relationship. He pointed an accusing finger at the Obama administration for egging India on in Afghanistan. “I would have nurtured this relationship with India sort of the way we have been for years, rather that sort of antagonizing the Pakistanis even more with this kind of in your face attitude.” McCain agreed that the US should have a ‘close relationship” with India, but he would “do it more quietly” as India could be a “very important ally to us in the future. And they are a democracy.”

In sum, McCain suggests that the US should prioritize its national interests: Pakistan is the US’ key ally today and now, while India could be the ally of tomorrow or the day-after-tomorrow. McCain’s remarks are here.