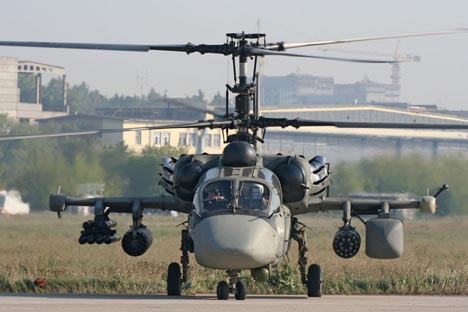 It is planned that the Russian air forces will receive 600 new airplanes and 1,000 helicopters by 2020. Among these helicopters, there will be a new brand called Ka-52, or The Alligator, produced by famous Russian helicopter company Kamov. This is a modification of a one-pilot helicopter Ka-50, which has been exploited in the Russian army for about 30 years.

In the early 1990s, a film called “The Black Shark” appeared on the screen in Russia. The film narrated about a crew of a military helicopter, and the helicopter filmed in this movie was Ka-50. The film was very popular, even several computer games, based on this film, appeared. Since then, the Ka-50 helicopter was dubbed “Black Shark.”

According to the NATO classification of helicopters HokumA, Ka-50 can strike armored vehicles, planes and helicopters, and troops.

The new modification of Ka-50, called Ka-52, has a number of advantages, comparing not only to its predecessor, but with similar helicopters, produced in other countries, as well.

As it has already been said, Ka-50, or “The Black Shark,” was a one-pilot helicopter. Ka-52, or “The Alligator,” is meant for two pilots. Besides, “The Alligator” has two propellers on one axis, one under another, which is a more reliable construction.

“Helicopters of the Kamov company have two propellers, while US helicopters, as well as ones produced by another Russian company, Mil, have only one. This makes the Kamov helicopters more reliable, both in the air and while landing. Besides, the Kamov helicopters are equipped with many various kinds of weapons – machine guns, small-caliber guns, guided and non-guided missiles and even bombs.”

“The Alligator” is equipped with an up-to-date aiming system. It can receive clear images of objects at day or night and in any weather. Thanks to this system, the helicopter can precisely strike targets of the size of 15 cms from the distance of 3 or 4 kms.

It is expected that the Russian air forces will already receive several “Alligators” very soon.

At present, many countries are trying to create similar helicopters of their own – the US, the UK, France, China, India, Japan and South Africa.

“With so many foreign competitors, Russian producers of helicopters have to try really hard for their production to be the best. However, it is already one step from being certain that Turkey will purchase several “Alligators” from Russia. At least, it has already several times expressed the wish to purchase them. Other potential purchasers are Thailand, Malaysia and Indonesia.”

Meanwhile, Russia is going to purchase 4 large landing craft carriers “Mistral” from France. It has already been decided that these vessels will be equipped with Ka-52K helicopters. Besides other advantages, these helicopters are compact because they can fold the blades of their propellers.