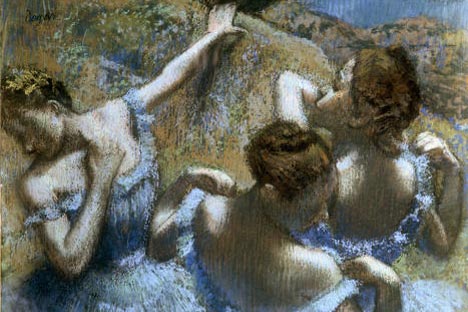 The Pushkin Museum of Fine Arts is a treasure-trove of paintings and sculptures.

When it comes to great museums in Russia, most people would first think of the Hermitage in St Petersburg with its wealth of fine art. The Pushkin Museum of Fine Arts in central Moscow can more than stand its own ground with the best museums in Europe and has a collection of over 650,000 paintings, sculptures, numismatic items and other works of art.

The museum, which recently turned a 100, has nothing to do with the celebrated Russian poet Alexander Pushkin, but was the brainchild of Professor Ivan Tsvetaev, father of another renowned Russian poet Marina Tsvetaeva. The professor persuaded Yury Nechaev-Maltsov, a business baron of the early 20th century to donate over 2 million roubles to construct the museum, which was initially named after Czar Alexander III. The Soviets renamed the museum while celebrating Pushkin’s centenary in the 1937.

Spread over three buildings, the main building has a collection of sculptures from ancient Greece. Regular visitors comprising of school children and art students marvel at the ancient works including a 5th BC statue of a horse driver from the shrine of Apollo in Delphi. There are also sculptured depictions from the same era of the temple of Zeus at Olympia and copies of Critius and Nesiotes bronze sculptures. The main building also houses Italian, Aegean, French and Spanish art.

For those who haven’t seen Michaelangelo’s David at the Academic Galleria in Florence, a wonderful replica dons the Moscow museum. Italy is also represented by Boticelli’s The Annunciation and Guardi’s Alexander the Great by the Body of Persian King Darius. The main building also has an ancient Egyptian hall with weapons, ritual items, tombstones and excavated mummies.

For visitors to the Louvre, the Mona Lisa is the piece de resistance and when it comes to the Academia Galleria, visitors tend to ignore everything in a quest to find the original David. If one painting stands out at the Pushkin Museum it is the The Red Vineyard at Montmajour, the only painting that Vincent Van Gogh managed to sell in his lifetime. The painting, which was completed in 1888, was sold for 400 francs in Brussels (around a thousand US dollar’s worth today). There’s little wonder that the Dutch genius felt unappreciated in his lifetime.

Many of the paintings in the Pushkin Museum were moved there from the Hermitage when the Russian capital was relocated to Moscow in 1918. Other paintings were seized from Ivan Morozov and Sergei Shchukin, both well-heeled collectors in Czarist Russia, in the aftermath of the Bolshevik Revolution. Thanks to these two men, the collection at the museum is an art’s student’s dream and has works from: Claude Monet, Edouard Manet, Pablo Picasso, Georges Dufrenoy, Paul Gauguin, Edgar Degas, Gustave Courbet, Paul Cezanne, Jean-Jacques Rousseau, Henri de Toulouse-Lautrec and Henri Matisse! Several of Picasso’s paintings are from the Blue Period. The set of classics, which include Rousseau’s Jaguar attacking a Horse and Cezanne’s Pierot and Harlequin, are all housed in the Museum of Private Collections.

It can take days to see the museum, which also houses the works of Dutch and Flemish painters such as Peter Paul Rubens and Anthony Van Dyck. There are also a few Rembrandts including his Portrait of an Old Woman, where he is believed to have painted his sister-in-law.

Over the last few years, the museum has been holding several temporary exhibitions from its holdings along with works held by other great museums. These initiatives are usually supported by the diplomatic missions of the artist’s origin countries.  Svetlana Medvedeva, wife of then-President Dmitry Medevdev inaugurated a Picasso exhibition with works from the Picasso National Museum in Paris in 2010. The museum’s website which is regularly updated has versions in 7 languages.

While going to the obvious tourist destinations, visitors to Moscow often overlook some of its fine museums and art galleries, but skipping the Pushkin Museum during a Moscow visit would be the equivalent of visiting Paris and not going to the Louvre.