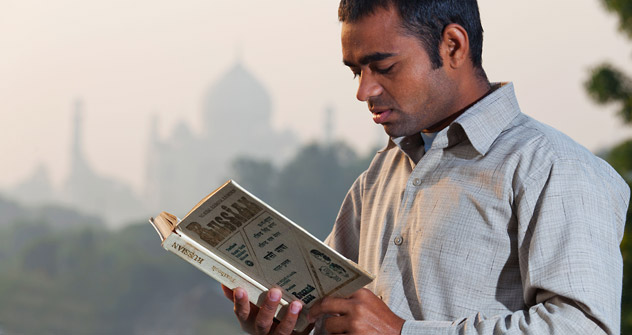 Foreigners coming to work in the U.S. are obliged to not only speak English, but also know the nuances of slang. In Russia, however, only a few foreign managers learn the Russian language and their Russian colleagues do everything to make their life easier.

Luke Jones, a partner at the Antal Russia recruiting company, learned Russian during his university years in the UK. When he came to Russia, however, he realized that the knowledge he had was not enough; he knew no profanities or slang.

“An angry administrator lady in my hotel was swearing with the words I couldn’t find in any of my books,” he said. “I could do without Russian in my job. But I’m a perfectionist by nature. So I decided to learn the language to be able to communicate with my colleagues freely.” Today Jones has a perfect command of Russian and even uses well-timed slang words. “The difficulty is not in the slang, but in the Russian mentality that is hard to understand for foreigners,” said Jones. He believes that only about 10 percent of foreigners coming to Russia can speak Russian well enough to function in the country and of those, only 1 percent can hold negotiations in Russian. “Most managers come here for a short period of time. They do not need to learn Russian. After all, they will soon leave for another country,” he said.

Evgeny Merkel, managing partner of Excellion Partners International, observes that international managers today are particularly interested in learning Chinese and that they are likely to learn the national language if they live in Germany or France, for example. “But they won’t learn Russian in Russia. Perhaps it’s too difficult for them,” said Merkel. There are economic and cultural causes behind this reluctance of foreigners to learn Russian. According to Maxim Krongauz, the director of the Linguistics Institute at the Russian State University for the Humanities says that Russia is no longer the international trendsetter in linguistics. Moreover, “the Russian language today is actively borrowing plenty of English words to denote new notions and products developed in the West, since we don’t have original Russian words for those,” he said.

A manager of the Globus International language center, which offers Russia courses for foreigners, says that most foreign students don’t want to learn to read or write in Russian, just speak. “A number of senior managers of foreign companies study at our school. They are mostly people over 32 who only started learning Russian in order to earn the respect of their Russian colleagues or surprise their Russian partners. They do not need Russian to actually do business in Russia. Most Russian managers speak English,” she said.

This situation is quite the reverse in the United States. There, a foreign manager is expected to not only speak English, but also be able to use the trendy and popular slang. Vladimira Gueren, who moved to Palm Coast, Florida, from the Czech Republic four years ago, says that proper use of English is extremely important in establishing relations and communicating at work. “If you don’t know the idioms, your co-workers say: ‘Oh, God! Who is this?’ she said.

Over the past 10 years, instructors at the international Berlitz Language Schools have been encouraged to pay more attention to the context in which terms are used, so that students learn to understand how to use them, said Shawn Scott, North America's instruction director at Berlitz International. “Our students can read the idioms, but still do not understand the meaning,” he said. At Kennesaw State University in Georgia, the Intensive English Program does not teach slang expressions that are in use for less than one generation, however, such slang can already be outdated outside the classrooms. For example, this academic year, the students of the Chicago branch of Berlitz Language Schools learned the meaning of “skedaddle.” The word dates back to the U.S. Civil War.

Rana Al Ruhaily, 29, a doctor who moved to the U.S. from Saudi Arabia last year, believes that the best way to learn English is by listening to TV shows. Another popular method is to learn English online. John Hayden started the English, baby! website where he publishes slang expressions and their explanations for foreigners.

The situation in Europe is different. There, slang is restricted to certain companies and situations, and excessive use of slang will denote a lower social level of a person, said Merkel of Excellion Partners International. “I came to Europe having a good command of foreign languages, since I had graduated from MGIMO [the Russian State Institute of International Relations]. There were individual slang words that I didn’t understand. But communicating, watching TV, reading books was enough to fill the gap,” he said.

The British approach to teaching Russian is poor, said Jones of Antal Russia. “The first thing you get is the table of case grammar, and that’s where many lose their enthusiasm,” he said. Further lessons only get harder. “It took five years for me to grasp the difference between ‘nichego’ (nothing) and ‘nechego’ (no need). And I only learned the word ‘ponty’ (show off) after 10 years of learning Russian.”

Russians are partially responsible for making it easy for foreigners to go without learning the language. Most Russian managers working in international companies speak English, said Galina Rogozina, partner and head of the leadership development practices firm RosExpert. And if a foreigner does speak Russian, Russians avoid using slang when communicating. The manager at Globus International said that for their part, foreigners who have been living in Russia for a long time get used to conversing with Russians in simpler and easy-to-understand English. Corporate slang also make is easier to communicate. “It’s a universal language, a mix of Russian words and English terms. It is especially common in the FMCG sector companies,” said Rogozina.

Krongauz of the Russian State University of the Humanities disagrees. “Corporate slang is only slightly helpful for office interaction, since foreign words adopted into the Russian language transform so profoundly that an American or a British person can find it difficult to understand them,” Krongauz said. He gave the example of “piarshchik” (PR expert), which has also given rise to the verb “piarit” (to promote). Neither of the words sounds similar to the original abbreviation – PR.

Nevertheless, foreigners working with Russian companies have been seeking to learn business Russian, said Yulia Amlinskaya, an independent instructor and founder of online Russian language course Russificate. When these students start speaking Russian, they often find themselves in funny situations. For example, one of Amlinskaya’s students called the Ded Moroz (Father Frost) at a corporate party a Gad Moroz (Bastard Frost), mistakenly using the swear word he had heard somewhere else. “These embarrassing situations motivate students to learn the language better, and they ask more questions regarding non-print expressions,” Amlinskaya said.